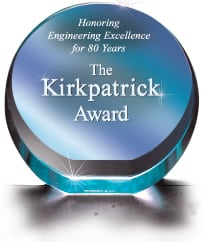 The 2019 Kirkpatrick Award for Chemical Engineering Achievement will be bestowed during the Chem Show on Wednesday Oct. 23 from 11:15 AM to 1:00 PM in Room 2D12/13. The award has been given by Chemical Engineering every other year since 1933 to recognize the most noteworthy and important chemical process technology commercialized in the previous two years. The six award finalists will present their technologies at the session, and the winner will be announced following the presentations. Here is a brief summary of the six finalist technologies:

Braskem — Renewable EVA. A partially renewable ethylene vinyl acetate (EVA) was co-developed with Allbirds (a shoe company), where sugarcane, instead of oil was used as a raw material. A process was developed to produce a wide range of EVA and EVA-rubber products using a polymer plant that was designed to produce polyethylene. A commercial product using the new EVA was launched in 2018.

Dow Packaging and Specialty Plastics — Symbiex adhesive technology. The trademarked Symbiex technology creates multilayer packaging for foods and more by gluing together layers of different plastics to create a laminate. Developed together with Nordmeccanica, this is a new lamination concept where the two parts are not mixed prior to application, but are applied independently. The cure starts when the two coated films are brought together to form the multilayer film.

Johnson Matthey — Catacel SSR Structured Steam Reforming Catalyst. An increased demand for hydrogen has operators of steam methane reformers (SMRs) pushing their systems to maximum capacities and experiencing limitations in temperature, pressure and feed flows. The patented Catacel SSR is a catalyst-coated metal foil alternative to catalyst-impregnated pellets that can decrease pressure drop, and increase heat transfer and catalytic activity. Overall plant throughput can be increased up to 20% without capital investment for a new plant.

LanzaTech — Gas Fermentation Technology. This process converts carbon-rich gas streams to products using proprietary microbes that feed on gases rather than sugars, as in traditional fermentation. The source of the gases can include industrial emissions and more. LanzaTech’s process takes waste carbon and produces chemicals that serve as building blocks for products such as rubber, plastics and fuels. Third-party assessments have shown greenhouse-gas-emissions reductions by over 70% compared to equivalent products from fossil carbon.

Reliance Industries — Simultaneous Production of Benzene and Gasoline from C-6 Heart Cut of FCC Gasoline. To meet the low levels of benzene allowed in gasoline, Reliance Industries and the Indian Institute of Petroleum jointly developed technology for processing the C6 heart cut of FCC (fluid catalytic cracking) gasoline based on the principles of extractive distillation without the requirement of a pre-processing step. Said to be the first of its kind, this technology produces gasoline that meets U.S. benzene limits, while also recovering high-purity benzene.

TechnipFMC — Direct Heating Unit (Flameless Combustion). This technology, jointly developed with support from Total Petrochemical and Shell Oil, is said to be a groundbreaking technology for adding heat to high-temperature processes. Unlike conventional furnace burners where fuel and air are combined at a single point, in this process, fuel is added incrementally to a high-velocity air stream via multiple injections over an extended reaction zone. As a result, the fuel reacts in a controlled manner at significantly lower temperatures than classic combustion