Changing from a conventional mixer to an ultra-high-shear mixer led to improved dispersions, increased production capacities, and reduced electricity and labor costs

As the days get sunnier, people will be looking to sunscreens to protect their skin from the harmful effects of the ultraviolet (UV) rays of sunlight. This is especially true in Australia, where the UV index — a measure of UV intensity (ranging from 0 to 11+) — can be very high. However, a number of ingredients used in commercial sunscreens, are now under scrutiny by the U.S. Food and Drug Administration (FDA; Silver Spring, Md.; www.fda.gov), and may be banned, forcing producers to turn to zinc-based or other alternative blocking agents, which are “generally recognized as safe and effective (GRASE),” according to the FDA.

For Geoff Acton, managing director at Advanced NanoTek Ltd. (ANO; www.advancenanotek.com), the quest for safer alternatives is more than a business — it is a personal advocacy. He is a skin cancer survivor, having undergone more than 30 skin-cancer procedures. “I understand that the sunscreens I used as a child were chemical based suncreens, and may have contributed to the majority of my current issues,” he says.

ANO was formed in 1997 to commercialize advanced materials technology originally developed by the University of Western Australia. The technology was first scaled up via a joint venture with Samsung Corning Co. in 2000–2004, and has since been a stand-alone operation. The company manufactures zinc-oxide powders (5,000 metric tons per year (m.t./yr) capacity) and ZnO dispersions for zinc-based skincare and sunscreen end products.

For dispersing ZnO into various oils and emulsifying systems, the company had first used a conventional ball mill using various media since 2003. However, these conventional mixers were proving labor intensive and slow. So the company turned to Charles Ross & Son Company. (Hauppauge, N.Y.; www.mixers.com) to improve the dispersions.

Acton and his team made several visits to Ross in New York, and Ross performed laboratory tests for ANO. “My world changed meeting Ross,” says Acton. “Our chief scientist, Dalia Mizikovsky, identified the X-Series Ultra-High Shear Mixers Ross Mixer [Figure 1] as a potential piece of equipment that could improve the performance of our powder when mixed with ingredients and oils,” explains Acton. “When it came time to install the equipment, they [Ross engineers] were able to assist through Skype at very weird hours to handle the time difference between Australia and New York. After initial trials and error, ANO is very excited with the outcomes, he says. “With the X-Series, our product dispersions have improved, and it has enabled ANO’s business to increase production capacity by more than double, while reducing the electricity and labor costs. Furthermore, it has enabled us to manufacture bulk intermediate sunscreen, which the current ball-mill system could not.” 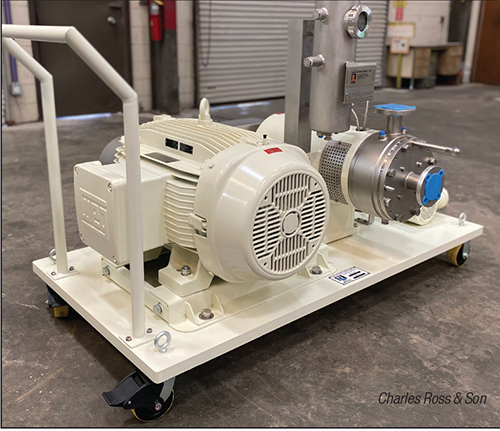 The X-Series Ultra-High Shear Mixer uses a patented design (U.S. Patent No. 5,632,596). The combination of high tip speed and extremely close tolerances between the interlocking channels subjects the product to intense shear in every pass, explains Christine Banaszek, sales manager at Ross. The gap between adjacent surfaces of the rotor and stator is adjustable for fine-tuning shear levels and flowrates. Turning at tip speeds of over 11,000 ft/min, the X-Series rotor consists of concentric rows of intermeshing teeth. Product enters from the center of the stator and moves outward through radial channels in the rotor/stator teeth.

Compared to alternative rotor/stator mixers, fewer passes are required to achieve a good dispersion with the X-Series. As a result, not only is the time required to produce the dispersion reduced, but less energy is required. This translates into lower operating costs and higher productivity, says Banaszek.

Despite the impacts of COVID-19 on sales, ANO has recently ordered its fourth mixer. “We now have 540 kg, 216 kg and two laboratory-scale 60-kg mixers,” says Acton. “We absolutely recommend to any manufacturer working to mix uncoated zinc-based powders into their products to please consider the Ross mixer.”

Related Content
A broad range of mixers for sanitary processing
This company’s sanitary mixers for pharmaceutical applications (photo) feature 316 stainless-steel shafts and polished impellers, making them ideal for applications…
Vertical blenders for sanitary applications under vacuum
This company’s sanitary vertical blenders (photo) are engineered for rapid homogenization and drying in delicate applications under vacuum. The design…
Application-specific liquid-mixing systems
This company’s B Series of liquid mixing systems (photo) are designed for blending, solids suspension, gas dispersion, heat transfer and…
A sanitary rotary mixer that is washdown-rated
The Model MX-5-S316L sanitary rotary-batch mini-mixer (photo) can de-agglomerate and blend up to 5 ft3 of dry bulk ingredients with…
Lödige receives major order for Asian chemical company
Despite the economic effects of the coronavirus pandemic, Gebr. Lödige Maschinenbau GmbH (Paderborn, Germany) has received one of the largest…