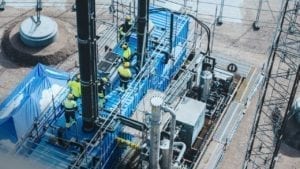 The test unit is part of the ‘Preem CCS’ pilot project which will analyze the whole value chain from capture to storage of carbon dioxide (CO2). The project aims to enable more companies to utilize carbon capture and storage (CCS) technology and reduce their CO2 emissions.

The project is a collaboration between Preem, Sweden’s largest fuel company, Aker Solutions, Chalmers University of Technology, Equinor and the Norwegian research institute SINTEF. The Swedish Energy Agency and the Norwegian research and development program CLIMIT contribute with funding. Aker Solutions has previously announced carbon capture projects for a waste-to-energy plant in the Netherlands, an ammonia plant in Norway, and a cement plant in Norway.

Within the pilot project, the entire value chain will be evaluated; from capture at the refinery, local storage, transport to the planned storage location off the Norwegian west coast and for the storage itself. The results of the pilot project will then be made public – in order for more companies to be able to use the technology and reduce their CO2 emissions.

The mobile test unit will during 2020 capture carbon from flue gases coming from Preem’s hydrogen gas plant at the Lysekil refinery on the west coast of Sweden.

“We are excited to bring our field-proven carbon capture technology to Sweden for the first time,” said Luis Araujo, chief executive officer of Aker Solutions. “Helping operators reduce their carbon footprint is a key part of Aker Solutions’ strategy, and we look forward to working with Preem and the other partners on the Lysekil refinery.”

The technology for capturing and storing carbon dioxide is an important component for reducing greenhouse gas emissions and for achieving Sweden’s climate goals. For Preem, this is an important piece of the puzzle to reduce CO2 emissions and to become climate neutral by the year 2045. The goal is for the tests to form the basis for a full-scale CCS plant that can be operational by 2025.

“We see carbon capture and storage as a vital measure to reduce global carbon emissions. For Preem, a full-scale CCS plant could initially reduce emissions from our Lysekil refinery by 500,000 metric tons annually, which is close to one-third of the refinery’s total CO2 emissions per year,” said Petter Holland, chief executive officer of Preem.