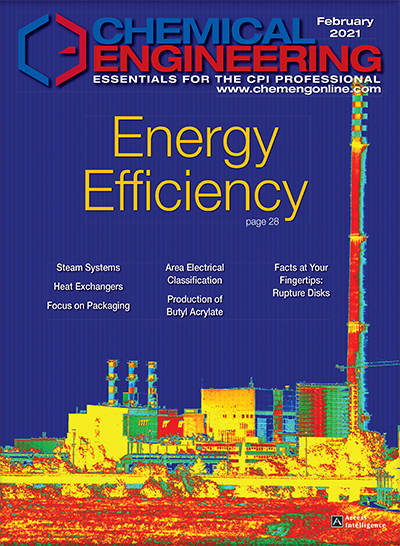 Printing sensors onto stickers
Advanced sensors are crucial to any predictive maintenance strategy, and…
BUSINESS NEWS

A tool for device commissioning and advanced certification
The new Opticheck DTM (photo) was recently introduced for device…
Highlights The 2021 Kirkpatrick Award: Call for nominationsAddressing climate changeFacts at your Fingertips: Temperature and Rupture Disk Burst PressureTechnology Profile: Butyl Acrylate from Acrylic Acid and ButanolFocus on Packaging

One important challenge that continues to receive the attention of scientists and engineers worldwide is the creation of a more sustainable environment. The U.S. Environmental Protection Agency (EPA; www.epa.gov) recognizes achievements in this area through the Green Chemistry Challenge Awards, which “promote the environmental and economic benefits of developing and using novel green chemistry.”

Last month, the 2020 recipients of these awards were announced. Details about the award and selection criteria can be found on the EPA’s website. The five winners of the 2020 Green Chemistry Challenge Awards are described here (Source: EPA).

Greener Reaction Conditions Award— Merck & Co. (Rahway, N.J.; www.merck.com) was recognized for improving the process used to produce certain antiviral drugs. The existing synthesis processes were inefficient due to poor chemoselectivity and the need for multiple reaction steps that involved expensive and hazardous reagents. Merck developed a catalyst that reduced the process to two reaction steps with a high purity yield. The new process is said to improve manufacturing efficiency and sustainability of one antiviral drug by more than 85%, with improvements in energy use, water depletion and other metrics.

Academic Award — Recognition was given to professor Steven Skerlos, from the University of Michigan and Fusion Coolant Systems (Canton, Mich.; www.fusioncoolant.com) for developing a technology that uses supercritical CO 2 for metalworking in place of traditional oil-based metalworking fluids. The traditional fluids can be difficult to treat after use, because they may contain hazardous additives, or heavy metals that may be picked up during the metalworking itself. The new technology developed at the University of Michigan, and being commercialized by Fusion Coolant Systems, uses little to no oil lubricant.

Small Business Award— Vestaron Corp. (Kalamazoo, Mich.; www.vestaron.com) received this award for the development of a new biopesticide that controls targeted pests with no adverse effects on the environment, people and wildlife. The novel insecticide is based on a peptide that is found in a spider’s venom. The peptide is produced by yeast fermentation using sugar derived from corn.■

Related Content
Looking ahead
This has certainly been a year to remember, and as 2020 comes to an end this month, I expect we…
Royal DSM and Neste enter partnership for bio-based, high-performance polymers
Royal DSM (Herleen, the Netherlands; www.dsm.com), a global science-based company in nutrition, health and sustainable living, today announced that it…
MOL Group completes new rubber-bitumen plant for recycling tire waste
MOL Group (Budapest, Hungary; www.mol.hu) announced that it has completed a rubber bitumen plant at the Zala Site, representing an…
Petrofac wins contract for green-hydrogen project in Australia
The Engineering and Production Services (EPS) business of Petrofac Ltd. (St. Helier, U.K.) has been awarded its first-ever green hydrogen…
Monolith plans carbon-free ammonia production plant
Monolith Materials (Lincoln, Neb.; www.monolithmaterials.com), a leader in clean energy and chemical production, today announced it plans to use its…