Digitalization adds value to compressor and blower units
AERprogress is a suite of customized digital services for compressors…
Highlights A Better Battery: An Overview of Solid-State TechnologiesOwning Your Career: Taking a Hard Look at 'Soft' SkillsAwarding 'green chemistry'Technology Profile: Isopropyl Alcohol Production from AcetoneFacts at your Fingertips: Cyclone Separators

BASF SE (Ludwigshafen, Germany) has developed a chemical recycling process for used mattresses and is starting pilot tests at the Schwarzheide site in Brandenburg, Germany. The materials from old mattresses are to be recycled in such a way that they can be used for the production of new mattresses. 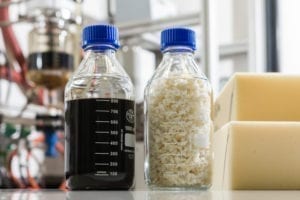 “The target is to recover the raw materials with a quality comparable to that of non-recycled/virgin raw materials”, says Shankara Keelapandal, Business Management Isocyanates Europe. In doing so, BASF is breaking new ground and responding to the raised expectations regarding sustainability of the foam and mattress industry as well as those of consumers. It is an important step to possibly re-enter post-consumer waste back into product lifecycles.

BASF’s process breaks down the flexible polyurethane and delivers the initially used polyol. From there BASF can produce new foam with a significantly lower carbon footprint, because fewer fossil resources are used. “It makes projects of that nature quite attractive because, while mattresses are easy to collect and to sort out, at the end of their lifecycle they currently end up being either incinerated or in a landfill, explains technical project manager Arno Volkmann. First volumes of the recycled material will be delivered to project partners later this year to develop pilot projects together. “The project is technically complex, but the potential to reduce waste volumes and save resources makes it all worth it” comments Keelapandal.

With the new process, BASF steps up its efforts to increase sustainability and takes one step further toward a circular economy. Aiming to decouple economic growth from the use of finite resources, BASF accelerates the adoption of the circular economy principle into its day-to-day operations. “This is why we develop a solution to closing the loop for soft polyurethane foam with the chemical recycling of mattresses,” adds Keelapandal.

In May, Dow announced plans to install an industrial-scale mattress-recycling facility, which will produce polyols via chemical recycling.