Perovskites are a class of synthetic materials that have a crystalline structure similar to that of the naturally occurring mineral calcium titanate. They have been the subject of many studies because they exhibit unique properties that can be tuned according to their composition. One of their potential applications is as catalysts for the synthesis of ammonia. For example, recently, perovskites with some of their oxygen atoms replaced by hydrogen and nitrogen ions have been developed as efficient catalysts for ammonia synthesis. However, the traditional synthesis of perovskites with such substitutions usually has to be carried out at high temperatures (more than 800°C) and over long periods of time (weeks).

To address these issues, in a recent study carried out at Tokyo Institute of Technology (TiTech; Yokohama Campus, Japan; www.titech.ac.jp), a group of researchers led by professor Masaaki Kitano devised a novel method for the low-temperature synthesis of one such oxygen-substituted perovskite with the general formula BaCeO3−xNyHz (diagram) and tested its performance as a catalyst to produce ammonia. To achieve this, they made an innovative alteration to the perovskite synthesis process. The use of barium carbonate and cerium dioxide as precursors involves a very high temperature that would be required to have them combine into the base perovskite, or BaCeO3, because barium carbonate is very stable. In addition, one would then have to substitute the oxygen atoms with nitrogen and hydrogen ions. On the other hand, the team found that the compound barium amide reacts easily with cerium dioxide under ammonia gas flow to directly form BaCeO3−xNyHz at low temperatures (300–600°C) and in less time (6 h). “This is the first demonstration of a bottom-up synthesis of such a material, referred to as perovskite-type oxynitride-hydride,” says Kitano. “Our results will pave the way in new catalyst design strategies for low-temperature ammonia synthesis.” 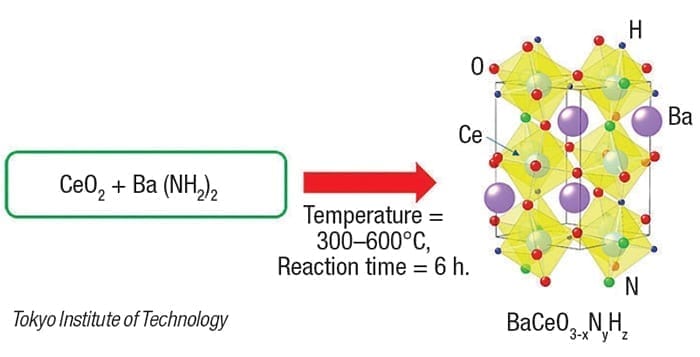 Related Content
A Pt-free electrode promises to cut costs for fuel cells and metal-air batteries
Hiroya Abe and colleagues at Tohoku University (Sendai, www.tohoku.ac.jp) and Hokkaido University have developed a method to fabricate a highly…
Cascade reactions on ‘nanozymes’ make chemicals from CO2
An international team of researchers has developed metallic nanoparticles that imitate enzymes to convert carbon dioxide into ethanol and propanol,…
Gas Fermentation Leads Honored Achievements
The winning technology for the 2019 Kirkpatrick Chemical Engineering Achievement Award, along with the other finalist technologies, demonstrate how innovative…
Novel catalyst for transforming polyethylene into lubricants and waxes
Efficient upcycling of post-consumer plastics, such as polyethylene (PE), is a key sustainability objective. New research by a team at…
Modifying waste biomass to catalytically degrade pollutants
Sewage and wastewater often contain pollutants and environmental hormones (endocrine disruptors) that can have a negative effect on the environment…