Busch Vacuum Pumps and Systems announced that it has provided Mink claw compressor technology to help optimize the separation efficiency of sand as well as grease and oils for a sand trap at a wastewater treatment facility in Poppenweiler, a district of Ludwigsburg, Germany. The new compressor was installed without the need to make modifications to the geometry of the sand trap. 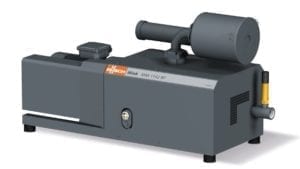 As the first treatment step in wastewater treatment facilities, aerated sand traps are an important process step for economical wastewater treatment. Separating out sand and other mineral materials protects downstream purification processes from damage caused by abrasion, blockages and, ultimately, from deposits.

The 15-m long sand trap from 1976 is still in use today. It had not recently been expanded or modified, and thus reached the limits of its output. This became noticeable due to sand deposits in the primary clarifier and in the downstream aeration tanks. This is why plant management began looking for a solution for optimizing the separation output of the sand trap as economically as possible.

Engineers calculated the necessary dimensions for a sand trap that would enable optimum separation of sand and suspended matter like oils and grease from the organic suspended matter. The result was that the sand trap would need to be at least three meters longer to reduce the flow velocity and thus achieve optimum separation. Rather than incur the substantial cots assocaited with construction costs and downtime to extend the trap, engineers considered the option of simply optimizing the circulation of the wastewater with aeration.

They wanted to change the turbulent kinetic energy caused by the rolling speed in the wastewater by changing the air volume flow, so they wanted to use the flow velocity to influence the vertical circulation of the wastewater caused by aeration and its forward motion. The already installed rotary lobe blower was not adjustable, and thus provided a constant volume flow at an overpressure of 0.5 bar.

The installed Mink claw compressor solution was outfitted with a variable-speed drive. his compressor also provides constant overpressure of 0.5 bar, but the volume flow can be adjusted with a frequency converter so that it can be precisely adjusted for the requirements in the existing sand trap. Using the operating principle of the claw compressor, it can be adjusted within a large range from 20 to 60 Hertz without affecting the generated overpressure.

Following installation of the new compressor, tests were performed over several weeks to achieve the optimum separation efficiency in the sand trap, ultimately concluding that the best results were achieved by operating the compressor at 35 Hertz and that this is largely independent of the wastewater pollution or the flow velocity. When the wastewater volume is high, the intervals for suctioning off the sand must simply be increased. The Mink claw compressor is installed in the acoustic enclosure of the old rotary lobe blower even though it is significantly quieter. The frequency converter is mounted on the wall and easily accessible so the speed can be changed easily with the push of a button if needed.

Furthermore, compared to the previous rotary lobe blower, the claw compressor is more energy-efficient and is equipped with an IE3 energy-saving motor, which translates to energy savings of approximately 33%. Maintenance is limited to an annual oil change, which is performed by a Busch service technician.