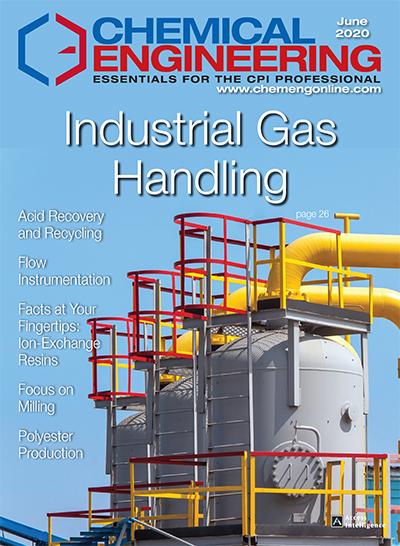 Filtering out and detoxifying hexavalent chromium from water
Chemists from the Swiss Federal Institute of Technology Lausanne (EPFL;…
BUSINESS NEWS

This pilot-scale mixer has been redesigned
The newly redesigned RS-02 high-shear pilot-scale mixer (photo) is well…
Highlights Rare Noble Gases: Production and Use of Ne, Kr and XeFacts at your Fingertips: Ion Exchange Resins in Water TreatmentRecently Published Books for the CPI: May 2020Technology Profile: Production of Orthophthalic Unsaturated PolyesterTurning Up the Heat on Valve Train Safety

Innovative strength is the most important competencies of Buss-SMS-Canzler GmbH’s (Düren, Germany; www.sms-vt.com). This spirit does not remain stuck in the past, but continues to advance and break new grounds allowing it to celebrate this great anniversary in 2019.

On April 1, 1919, Mr.Richard Samesreuther, a 38-year-old war returnee without large financial means of his own, nevertheless dares to found the Samesreuther & Co. OHG in Butzbach – as we know today with great success! 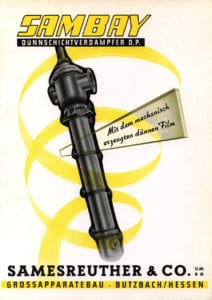 After mastering three extremely difficult decades until 1949, seven more decades in a politically more stable and peaceful period followed, during which the company changed constantly, not only in terms of its product range.

The takeover by the new majority shareholder — Müller-Schuss KG in 1964 — was followed by the integration into the new Samesreuther Müller Schuss (SMS) GmbH group of companies with its five production sites. Later, the company was taken over successively by two Swiss industrial groups: first by Luwa AG in 1972, which created Luwa-SMS GmbH, and then by Buss AG in 1983, which created Buss-SMS GmbH. This was followed in 1998 by the takeover by the American company UPE Inc. and the most recent change was the takeover by the company’s own management in 2003.

Together with the important step of the takeover of the thermal separation technology of Canzler GmbH in 2003 by the former Buss-SMS GmbH, the current company name Buss-SMS-Canzler GmbH explains itself.

Much more important, however, is the fact that the combination of the expertise and experience of the three companies Samesreuther Müller Schuss (SMS), Buss and Canzler has created a unique pool of reference plants worldwide and an equally unique team of employees, a power center for thermal separation technology.

Since its foundation in 1919, the company has achieved an impressive series of technological milestones, including patents for thin-film and short-path evaporators, development of thin-film dryer and high-viscosity processors, large-volume processors, and more, to name just a few. Buss-SMS-Canzler has continuously refined its technologies over the past 100 years in order to meet the constantly changing requirements of the market and the customers and to offer solutions by using its own potential: Improving the existing and developing optimum solutions to new requirements.

Due to its large number of industrial references and its broad technology program, as well as its range of applications, the company is a global leader in thermal separation technology and the world market leader in the thermal concentration of substance mixtures, which are difficult to handle.

“We are proud of the fact that even after 100 years of company history, our employees are always looking for the best solution with the same commitment, knowledge and experience and are never satisfied with the second best solution, even if it is sometimes a challenge to find it. Just like 100 years ago, says the company.