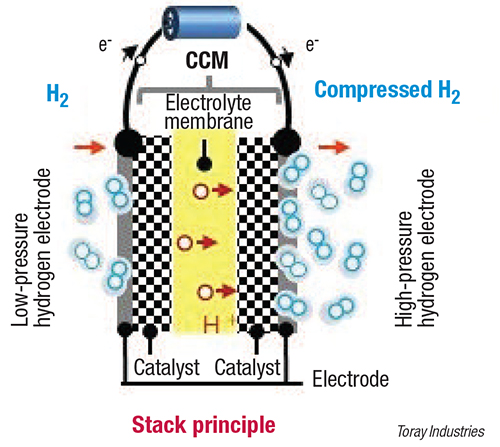 The electrochemical hydrogen pump system, including a polymer electrolyte membrane (PEM) stack (diagram), compresses H2 using renewable energy to perform the oxidation-reduction reactions. H2 is supplied to the anode side of the catalyst-coated membrane (CCM), where a Pt-alloy catalyst splits the molecule into protons. The electrons are transferred via an external circuit to a catalyst layer on the other side of the PEM, where the protons recombine as H2 on the cathode side.

Kaji Technology and Toray are targeting the commercialization of a system that produces 4.1 Nm3/h of H2 at 40 MPa pressure. Toray is in charge of developing the PEM and stack. Kaji Technology developed the combined package of electrochemical H2 pump system with the stack.

A 19.6-MPa electrochemical H2 pump system supplied by HyET Hydrogen B.V. (Arnhem, the Netherlands; www.hyethydrogen.com) was installed by Kaji Technology at the electric-power storage technology research site that the Yamanashi prefectural government runs in Komekurayama, Kofu City. Demonstration testing at the site used the pump system to compress “green hydrogen” produced by solar energy with a 25-kW PEM-type electrolyzer from Toray. That setup was the fruit of another NEDO-funded project. This was the first demonstration of a continuous PEM type electrolyzer and PEM type hydrogen pump system in Japan.

Compared to a conventional mechanical H2 compressor, the electrochemical system is more compact, vibration- and noise-free. The two companies are working to commercialize systems running at higher capacities and pressures.