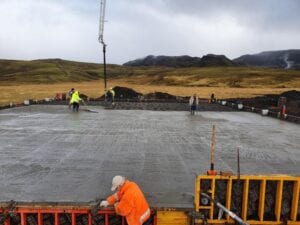 In addition to emissions reduction efforts, which prevent new CO2 from entering the atmosphere, climate scientists agree that removing historic emissions is crucial to limit global warming to 1.5°C. To restore a healthy balance of CO2 in the atmosphere, pure CO2 removal solutions are needed at large scale. By providing accessible, permanent and fully measurable CO2 removal, Orca sets high standards for the emerging CO2-removal industry.

Orca will permanently remove CO2 from the atmosphere on behalf of corporations or institutions, as well as individuals. A unique subscription-based program enables anyone to join the innovative community of nearly 3,000 pioneers from 54 countries around the world who are already leading the way to a climate-positive world.

“Breaking ground on the construction of Orca marks an exciting milestone for Climeworks and an important step in the fight against climate change. Climeworks’ new plant Orca demonstrates that scalable, pure carbon dioxide removal via direct air capture is possible. And we are excited to be a vital part in kickstarting the carbon dioxide removal industry,” says Christoph Gebald, co-CEO and co-founder of Climeworks

The rapid construction of Orca has just started: it will take six months and comprises two phases.

Due to the modular nature of the Climeworks technology it is possible to achieve short construction times, which will be a key enabler for scaling the technology in the future.

The construction of Orca comprises two phases: phase one started in October (photo) and is expected to be completed by the end of this year. It includes the infrastructure and the foundation for the new generation of Climeworks’ CO2 collectors. Phase two involves the installation of the plant and machinery in Iceland and is expected to be finalized by spring 2021.

Orca, once complete, will remove over 4,000 tons of CO2 from the atmosphere every year, making it the largest direct air capture and storage plant to date. Orca is being built close to ON Power’s Hellisheidi Geothermal Power Plant in Iceland, meaning that all the energy required to run the direct air capture process at Orca will come from purely renewable sources. Underground storage of CO2 is performed by Carbfix.