A larger-capacity, multi-stage centrifugal pump
With the introduction of a third size in the Hilge…

Corrosion is an obvious factor to consider when selecting materials of construction for process equipment. However, the chemical environment of the process is only the starting point in selecting an acceptable material. A set of other factors can complicate corrosion-resistance strategies. This one-page reference summarizes several of these areas.

The corrosive properties of a process fluid’s major constituents are usually known to process engineers. Less obvious, however, may be how the presence of impurities can cause corrosion. Here several examples:

Chloride ions. An example of a harmful impurity is the chloride ion, which, under certain conditions, is known to cause stress-corrosion-cracking (SCC) and pitting of stainless steels. This insidious form of corrosion can occur at concentrations as low as a few parts per million. The negative influence of contaminating chloride and fluoride ions on steel’s corrosion resistance is amplified at higher temperatures. Increases of 10°C can almost double the corrosion rate.

Corrosion of metals by gaseous contaminants is accelerated by heat and moisture. Rapid shifts in either temperature or humidity cause electronics or other components to fall below the dewpoint temperature, thereby allowing condensation of contaminants. In the context of electronics, relative humidity (RH) above 50% accelerates corrosion by forming conductive solutions. Microscopic pools of condensation then absorb contaminant gases, which become electrolytes in the pools, where crystal growth and electroplating occur. Above 80% RH, electronic corrosive damage will occur, regardless of the levels of contamination. Prime culprits in the corrosion of electronics include acidic gases, such as H2S, chlorine and HF, NOx and SOx; as well as caustic gases, such as NH3; and oxidizing gases, such as O3. Acidic gases are typically the most harmful. If the operation is maintained at a temperature above the dewpoint, the corrosion rate drops to almost nothing.

Microbes. Bacteria cause a type of corrosion known as microbiologically influenced corrosion (MIC), whereby the bacteria can eat through stainless steel tanks and piping. Bacteria primarily attack the retained, ferritic, metallic grains in stainless weldments, although MIC can also occur in the base metal, remote from welds. The bacteria burrow caves into the metal that, when observed with a scanning electron microscope, appear like a honeycomb structure (see Figure 1). Most commonly used metals are subject to MIC attack to varying degrees. 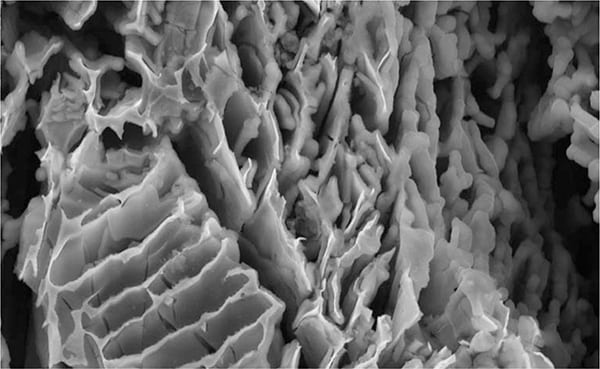 Boiler feedwater is a good example. A boiler can fail in six months if O2 is present in the boiler feedwater. The same boiler could last six decades with deoxygenated feedwater.

Flow velocity must be evaluated, particularly when considering pumps, agitators, and other equipment subjected to relatively high fluid velocities. Velocity can manifest itself in a corrosive environment as flow-accelerated corrosion (FAC). Of concern here is the fact that most published corrosion data are based on relatively stagnant corrosion conditions. Although there are a few exceptions, corrosion increases as velocity increases. An example is commercial-grade ambient-temperature sulfuric acid transport in carbon steel. One notable exception is that flowing water inhibits MIC.

In general, lower pH means more aggressive corrosion. A variation in pH of a few points could make the difference between being able to use a relatively inexpensive material and requiring a costly material of construction. For example, a lower pH environment allows SCC to occur at a lower chloride concentration.