Coatings will always be needed on the many metal surfaces in a CPI plant. Because those coatings will be exposed to harsher conditions than average due to the nature of a chemical processing environment, it is important to take corrosion protection into consideration and choose durable coatings. Among the variety of ways to counter corrosion in the CPI, one basic strategy has been, and will remain to be, the use of protective direct-to-metal (DTM) coatings.

How coatings protect against corrosion

Corrosion is a natural reaction between metal and external elements, such as oxygen and moisture. Basic oxidation can occur simply by the exposure of metal to air. However, corrosion reactions accelerate when an electrolyte-containing medium, such as saltwater, is present to facilitate electron transfer between the anode and the cathode of a corrosion cell. Corrosion also intensifies with higher temperatures or the exposure to harsh chemicals, which is why corrosion in a CPI facility can be much more severe than, for instance, a dry warehouse setting.

Coatings have long been a basic means of protecting wood and metal structures from deterioration. While most of us are familiar with house paint used to protect wood from weathering, CPI facilities chiefly consist of metal equipment and structural components in need of protection. Coatings inhibit corrosion by creating a physical barrier between the metal and corrosive elements, and in many cases, incorporate corrosion inhibitors as an extra layer of defense.

Due to the extreme corrosivity of many chemical processes, CPI facilities require more durable coatings than many indoor applications. However, this can also vary from component to component. For example, a stairway railing will not require the same level of durability required in a splash zone, an immersion tank setting or even on a floor exposed to heavy foot traffic. Characteristics such as these must be taken into consideration when choosing a protective coating.

Sacrificial metals, such as zincs, chromates and aluminum, have been commonly used to create traditional protective coatings. The relatively large particle size of these inhibitors, when considered at the microscopic level, leaves gaps that allow corrosion to get a foothold in micro-cavities and spread more easily from there. An alternative or supplementary technology to standard corrosion inhibitors for coatings are vapor corrosion inhibitors (VCIs), which typically come in the form of salts of amine carboxylates. These corrosion inhibitors have an affinity for metal surfaces, allowing the inhibitors to adsorb and form an invisible, protective molecular layer on the metals. This molecular barrier blocks the electrochemical reaction of metal with oxygen and moisture, inhibiting the flow of electrons in the normal oxidation-reduction reaction that would otherwise cause rust to form.

Because VCIs are relatively smaller and form a much more continuous layer of protection to line the micro-cavities of a metal surface, they are sometimes called “micro-corrosion inhibiting” coatings. Combined with the physical barrier and sometimes also the sacrificial metal inhibitor barrier of traditional coatings, they provide a double or even triple barrier against corrosion, as illustrated in Figure 1 [ 2]. 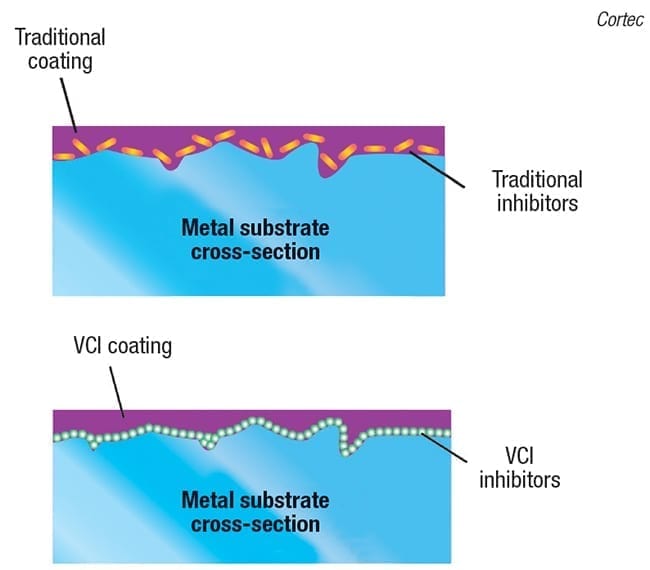 FIGURE 1. The mechanism of vapor corrosion inhibitors involves the formation of a continuous layer of protection that lines the micro-cavities on a metal surface. Cortec

VCIs have an environmental advantage in that they can replace sacrificial metals, and they have been used very effectively to boost the corrosion-inhibiting ability of water-based coatings, which typically benefit from their lower concentration of volatile organic compounds (VOCs) when compared to solvent-based coatings. Data suggest that VCIs also have a synergistic effect with other inhibitors. For instance, when VCIs were added to an acrylic water-based coating containing a non-zinc metal-complex inhibitor, the coating showed improved protection in salt fog testing. The coating blistered less and there was less corrosion on the metal surface than occurred with the coating containing the metal-complex inhibitor only [ 3].

VCIs can be used with many different types of resin systems — both water-based and solvent-based. In the harshness of a chemical processing environment, this will often require users to lean toward solvent-based coatings, but often water-based epoxy and acrylic VCI coatings find their place, as well, improving the overall environmental profile of the application and reducing exposure to VOCs — although solvent-based VCI coatings are typically also compliant with VOC-content regulations. 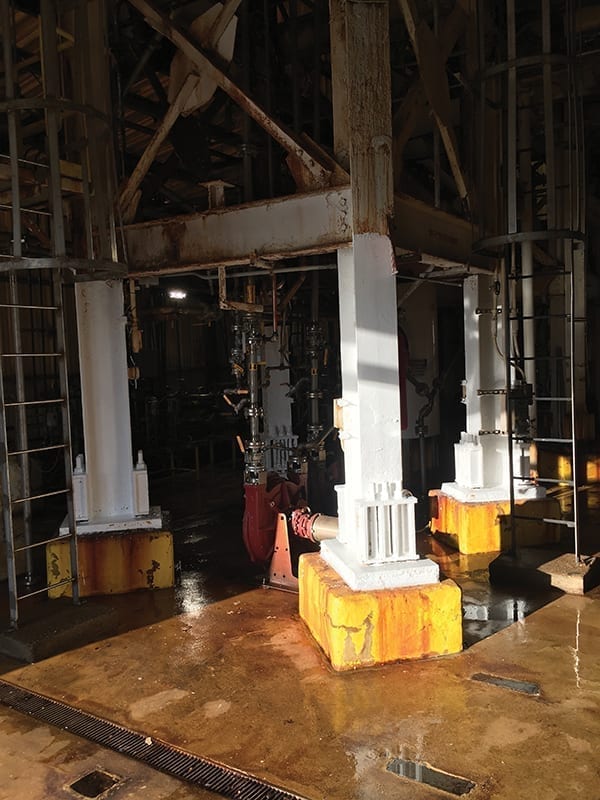 There are many basic areas to coat around a chemical plant — railings, walkways and structural steel — and an additional benefit when using VCI coatings for these areas is that they can be tinted to match the desired color-scheme — whether safety yellow, red, green or blue — to serve the purpose of both corrosion protection and aesthetics. Certainly, the main functionality is to protect the metal from rusting, but a secondary function is to improve appearance. 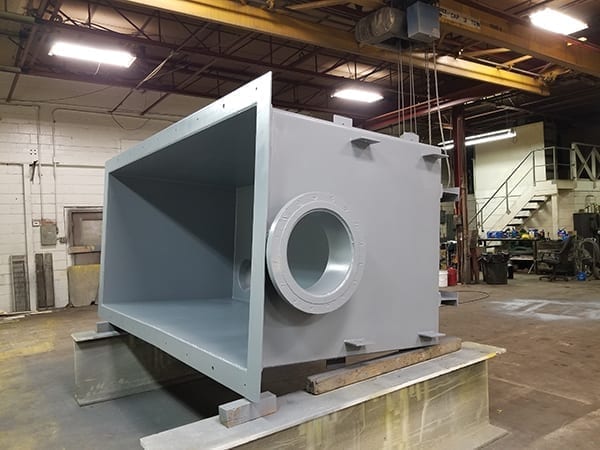 FIGURE 3. A large tank for a weir system at a chemical processing plant was coated with a VCI water-based epoxy primer and topcoat for corrosion protection. Cortec

Depending on the severity of the conditions encountered in a chemical plant, different coatings may be better suited for each application, as the coatings may need to be durable and chemically resistant against varying process media, including fumes and liquids. Often, in these situations, epoxy-based coatings (Figures 2 and 3) are chosen. 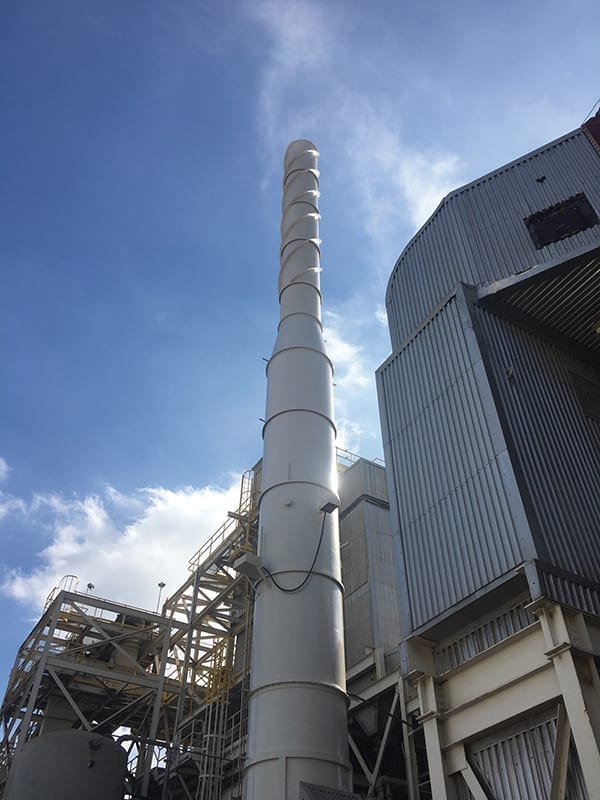 Coatings like those illustrated in Figures 2 and 3 can be applied directly to the metal as a one-coat or two-coat system. They can be top-coated with either a VCI water-based acrylic system (Figure 4) or, for higher durability, covered with a one-component VCI solvent-based moisture-cure urethane (Figure 5) or two-component VCI solvent-based urethane coating. For the more extreme conditions, such as those encountered by splash zones, floors or internals of a tank that will be filled with an acid or caustic liquid, it is recommended to simply use a basic 100% solids two-component novolac (special phenol- or formaldehyde-based polymer) epoxy coating that is chemically resistant. 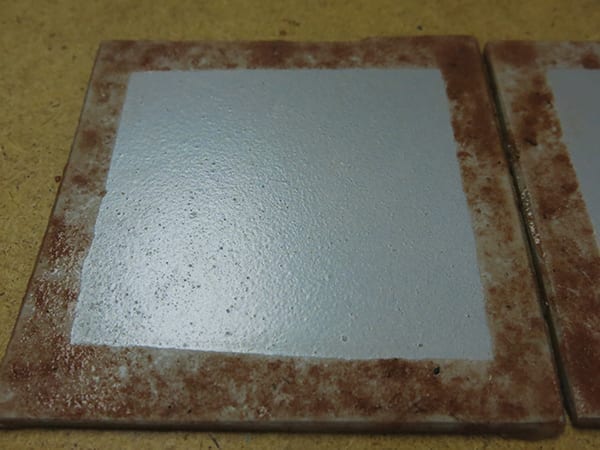 Epoxies and urethanes are among the more durable resin systems and can be fortified with micro-corrosion-inhibiting VCIs. Rust-converting primers for pre-rusted surfaces and novolac epoxies for floors or chemical splash zones are also good options for extreme surface-prep needs and harsh chemical-exposure applications, respectively. For the best performance, application crews should employ best practices to prepare a clean surface and closely follow manufacturer’s instructions for coatings application.

As important as it is to choose a proper coating, it is also important to take precautions that will help to ensure the best coating integrity. A good coating applied haphazardly to a poorly prepared surface will compromise the durability of the coating much earlier than necessary. Proper surface preparation is vital to creating a coatings system that will last. Other important factors are proper mixing, thickness and weather conditions. Coatings users must ensure that they have the mix ratios correct and that they are applied at the proper thicknesses. Weather conditions also play a role in impacting coating application. For instance, in cold weather, water-based coatings are not going to experience optimal application and curing. Following the manufacturer’s recommendations will help to guide users in planning how and when to best apply certain coatings [ 5].

An important and convenient aspect of many VCI coatings is that they can be applied directly to the metal. Some VCI coatings are primers, some are topcoats and some can flexibly serve in either category. Using good primers is an important part of a successful coatings system, because it helps the coatings bond better to the metal surface. While it may not always be practical due to time and budget considerations, the ideal coatings system will include two coats of a primer with a heavy-duty topcoat to finish it. Two-component primers and topcoats are even better, although they require extra mixing to allow the advantages of cross-linking to occur. In these cases, maintenance engineers will need to weigh time, convenience and cost against desired performance.

Surfaces must be free of rust and contaminants if coatings users want the coating to last as long as possible. For surfaces that have already rusted, this could involve chemical rust removal or some type of blasting. Sandblasting is common, but not always convenient, and sometimes is not even allowed or feasible in certain environments. A convenient alternative is to apply a water-based rust-converting primer that uses polyvinylidene dichloride (PVDC) resins and a chelating agent to turn the rust into a passive layer that seals it off and protects it from further rusting. For situations where either water-based or solvent-based topcoats may be applied, it is ideal to choose a rust-converting primer that is compatible with either coatings system and exhibits adhesion behavior according to ASTM Class 5B. Rust-converting primer is also a good option for structural repairs where concrete has delaminated to reveal rusty rebar. Such a coating can be applied to passivate the rebar before continuing the concrete repair process.

Following this guidance will help maintenance engineers to tackle the challenging corrosion scenarios encountered in CPI facilities and get the best performance possible out of their protective coatings. ■

Ana Juraga (Email: ana.juraga@ecocortec.hr) is corporate communications manager at Cortec Corp. She has been a content writer at Cortec for 10 years. Besides dealing with media relations, she collaborates with Cortec’s engineers and chemists in creating informative technical content. She is passionate about educating the engineering community about green corrosion-inhibiting technologies and the numerous advances in this field.

Julie Holmquist (Email: jholmquist@cortecvci.com) has been a content writer at Cortec Corp. for more than four years. She specializes in writing about corrosion-inhibiting technology for concrete, electronics, manufacturing, oil and gas, and many other industries. Her articles have been published in dozens of industry magazines.

Markus Bieber (Email: mbieber@cortecvci.com) is currently the vice president of integrated solutions at Cortec Corp. He has spent more than 20 years in product and sales management in the coatings industry working for Cortec Corp., The Sherwin Williams Co. and Hydrite Chemical. Bieber has authored numerous papers for NACE International and The Society for Protective Coatings (SSPC) focused on coating technologies, as well as VCI corrosion-inhibitor technologies.

Related Content
Building a Sustainable Coatings Infrastructure
Recent advancements in coatings technologies are driving the industry toward more sustainable performance Globally, there has been an increase in…
Axalta breaks ground for waterborne coatings plant in Shanghai
Axalta Coating Systems Ltd. (Philadelphia, Pa.) broke ground on the newest phase of its Jiading plant in Shanghai, which represents…
Axalta supplies antimicrobial coatings for temporary COVID-19 hospital in Chicago
Axalta Coating Systems Ltd. (Philadelphia, Pa.; www.axaltacs.com) announced that it will supply E&R Powder Coating with more than 7,000 pounds…
Monitoring of Water and Steam Chemistry for Steam Generators
Online monitoring of steam and water chemistry in a steam system is important for safe and reliable operation of steam…
Thin, organo-ceramic coating improves corrosion and fouling resistance of metal components
A chemical vapor deposition (CVD) process that bonds a silicon-oxide film to metal surfaces of any shape is being scaled…