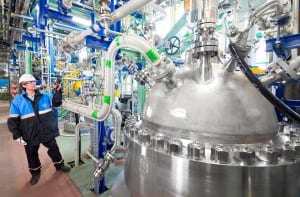 Covestro AG Leverkusen, Germany; www.covestro.com) is now, for the first time, using CO2 to produce plastics on an industrial scale. Today, the company opened a production plant for an innovative foam component made with 20% CO2 at its Dormagen site near Cologne, Germany. The new process saves a proportional amount of the traditional oil-based raw material, thus making a contribution to sustainability that Covestro believes offers considerable potential.

“We have to change the way we look at CO2, and we will. Using it as an alternative source of raw materials is a solution to some of the biggest challenges of our time – finding a replacement for finite fossil resources such as oil and gas and closing material cycles. Thanks to our innovative process and the launch of our production operations in Dormagen, we see ourselves as a pioneer in this area — true to our vision ‘To make the world a brighter place’,” said Covestro CEO Patrick Thomas at the opening ceremony, which was attended by more than 150 guests from business, science and politics.

“This method of using carbon dioxide as a raw material is an important step as we move toward a sustainable future. The German Federal government is promoting the use of CO2 as a raw material in order to expand the chemical industry’s raw materials basis and open new avenues to sustainability,” emphasized Thomas Rachel, Parliamentary State Secretary from the German Federal Ministry of Education and Research. It supported Covestro’s technology financially in the research and development phase.

Professor Ernst Schmachtenberg, Rector of RWTH Aachen University, added: “Making efficient use of the carbon dioxide molecule, which is normally slow to react, is a real scientific and technical challenge. We have made a breakthrough by combining application-centric basic research with research-based industrial practices.”

Covestro scientists worked hand-in-hand with experts from the CAT Catalytic Center in Aachen – a research institute operated jointly with RWTH – to find the right catalyst that would make the chemical reaction with CO2 possible.

In Dormagen, Covestro is now using carbon from CO2 to manufacture a new type of polyol. These are core building blocks for polyurethane foam — a versatile material that is used in many industries around the world and that we encounter throughout our daily lives. The carbon dioxide is chemically bound into the material.

The company has invested some EUR 15 million in the new plant, which has an annual production capacity of 5,000 metric tons. The CO2 used is a waste product from a neighboring chemical company.

The new CO2-based polyol has been engineered initially for flexible polyurethane foam intended for use in mattresses and upholstered furniture. In terms of quality, the foam achieves at least the same high standards as conventional material produced using only petrochemical raw materials, that is crude oil.

By eliminating the use of crude oil and saving the energy otherwise used to process that oil, the method is more environmentally friendly than conventional production processes. Thanks to the catalyst and the considerable energy contained in the remaining content of petrochemical raw materials, no additional energy needs to be expended to make the low-reactivity CO2 react.

If the new CO2-based products are received as warmly as is hoped, Covestro can envisage significant production expansion. In addition to flexible foam, the company is also working on manufacturing many other plastics with carbon dioxide. Its vision is to one day largely dispense with crude oil in plastics production.

Related Content
Sumitomo Chemical to expand production capacity for liquid crystal polymer
Sumitomo Chemical Co. (Tokyo, Japan) has decided to build additional production lines for its liquid crystal polymer (LCP) SUMIKASUPER, which…
SOCAR and Axens sign agreements related to refinery modernization and reconstruction
SOCAR HQ held a ceremony to sign licensing and design agreements for the Fluid Catalytic Cracking (FCC) unit between the…
Wood selected by Green Lithium to support the U.K.’s first commercial lithium refinery
Wood plc (Aberdeen, Scotland) has signed an agreement with mineral processing company Green Lithium, to be its Owner’s Engineer to…
KBR awarded engineering contract for Biojet’s renewable energy project in Norway
KBR, Inc. (Houston)announced that it has been awarded an engineering contract by Biojet AS for a concept study for its…
Toray commercializes nylon grade with 100% bio-based synthetic polymers
Toray Industries, Inc. (Tokyo, Japan) announced that it has developed a nylon 510 (N510) fiber that incorporates 100% biobased synthetic…