When designing a regenerative thermal oxidizer, engineers should not overlook the high-cycle valves that control process air and help maintain efficiency

Regenerative thermal oxidizers (RTOs) are regularly utilized in the chemical process industries (CPI) to collect and control air-pollution emissions generated from industrial manufacturing operations. RTOs are specially designed for controlling emissions of volatile organic compounds (VOCs) from a broad spectrum of industries. An RTO uses ceramic media as the heat-exchanger medium, providing high heat recoveries. For the last decade, a great deal of emphasis has been placed on the selection of the ceramic media and burners for RTOs, while some of the most critical components of RTO operation — high-cycle valves — have been overlooked.

The purpose of high-cycle valves in an RTO is to provide tight shutoff of the process air to maintain destruction and removal efficiency (DRE) and proper heat-exchanger operation for thermal energy recovery. High-cycle valves serve to regulate the flow of air and to isolate ducting and equipment for maintenance without interrupting other connected units. Without this valve, the regenerative process is unattainable.

High-cycle valve designs should consider the maximum system pressure, temperature changes and stresses imposed by the connecting ducting so as to prevent distortion and misalignment of the sealing surfaces. The sealing surfaces should be of such material and design that the valve will supply a tight seal over a reasonable service period. Proper valve design is critical for high VOC destruction efficiency over a long equipment life. Cycling more than 200,000 times per year, RTO high-cycle valves must operate reliably and must seal to less than 0.1% leakage at full system pressure.

Generally, two kinds of valves are used in RTOs. High-cycle valves are connected directly to the RTO’s heat-exchanger canisters, directing the flow of process air into and out of the canisters, which need to open and close every few minutes (typically 1 to 3 minutes) on a continuous basis. Most other valves associated with RTOs are called low-cycle valves due to their lower cycling frequency. Examples of low-cycle valves include isolation and diverter valves.

This article focuses exclusively on high-cycle valves, which are critical to the overall performance of an RTO — namely to achieving high destruction efficiencies. Figure 1 depicts a typical two-canister oxidizer with high-cycle horizontal poppet valves. 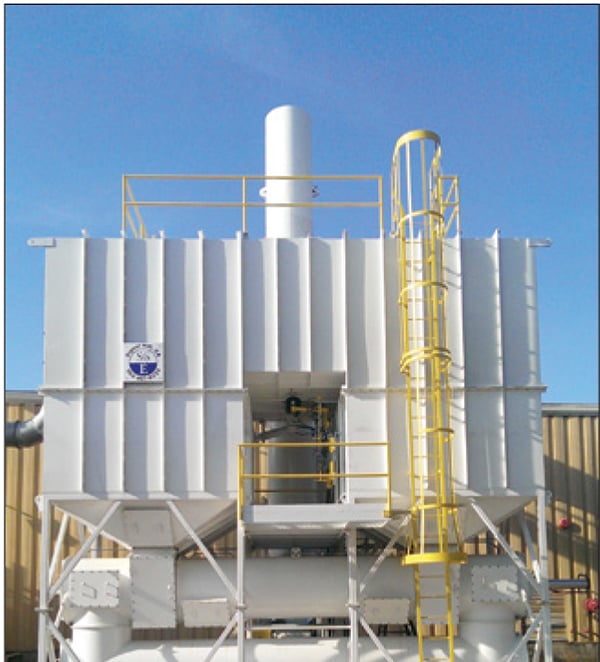 High-cycle butterfly valves (Figure 2) have been used in RTOs for more than 40 years. Consisting of a heavy-gauge flat plate inserted into a gas stream, the high-cycle valve plate is rotated by means of a motor (actuator) and linkage to control the gas-stream flow. When the valve is in the fully open position, the flat plate is aligned with the direction of gas flow and, therefore, provides very little flow restriction. 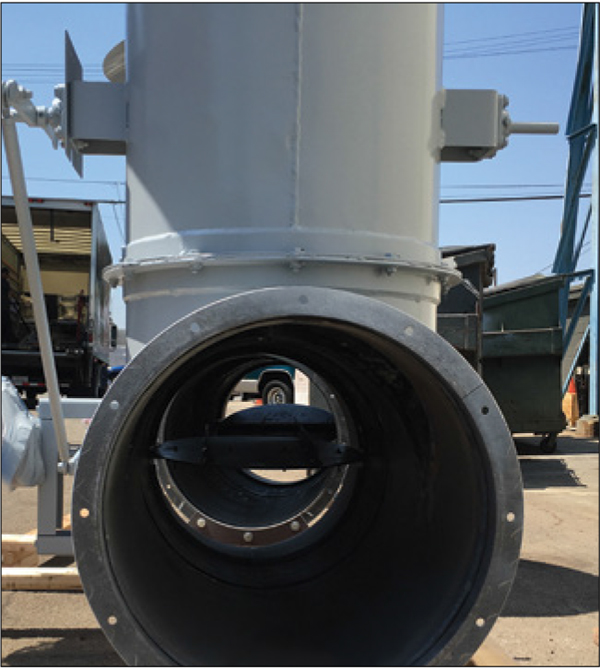 Butterfly valves occupy less space than any other valve style and have broad versatility due to the virtue of their design. They are relatively tight-sealing when proper torque is applied. They offer a simple and reliable means of gas control for both modulating and on-off applications.

To actuate (for opening or closing), butterfly valves employ a center-mounted rotating disc (or discs that typically rotate 90 deg.) The solid rotating disc, which is generally round, must resist thermal and mechanical deformations. The type and size of the valve dictates the torque requirements and, by extension, the actuation requirements. For example, beyond a certain torque, pneumatic actuators become less desirable than hydraulic dampers due to their size.

The single-blade valve is the most common type. It consists of a single solid disc (or blade) that seats against a metal or a compressible-bulb (ceramic) seal.

The double-blade valve is used when zero leakage is required, usually in applications where very high destruction efficiencies are desired. Double-bladed dampers also are supplied with either a metal or a ceramic seat.

Throughout the U.S. and in Europe, poppet valves have been used for over 25 years in two- and multi-canister RTOs. They consist of a flat circular plate that is raised or lowered typically by an electrical or pneumatic actuator. When the flat plate is in the closed position, it provides a gas seal by pressing against a raised circular seat. Gas attempting to pass through the cylinder is blocked. When the valve disk moves laterally, there are 12 to 24 in. between its open and closed position. Note that poppet valves are used for on-off control only — they are not appropriate for modulating applications (Figure 3). 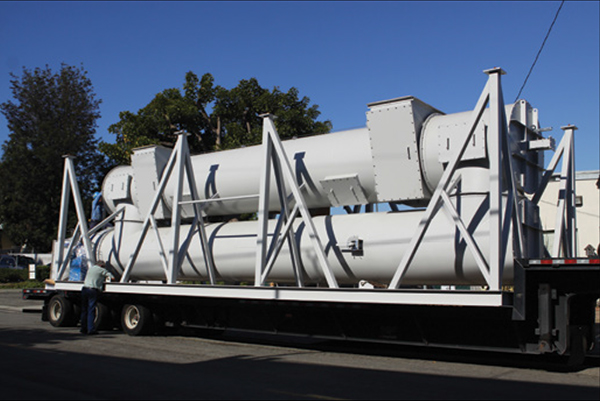 Poppet valves were initially developed for service in fabric filter systems or baghouses, and later successfully applied to RTOs. Fabric filter systems require two-way service with poppets either open or closed. System-outlet poppets are single-disc, low-leak models. System bypass poppets are leak-free, and employ a double blade and seat with seal air. These valves range from 20 to 60 in. in diameter for industrial baghouses and 48 to over 96 in. in diameter for power-generation baghouses.

Poppets for RTO service are more complex in that they seal multiple gas paths while diverting gas in different directions. RTO systems designed with two-way poppets should have one inlet and one outlet damper, providing fail-safe conditions during power outages and upset operating conditions. RTO poppet valves of this type are driven pneumatically or electrically for high-cycle service and low-leakage isolation. Pneumatics or electric drive systems supply the most reliable type of drive movement for service where 200,000 cycles per year are expected. Poppets of this type operate best when oriented vertically. They are also available with zero-leak blades and seats.

The single-canister rotary valve design eliminates the need for separate inlet, outlet and purge valves by replacing them with a single large valve. Rotary valve designs have been applied to RTOs for over 20 years. The sequence of the multiple-valve bed function as an inlet, outlet or purge is achieved by the rotation of this single valve. This valve is located below the heat recovery chambers and is either electrically or hydraulically driven. The rotation of the valve, or the flow distributor, continuously controls the airflow from the inlet plenum to one-half of the heat exchange media through the combustion retention chamber, through the other half of the heat exchange media, and then out through the outlet plenum.

The cylindrical canister holds 12 pie-shaped heat-recovery chambers. The air is cycled through six inlet chambers for preheating and through six outlet chambers for reheating the heat exchanger bed before exiting. Before chambers switch from inlet to outlet flow, they are purged of any residual unoxidized gas. Between each set of heat-recovery chambers, there are two additional chambers. One of these chambers is closed off while the second is used to purge. This purging ensures minimal VOC spikes and maximizes destruction efficiency.

The single valve moves at several minutes per rotation and ensures a smooth transition from inlet-to-purge to outlet-to-purge. This reduces upstream pressure fluctuations, which are more typical with traditional individual-canister RTO designs. The single valve, in some instances, depending on the type of traditional valve-drive system, requires less maintenance compared to the multiple-valve RTO system.

However, a single-canister rotary valve utilizes a machined metal-to-metal surface (sealed air-floating rings are used to minimize metal-to-metal contact) to achieve tight sealing. This makes it more susceptible to wear and tear. This seating arrangement also makes the single-canister RTOs more susceptible to particulate contamination, resulting in lost performance over time due to inorganic particulate wearing on the machined metal-to-metal surfaces. Other problems, such as shaft bushing malfunction and metal deformation due to high temperatures hitting the valve, have also been reported.

The high-cycle poppet and single-canister rotary-valve system is made up of many moving parts. All of these reciprocating parts must be driven simultaneously during the valve shaft’s 0.5- to 1.0-s linear seat-to-seat sudden start/stop valve movement. A simple wear-based failure of even one of these many pneumatic electro-mechanically driven parts, such as a pneumatic cylinder seal failure or pneumatic component temperature freeze, can cause the entire system to malfunction. At worst, the entire RTO system goes down, or at a minimum, poppet seat leakage reduces VOC destruction beyond the point of destruction compliance during its 200,000 valve cycles per year.

Conversely, another valve type — high-cycle flow-reversal indexing valves — can offer zero leakage in an assembly that has only one moving part. Each 90-deg index rotation of the shaft-interconnected flow diverter assembly reverses flow through the valve and interconnected RTO system. Simply put, each rotational valve movement (typically less than 0.5 s) reverses flow through the RTO.

Indexing valve designs feature no VOC leakage seals and no stopping contact seats. Rather, they are sealed using high-pressure air, which is supplied by an integral compressor blower, whose clean air separates the inlet and exhaust sides of the valve (Figure 4). This valve requires no duct manifolds, as the valve is equipped with one duct-mounting flange on each of its four ports — a valve duct connection to the inlet port from the process; an exhaust port duct to the stack; a port duct to chamber 1; and a port duct to chamber 2. 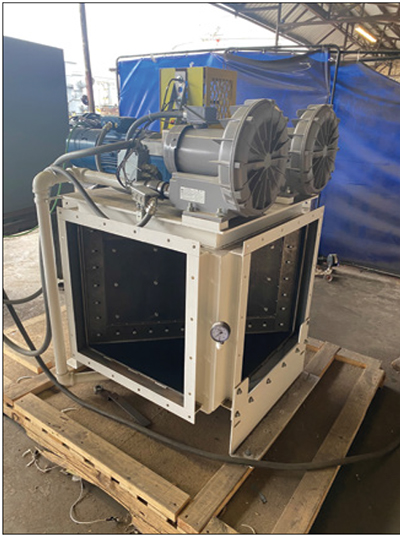 Indexing rotation is supplied by a single, intermittently operated electric-motor drive system that uses electrical power for 0.5 s per movement. It is preprogrammed for same-direction 90-deg indexing of the diverter assembly on contact closure command, which ensures that it always stops at its same predestinated position each time, even after a utility power failure. Electrically, all that is required by the end user is a momentary contact closure to initiate movement. If so desired, as an option, it can also be same-direction rotated using a single pneumatic cylinder.