A scaled-up version of an electrochemical cell with boron-doped diamond electrodes has been introduced, and the system treats wastewaters containing difficult-to-oxidize dissolved pollutants. Known as Diamox, the electrochemical oxidation cell was developed by Element Six (www.e6.com), a designer and manufacturer of synthetic diamond materials and products. The unit mineralizes the dissolved contaminants in the water and, via oxidation by electrochemically generated hydroxyl radicals, releases them as CO2. The company’s next-generation version increases the oxidation capacity by five times compared to its original device, making it more suitable for industrially relevant scales — up to 2 kg of chemical oxygen demand (COD) per hour.

Using a microwave plasma-enhanced chemical vapor deposition (CVD) process (diagram), the company synthesizes its solid, free-standing bulk diamond materials by manipulating conditions at the substrate surface such that carbon forms diamond preferentially over graphite. The CVD process allows Element Six to control the purity and introduce boron atoms to the diamond as dopants. “The addition of boron in a ratio of about 1 atom of boron per 500 atoms of diamond allows the material to become a metal-like conductor,” explains Tim Mollart, applications engineer at Element Six. This results in an electrode that can perform electrolysis, but still retain the properties of diamond, including chemical inertness and erosion resistance, Mollart continues. 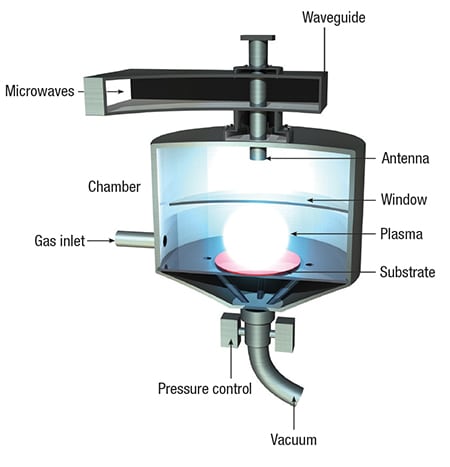 The inertness of the diamond surface is critical to the material’s operation in wastewater treatment. The current passing through the electrode generates hydroxyl radicals from water at the electrode surface, and since the radicals do not react with the inert diamond, they exist long enough to oxidize dissolved pollutant molecules in wastewater.