Facts at your Fingertips: Distillation Trays and Packing

Industrial distillation columns use either trays or packing to promote vapor-liquid contact in separating the components of liquid mixtures to the desired purity. Approximately one half of columns are equipped with trays globally, and the other half contain packings. This one-page reference reviews the differences between the two and the process situations that lend themselves to one or the other.

As a liquid mixture is heated in an industrial distillation column, the vapor generated is more concentrated in the lower-boiling (more volatile) material, while the liquid is more concentrated in the higher-boiling material. By harnessing this principle, distillation columns can separate components of mixtures. Stacks of metal trays, oriented horizontally across the column’s interior, are designed to hold up liquid while the rising vapor flows upward. The trays have openings to allow vapor to flow upward through the column, as well as conduits (downcomers) to allow condensed liquid to flow downward (Figure). The tray is designed to promote intimate contact between the upward-moving vapor and downward-moving liquid. Each tray effects a portion of the separation before the vapor and liquid move to the next tray in the column until the desired concentrations (purities) are reached. Common types of trays include bubble-cap trays, valve trays, and sieve trays. 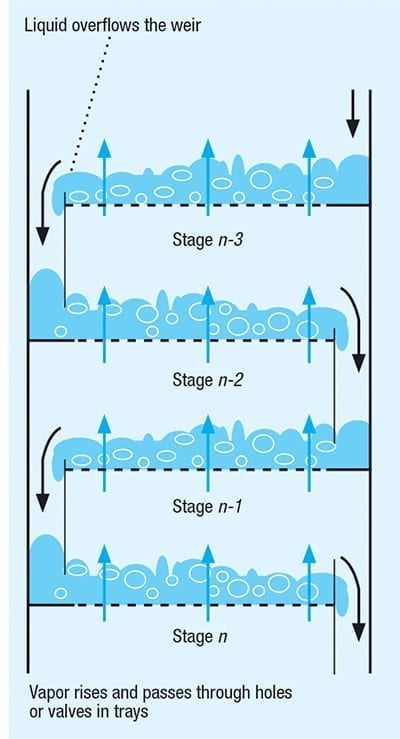 Rather than a stack of discrete trays providing vapor-liquid contact, distillation columns facilitate liquid-vapor contact by filling the interior of the column with packing materials designed to provide a large surface area per unit volume. As the liquid phase flows through the tower, the vapor and the liquid are in continuous contact on the surfaces of the metal, ceramic or plastic packing. Packed towers are generally in one of two forms: random packing and structured packing. Random packing consists of small units of high-surface area shapes that are dumped into a column and allowed to settle. Structured packing is made from corrugated sheets of perforated metal, plastics or wire gauze, and is fixed in place. Structured packing is designed with high surface-area-to-volume ratios, and to maximize liquid spreading. At the same time, they try to maintain low resistance to flow. Both random-packed towers and structured-packed towers require liquid distributors at the top of the column and packing support plates at the bottom of the column.

Trayed columns and packed columns have key advantages and disadvantages, including the following:

Pressure drop. When compared to trays, the biggest advantage associated with packings is lower pressure drops. This is particularly true with columns that are operating at pressures below atmospheric. Generally, the pressure drop across a bed of structured packing is about one-sixth of that across a stack of trays having the same total height.

High pressure. There are situations where packing is less applicable, such as high-pressure distillation columns, where pure products are being targeted. Trays perform better in those cases, and much more predictably, in such columns where the volumetric liquid-to-vapor ratios are high.

Revamps. Over time, vendor companies developing new tray and packing geometries have improved the performance of these products. New generations of trays, random packings and structured packings have made it possible, at times, to substantially improve column performances with relatively easy column revamps. When trays replace packings, it is usually because the packing performance has been disappointing. When packing replaces trays, it is usually in pursuit of reduced pressure drops.