At brownfield operating sites, energy-efficiency gains can be realized by modernizing power-generation equipment. Ideally, such projects can take place without fully shutting off power or halting plant operations

Over the last two years, virtually every major chemical producer across the globe has established targets for carbon-emissions reductions, with several companies making formal commitments to be ‘net-zero’ by 2050. However, achieving this feat will be no easy task. Power generation and heat production are typically among the largest sources of emissions for facilities that do not utilize grid electricity. This is particularly the case for sites with power or cogeneration plants commissioned decades ago.

With pressure on the companies that operate these facilities to become more sustainable, modernizing power plants via brownfield engine-exchange projects (such as replacing old equipment) has become an attractive pathway for decarbonization. 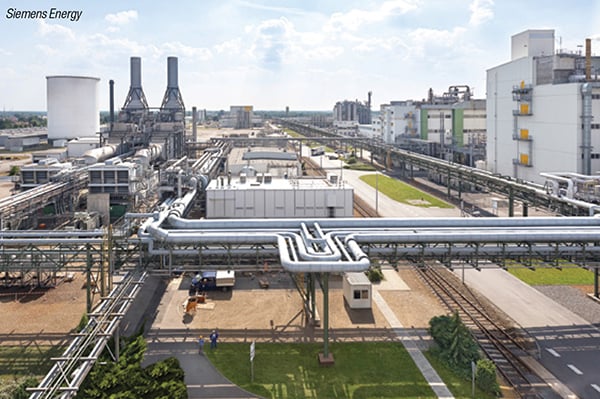 FIGURE 1. BASF modernized the power plant at its production site in Schwarzheide, Germany, which is now notably more efficient

In recent years, Siemens Energy AG (Munich, Germany; www.siemens-energy.com) has been engaged by several of its industrial customers to perform brownfield exchanges of critical machinery, including gas and steam turbines and generators. One notable project began in 2019 when the company entered into an agreement with the world’s largest chemical producer, BASF SE (Ludwigshafen, Germany; www.basf.com), to modernize a combined-cycle power plant at the Schwarzheide production site in eastern Germany (Figure 1).

The project concluded earlier this year. Among the many positive outcomes for BASF were a 4% increase in the overall efficiency of the power plant and a 16% reduction in greenhouse gas (GHG) emissions.

Built in 1935, the Schwarzheide site has a long and storied history. BASF has retained ownership over the site since 1990, and aims for it to be one of the company’s first locations to achieve carbon neutrality.

A broad range of products are produced at Schwarzheide, including performance chemicals, fungicides, foams, polyurethanes, engineered plastics, coatings and more. In the coming months, BASF also expects to start up a prodeuction facility dedicated to sustainable battery-cathode materials.

The increased power demand that will be required at the site when the new facility is operational was one of the primary motivations behind the brownfield engine-exchange project.

Since 1994, power, process steam and heat demands for the production site have been met with a gas-fired combined-cycle power plant. Although the plant had generally performed well, BASF knew that an upgrade was needed to meet its ambitious sustainability targets.

To this end, the goal of the modernization project was to reduce overall emissions from the power plant and enable BASF to expand its onsite production capacities sustainably. Another objective was to provide the basis for integrating renewable energies in the near-term future.

In addition to realizing ecologically efficient power-plant technology at the site, the Schwarzheide team also wants the site to become more flexible, so they are balancing out the fluctuation of renewables they plan to integrate within their production processes in the coming years.

Siemens Energy’s modernization approach involved upgrading the power-generation equipment on one of the main power lines at the site by swapping out the old gas turbine from another original equipment manufacturer (OEM) with a more fuel-efficient unit — in this case, a new SGT-800 industrial gas turbine. The second power line at the plant remained operational so that chemical production could continue uninterrupted. As many project personnel described, the task was akin to performing “open-heart surgery.”

Replacing the existing gas turbine with the SGT-800 would significantly reduce the fuel consumption and CO2 emissions of the combined-cycle plant. However, as is often the nature of brownfield projects, the engine exchange at Schwarzheide presented many unique challenges for the project team, including working in close quarters. Any vibration during assembly or installation of the SGT-800 turbine could cause a shutdown of the second running gas turbine, thus disrupting energy supply to the plant and impacting production.

A critical feature of the SGT-800 engine is its dry low-emissions (DLE) combustion system, which is capable of burning a wide range of liquid and gas fuels, including those with a high content of inert gases and heavy hydrocarbons, including diesel. The engine can also handle fuels that contain up to 75% hydrogen by volume. The combustor and burner designs offer single-digit CO emission levels and emissions from oxides of nitrogen (NOx) ranging from 9–15 parts per million (ppm) over a wide range of operating parameters.

Swapping out the old gas turbine with the SGT-800 enabled BASF to increase the power line’s output by more than 15% — from 40 MW to 52 MW. The existing generator in the plant was also refurbished. This consisted of revamping the direction of rotation, optimizing the flow-side inlet channels in the rotor winding and modifying the base frame.

Together, the combination of the new gas turbine and refurbished generator, along with several other facility upgrades, resulted in a 4% increase in the efficiency of the power plant, translating into lower fuel costs per kilowatt-hour and a reduction in total GHG emissions of around 16%. 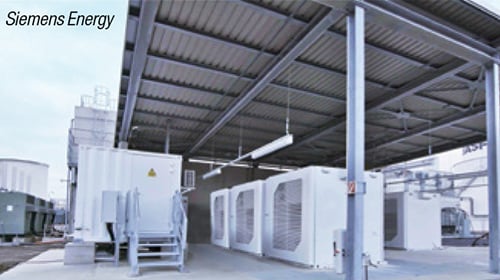 Additionally, a battery energy-storage system was installed for emergency power supply (Figure 2). The battery enables the black start of the power plant without relying on external power sources. At most power plants, this is typically done using diesel generators. The battery system has the power and capacity to provide three sequential black starts of the newly installed SGT-800 gas turbine without recharging.

Siemens Energy is also supporting proactive risk management for the gas turbine, including remote monitoring and degradation forecasting. In addition, where necessary, augmented reality (AR) tools will be utilized so that equipment experts can remotely guide BASF maintenance staff in isolating and troubleshooting potential problems. In this way, plant personnel will have critical information available remotely without Siemens Energy personnel having to be physically onsite.

Even with a new gas turbine, refurbished generator and modifications made to the power plant at the Schwarzheide production site, the brownfield exchange was completed with a much lower capital investment than would have been required if BASF had elected for a complete power plant rebuild (greenfield project).

The close cooperation between Siemens Energy and BASF played a critical role in smooth execution. Each company was very transparent throughout the process and duly included each other to help manage risks. Because of this, the project was a success, and should serve as a model in what is possible when there is a clear vision for decarbonization and extensive co-creation between a chemical plant operator and a power plant OEM. 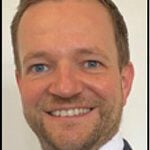 Bernd Kuenstler (Email: bernd.kuenstler@siemens-energy.com) joined Siemens in 2009 as part of Siemens Turbomachinery Equipment GmbH in Frankenthal, Germany. In 2010, he joined the regional sales department of the Industrial Application Service and since then has worked closely with many customers in the greater Rhineland-Palatinate, Saarland and Hesse regions from Mannheim and Mainz. In 2016, he became part of the Siemens Account Management team for BASF and assumed the key account manager role for BASF when Siemens Energy was founded in 2020.