A megadrought in the U.S. Southwest has triggered emergency measures to be taken, as both water and hydroelectric power supplies to millions of people are threatened. The water levels in the two largest human-made reservoirs in the U.S., Lake Mead and Lake Powell, have been receding for years and have now reached historic lows. 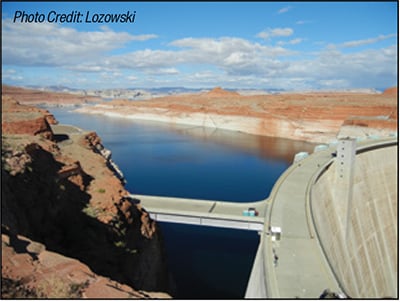 “Bathtub rings” around the reservoir show where water levels have receded. This photo of Lake Powell and the Glen Canyon Dam was taken in 2014, at which time there was already concern about the water levels

When I visited Lake Powell and Glen Canyon Dam in 2014, the “bathtub rings” around the reservoir allowed for spectacular views of the rock formations (photo). However, the rings were a foreboding sign of the receding water levels, and at that time, there was already concern about the future of the water supply. Lake Powell’s water level, which when full is at an elevation of about 3,700 ft, is now at around 3,522 ft — less than 25% of capacity. An elevation of at least 3,490 ft is needed for Glen Canyon Dam to operate and supply power to its over 5 million customers [ 1]. Just last month, for the first time, the federal government announced a delay in the release of water from the Lake Powell reservoir to downstream Lake Mead in order to keep Glen Canyon Dam in operation.

And in Lake Mead, which supplies water to millions of people, the extremely low water level has exposed a water intake valve that has been in operation since 1971 and can no longer be used now. These severe drought conditions have driven officials to enact numerous conservation measures, including limiting water supplies to the Colorado River Basin and outlawing “nonfunctional” grass in areas of Nevada.

Water scarcity is a global concern and warnings about severe water shortages are alarming [2]. The current water crisis in the Southwest emphasizes the need to keep water conservation a top priority. There are numerous ways in which chemical engineers can contribute to sustainable water practices, such as increasing water efficiency in agricultural and industrial operations, and further developing water re-use and desalination technologies. Further suggestions are outlined in the report “New Directions for Chemical Engineering” by the National Academies of Sciences, Engineering and Medicine (Washington, D.C.; www.nationalacademies.org).

New advances in membrane technologies are addressing challenging conditions to meet ZLD goals, and fouling-resistant membranes are being used in industrial water re-use applications. More on these advances are outlined in our Newsfront, “New Membranes Support Sustainability Trends,” on pp. 12–17. ■