An electrotrophic system that treats swine sewage in one step

Researchers from the Biological Systems Unit at the Okinawa Institute of Science and Technology Graduate University (OIST; Japan; www.oist.jp) have developed a bioelectrochemical system that uses bacterial communities to break down organic material from raw wastewater, and removes both nitrates and phosphates from aerated wastewater. A proof-of-concept have been demonstrated in both the laboratory and on a local swine farm in Okinawa, Japan.

Across Okinawa, large amounts of wastewater are produced by pig farms. The traditional aeration system currently utilized by farmers mainly treats organic matter in the wastewater and also converts the ammonium present to nitrate, but it does not treat the nitrate further. In Japan, the nitrate discharge limit for the livestock industry will soon be lowered to one fifth of the current 500-mg/L level — more than 35% of farms in Okinawa are likely to exceed this impending change, according to OIST. 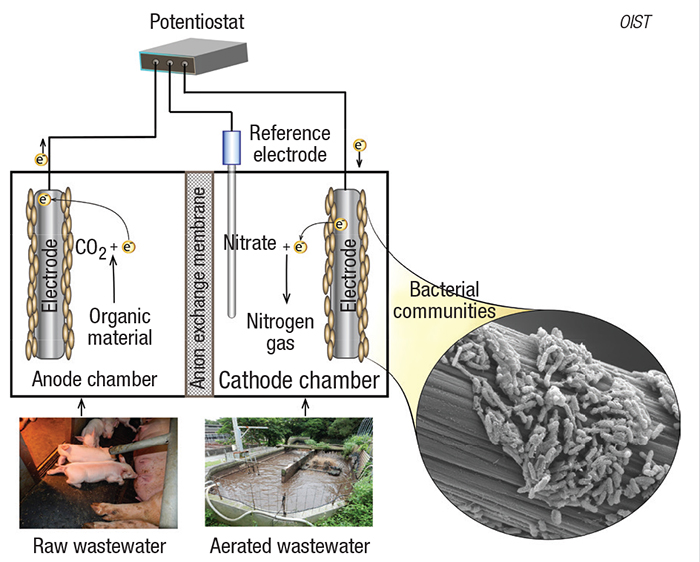 “Our new system uses two different chambers,” explains Anna Prokhorova, lead author of an article recently published in Bioresource Technology. “In one chamber, full strength swine wastewater is treated for the removal of odor, pathogens and organic matter, whereas in the other chamber, excess nitrate and phosphate is removed from wastewater that has already been treated through the traditional aeration system. To the best of our knowledge, this is the first system to successfully treat two different types of wastewater at the same time,” she says.