Making Cybersecurity Training a Priority
All critical infrastructure segments are at risk for cyberattacks, but…

Reduce the humidity and make some electricity on the side
Researchers at the Dept. of Materials Science and Engineering, National…
BUSINESS NEWS

Hydrogen derived from water and renewable electricity, rather than from natural gas, could offer abundant energy without carbon dioxide emissions if water-splitting processes could be scaled up effectively. But the best catalyst for the reaction — platinum — is scarce and expensive, which prevents widespread scaleup. New findings from researchers at Brown University (Providence, R.I.; www.brown.edu) suggest a new approach to designing catalysts that could avoid the dependence on platinum.

Current orthodoxy holds that Pt acts as an effective catalyst because the free energy of adsorption of hydrogen onto the catalyst surface is close to zero. The result being that H atoms are not bound too weakly (so that they don’t initiate a reaction), but also not bound too strongly (so that they fail to complete the reaction and form H2).

However, other materials with binding energies similar to platinum have catalyst activities that are orders of magnitude lower than those of Pt, suggesting that factors other than binding energy are at play. The Brown research team, led by engineering professor Andrew Peterson, created specialized computer simulations that suggested another mechanism for the metal’s catalytic activity.

At high reaction rates, the hydrogen atoms with zero free energy don’t actually participate in the water-splitting reaction. Those that do sit atop the Pt atoms, rather than within the lattice of the catalyst material and are bound more weakly to the catalyst surface (diagram). 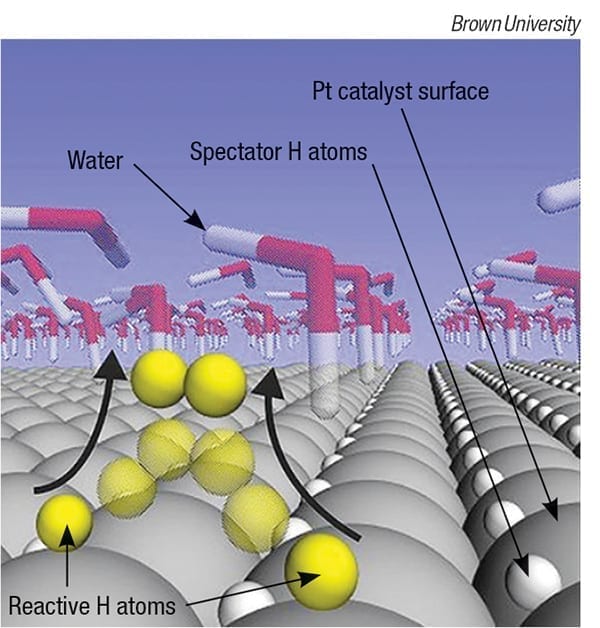 Rather than using “just-right” binding energies as the main catalyst design principle, the researchers suggest that “designing catalysts that put hydrogen in this highly mobile and reactive state is the way to go.” It’s this “freedom of movement for hydrogen atoms on the surface that makes platinum so reactive,” Peterson says.

The researchers’ insights could aid atomic-scale catalyst design that achieves activities similar to that of platinum.