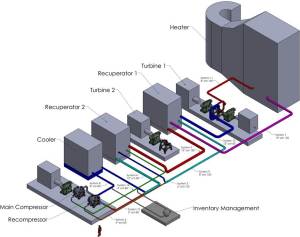 A major demonstration:  The team of SwRI, GTI, and GE Global Research will design, build, and operate a 10 MWe pilot plant for demonstrating supercritical carbon dioxide (sCO2) power cycles. The plant, shown here in an engineering concept drawing (click to enlarge), will be located at SwRI’s headquarters in San Antonio. Southwest Research Institute

Supercritical carbon dioxide (sCO2) cycles—which are inching closer to commercial applications for waste heat recovery, concentrating solar power, nuclear, and fossil energy—offer higher thermal efficiencies and power density than conventional steam Rankine and Air Brayton cycles in use today for power generation. But to realize these potentially game-changing cycles, common challenges associated with turbomachinery must be overcome, experts from the Southwest Research Institute (SwRI) said as they presented a tutorial on December 12 at the Turbomachinery Symposium in Houston.

During their tutorial, which provided an overview on ongoing research on sCO2 power cycles and associated turbomachinery, the experts noted that SwRI is designing and should soon begin building a 10-MW grid-connected pilot project at the organization’s campus in San Antonio, Texas, that will use sCO2 Brayton power cycles.  The Gas Technology Institute (GTI) will lead the six-year pilot project at the “Supercritical Transformational Electric Power (STEP)” facility (Figure 1) as well as provide system engineering, and test management, and GE Global Research will be responsible for turbomachinery design and fabrication. Additional project support will be provided by original equipment manufacturers, international research and development organizations, universities, and power system utilities.

Big Benefits All Around

sCO2 Brayton power cycles operate in a manner similar to other turbine cycles, but their high-power-density turbomachinery uses sCO2 as the working fluid. According to the U.S. Department of Energy (DOE), which has provided $80 million in federal funding for the STEP project, no commercially feasible sCO2 facility exists for high temperature and high-efficiency system testing, even though the technology has been under development for decades.

The U.S. has one of few state-led efforts to develop sCO2 cycles. Others include South Korea, which is exploring a sCO2 Brayton cycle for a small modular reactor, and China has funded research into a cascaded sCO2 system integrated with solar and biomass.

The DOE touts the technology’s economic and environmental benefits. These include a “broad applicability to [a] variety of heat sources.” Its applications can be expanded to power generation from nuclear, coal, gas, oil, concentrating solar, waste heat recovery, and geothermal. Also notable is that the sCO2 Brayton cycle has the potential to surpass 40% efficiency, compared with Rankine’s efficiency of 33%. That translates into reduced fuel consumption and emissions, low cooling water consumption, and a compact design that should lower capital cost. The initiative will also progress U.S. global competitiveness and it supports President Trump’s Climate Action Plan, the DOE said.

In the U.S., a handful of projects are underway to demonstrate the sCO2power cycle. In March 2016, Durham, N.C.–based NET Power along with Exelon Generation, CB&I, and 8 Rivers Capital, broke ground for a 50-MWt plant to demonstrate the sCO2 Allam cycle. NET Power’s Allam Cycle—named for its lead inventor, Rodney Allam—burns natural gas (or synthetic gas from coal gasification) with pure oxygen and uses high-pressure, sCO2 as a working fluid in a semi-closed loop to drive a combustion turbine. Its byproducts are mostly liquid water and the CO2 that is recycled by the process.

On December 12, NET Power spokesperson Walker Dimmig told POWER that construction at the demonstration project in La Porte, Texas,  is “largely complete, and right now we’re in commissioning and early startup.” Dimmig said projecting an exact date for start of operations was difficult: “Given that this is a test facility, as you might imagine the commissioning, startup, and early testing schedule is very different than it would be for a commercial facility using a well-proven process.  It’ll be a very methodical, careful process, and we don’t have a specific public online date.”

Sandia National Laboratories, which notably houses the world’s only engineering-scale sCO2 recompression-closed Brayton cycle (Figure 2), is investigating a dry-cooled sCO2 Brayton cycle to increase the power conversion efficiency and reduce water consumption in concentrating solar power plants. Sandia says, however, that a “major challenge is the transfer of heat from CSP (very high temperatures) to the Brayton power loop.”

Another sCO2 cycle project that is showing more solid promise—and could be online by 2020—is Echogen’s 7.2-MW waste heat recovery system. The project will combine oxy-combustion to capture CO2 from coal plants with an indirect-fired sCO2 cycle for waste heat recovery. The DOE has poured $1.7 million into the project that is being led by the Electric Power Research Institute (EPRI) and otherwise backed by Babcock and Wilcox, Doosan, Dresser-Rand, GE Power, and Howden Group. That project is currently in cost-estimating phase, EPRI said.

The STEP project promises to provide valuable data on potential challenges for continuous operation of the sCO2 cycles on a larger scale, the SwRI researchers said on Tuesday. Research will focus on whether indirectly heated cycles are applicable to advanced combustion boilers. It will also explore whether sCO2 thermal efficiency of more than 50% is possible at turbine inlet temperatures a little higher than 700oC—which is three to five points higher than ultrasupercritical steam cycles at the same temperature. Finally, it will look at whether the cycle is adaptable for dry cooling; and high fluid density and low-pressure ratio enable compact turbomachinery.

But according to SwRI’s Tim Allison, the team has already encountered challenges designing the compact turbomachinery the technology needs. Combinations of pressure, temperature, and density of sCO2 power cycles are outside the experience base of existing turbomachines, and resolving challenges posed by sCO2 turbomachinery design will be integral to realize these cycles, he said.

Wilkes added that technology’s future economics are being considered as SwRI designs STEP. However, he noted, because a supply chain for component materials that are necessary to the build the first-of-its-kind project don’t yet exist, obtaining materials has been costly.

The developments have been slow to emerge but advances are certain, said Moore. “Unfortunately, steam has 100 years on us, so we’re playing catch-up,” he said.

See an extended version of this story at powermag.com: http://www.powermag.com/game-changing-supercritical-co2-cycles-are-closer-to-commercialization/

Related Content
Digital Tools To Move Turbomachinery Into the Future
As with many industries, turbomachinery is experiencing a shift toward all things digital. The two main results of the digitalization…
Compressor Controls: The Burden of Load Sharing
Managing load-sharing controls for compressors was one of several topics explored by a group during several group discussions that…
A Focus on Maintenance and Analytics at TPS
Following an introduction from outgoing Turbomachinery Lab director Dara Childs, Jody Elliott, president of domestic oil and gas at Oxy…
This machinery-protection system provides early indication of fault development
The AMS 6500 ATG System is a standalone machinery protection solution that also allows users to cost-effectively introduce prediction monitoring…
Updated design software with new compressor-casing feature
This company has released Version 8.6 of its Agile Engineering Design System software, an integrated suite of computer-aided engineering (CAE)…