Ammonia produced using renewable energy is poised to be a crucial part of the hydrogen value chain as a mechanism for storing and transporting hydrogen. By combining two state-of-the art technologies for ammonia production and hydrogen storage, Hydrofuel Canada Inc. (Mississauga, Ont., Canada; www.nh3fuel.com) says it can significantly lower the costs of green H2 to near-parity with hydrocarbon fuels. The company has licensed the Micro-Ammonia Production System (MAPS) technology developed by researchers at the Georgia Institute of Technology (Atlanta; www.gatech.edu), a gas-phase electrochemical system that mimics the natural nitrogen enzymatic process to produce ammonia from air and water at ambient conditions with high yield and efficiency.

The MAPS process can fully run on renewable electricity, and can provide long-term emissions-free energy storage in the form of liquid ammonia. The process depends on hollow, hybrid plasmonic nanocages, which are said to triple the electrolcatalytic activity of the system (when compared to electrochemical systems utilizing solid catalyst nanoparticles) by increasing the available surface area for reactant contact. A key benefit of MAPS is the decentralization of ammonia production, making it ideal for fueling and energy-storage applications. Ammonia produced via MAPS requires few or no downstream separation or purification.

Coupled with the MAPS process is the patented reactor technology (diagram) developed by Kontak, LLC (Redmond, Wash.; www.kontakhydrogenstorage.com) that enables the highly efficient release of H2 from NH3, as well as a dozen other potential carrier molecules. H2 produced via Kontak’s reactor module is filtered and then can be directly sent to a fuel cell or combustion engine. Last year, Kontak was acquired by Hydrofuel Canada. 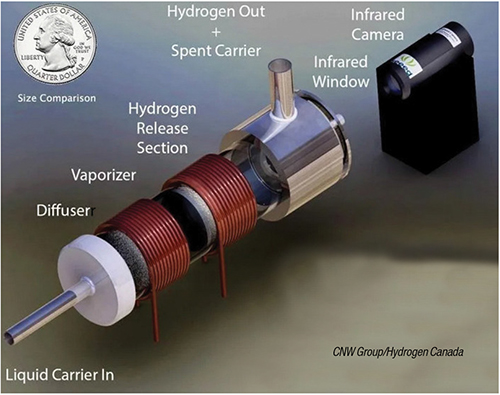