According to water-electrolysis specialist Nel Hydrogen, the market driving a large part of the significant growth in hydrogen generation via electrolysis is the chemical manufacturing industry, with especially large demand from applications like ammonia and methanol production, but also in a wide variety of other chemical pathways that require hydrogen, including petroleum refining operations and steel manufacturing. Nel notes that its sales pipeline for water electrolysis systems has increased tenfold in recent years.

Key drivers behind the significant growth projected in industrial markets for electrolysis focus around it becoming a lower cost green (low to no carbon footprint) alternative to hydrogen produced by fossil fuels, such as natural gas, oil or coal. The most common way to produce hydrogen is using natural gas as the raw material and running a process known as steam methane reforming (SMR). This process generates 10 to 12 tons of CO2 per ton of hydrogen. In contrast, electrolyzer technologies supplied with water and green electricity can produce zero-carbon hydrogen, making the switch to electrolysis an attractive way for corporations to help meet their sustainability goals. 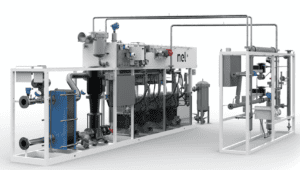 There are several elements that are rapidly changing the cost of hydrogen from electrolysis on both the OPEX and CAPEX side. On the OPEX side, rapidly growing proliferation of renewable energy, such as wind and solar, is resulting in lower cost electricity, reducing the OPEX piece of electrolysis. On the CAPEX side, significant advancements in electrolyzer technology and manufacturing capacity has reduced electrolyzer cost by more than 60% over just the last few years, says Nel Hydrogen.

One of many such projects featuring hydrogen electrolyzers is the Liquid Wind project, which is underway in Sweden. In this project, wind power will be used to split water into hydrogen and oxygen using electrolysis, then CO2 will be captured to react with the hydrogen to produce green methanol or eMethanol. The project consortium (consisting of Axpo, COWI, Carbon Clean Solutions, Haldor Topsoe, Nel Hydrogen and Siemens) will combine their expertise and technology to produce liquid, carbon-neutral fuel from captured carbon dioxide (CCU) and green hydrogen (from renewable electricity). The project is supported by a €1.7-million investment from EIT InnoEnergy and is a significant milestone in meeting growing demand for renewable fuels to enable more sustainable transportation. The consortium is currently designing the technology integration for the first facility, which is located in Sweden and expected to begin manufacturing eMethanol in 2023. Each facility will produce 45,000 metric tons (m.t.) of carbon-neutral fuel per year.

Another recent project won by Nel is the joint collaboration of three Swedish companies, the steel group SSAB, the mining group LKAB and the energy group Vattenfall ‘Hybrit’, short for ‘Hydrogen Breakthrough Ironmaking Technology’, is set to produce fossil-free steel from 2020 onwards. At a plant in Luleå in northern Sweden, the conventional production method is being given a dramatic facelift.

The production of pig iron, which is later made into crude steel, uses iron ore as a basic material together with what is referred to as a reducing agent, which removes oxygen from the iron ore. Traditional pig iron manufacturing processes usually use coke as a reducing agent. However, in doing so carbon and oxygen produce the climate-damaging gas carbon dioxide. The new production process uses hydrogen instead of coke, which also reacts with the oxygen in the iron ore, but the result is water vapor rather than carbon dioxide. The hydrogen itself is produced climate-neutrally with electricity from renewables. As such, the process could ultimately produce genuinely ‘green steel’. The Swedish Energy Agency has calculated that this process could reduce the CO2 emissions of the entire country by up to ten percent.

Furthermore, electrolysis is not limited to only generating hydrogen and oxygen, as there is also interest in other green gasses for the chemical process industries. Nel has been working with Berkeley, California-based Opus 12 under a Joint Development Agreement to build a modified electrolyzer using a new family of CO2-reducing catalyst. This new system can bolt on to any source of CO2 combined with water and renewable electricity to produce carbon-based products and pure oxygen. This new technology can address over a $65-billion market by 2025 and can reduce over 10% of the world’s CO2 emissions. Nel expects this technology to become commercial over the next few years.