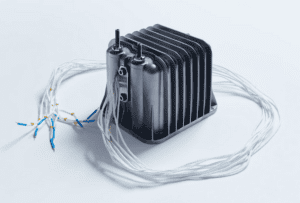 Haldor Topsoe A/S (Lyngby, Denmark) will invest in a manufacturing facility producing highly efficient solid oxide electrolyzers (SOEC) with a total capacity of 500 MW per year with the option to expand to 5 GW/yr. With efficiencies above 90%, Topsoe’s proprietary SOEC electrolyzers offer superior performance in electrolysis of water into hydrogen, when compared to today’s standard alkaline or PEM electrolyzers. The facility is expected to be operational by 2023.

With the new facility, Topsoe will accommodate the rapidly increasing demand for competitive electrolysis technology, predominantly for green hydrogen plants based on renewable electricity. Development of the automated manufacturing facility, that will be the largest of its kind, is ongoing. Construction will commence in 2022 in order for the facility to be operational by 2023.

“This new manufacturing facility is a concrete step to take a leading role in the ongoing energy transition towards a low carbon future,” says Roeland Baan, CEO of Haldor Topsoe “We strongly believe that one of the most viable routes to this goal lies in the efficient utilization of renewable electricity to produce green hydrogen, fuels, and chemicals. With Topsoe’s SOEC electrolyzer, more than 90% of the renewable electricity that enters the electrolyzer is preserved in the green hydrogen it produces. This is significantly more efficient than the other available technologies in the market. Topsoe already has a number of technologies and several others under development that will ensure that the company will play a leading role in the energy transition, reducing carbon emissions world-wide. The decision to build this large-scale production of our SOEC technology shows that we are willing and ableto translate our ambition into reality,” says Baan.

Topsoe is currently a global leader in hydrogen technology, catalysts, and services that enable efficient production of hydrogen. Offerings include technologies for traditional natural-gas-based hydrogen production with the option of carbon capture, also known as blue hydrogen, as well as green hydrogen with the SOEC electrolyzer technology.

Topsoe is already engaged in several projects to produce green hydrogen, green ammonia, green methanol, and green fuels. An example is the NEOM-project, announced in July 2020, which includes the world’s largest ammonia loop delivered by Topsoe. With the SOEC technology and decades of experience as a world-leading technology provider within ammonia, methanol, gasoline, jet-fuel, diesel, and hydrogen, Topsoe is one of the very few companies that can deliver insights and technology along the entire value chain for next-generation fuels and chemicals.

“Our unique end-to-end offering within green hydrogen production by electrolysis and the associated downstream production of ammonia, methanol, and e-fuels offers customers high-value products, safe transportation, and energy-efficient storage, and we are already talking with potential customers who are interested in being first movers in this space,” says Amy Hebert, chief commercial officer of Haldor Topsoe.