HydrogenPro has announced that what is said to be the world’s largest electrolyzer has arrived at HydrogenPro’s test facility at Herøya, Norway. 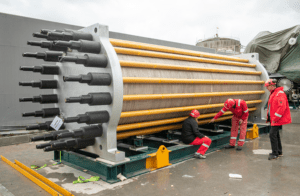 The arrival of the world’s largest electrolyzer (Source: HydrogenPro)

Chief Commercial Officer Erik Christian Bolstad is very excited about HydrogenPro’s future. “It was with great excitement and joy that I witnessed the reception and placement of the large electrolyzer at our test plant at Herøya today. This marks a significant milestone for HydrogenPro and the further verification of our technology for large-scale green hydrogen production. The plant results will help optimize our delivery to one of the world’s largest factories for green hydrogen, he says.

The electrolyzer will be assembled and installed in the upcoming weeks, with the validation process initiated when possible.