Imagine looking into a sight glass for a routine tank inspection, and seeing for the first time numerous scratches and potential points of contamination. What could have happened?

As more operators switch to light-emitting diode (LED) lighting to illuminate the interior surfaces of process vessels, many are often alarmed by the sudden appearance of scratches that appear on the vessel walls. In most cases, these are “false positives” caused by improper application of LED lighting. This article discusses the science behind this phenomenon, and provides guidance on how to properly apply LED lighting to gain a more accurate view of your processes. 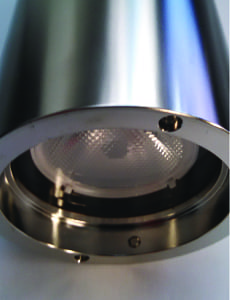 FIGURE 1. A light diffuser may be incorporated into the lens of a sight glass light (Source: L.J. Star)

Many pharmaceutical and biotech companies are switching to LED lighting in their process operations, either as part of a company’s environmentally friendly initiatives, or because of other advantages of LED lighting technology. In general, LED lights bring a variety of advantages. For instance, they have a far longer service life than traditional halogen bulbs, which reduces labor costs. LED lights can also be brighter, and their “color temperature” can be selected for optimal illumination of the process.

Unlike incandescent lights, LEDs emit very little heat compared to infrared light, which means they do not add heat to a process or environment. Finally, LED lights can be computer-controlled, which allows for dimming control.

However, LED lights will not be successful in an application unless they can provide an accurate view of the process. In order to prevent the appearance of insignificantly small scratches and surface features, LED lights used to illuminate process vessels should incorporate a diffuser in the lens.

A diffuser is a device that scatters light. They are commonly made out of translucent objects such as ground glass, Teflon or opal. Diffusers are a simple, affordable solution that can be specified at the time of sight-glass light selection (Figure 1).

For many pharmaceutical processes, some food-and-beverage processes and specialized chemical-process operations, visual inspection is often used to observe the characteristics of the process medium and to verify certain process steps, such as a clean-in-place efforts. Such visual inspections should show smooth, crevice-free surfaces that cannot harbor bacteria or other contaminants.

Halogen lighting — the traditional, filament-based lighting option — has a natural tendency to produce light over a wide area and spread that light in all directions (because filaments illuminate in all directions). Under such diffused light, a highly polished stainless steel vessel has a mirror-like finish.

By contrast, LED lighting emits light from a small area, making the light emit radially outward as if it came from a single point. This radially emitted light is mostly undiffused light, so it reflects off objects more uniformly. Undiffused light will reveal tiny imperfections in the steel surface that are in most cases inconsequential. Figure 2 shows the difference between diffused and undiffused light sources.

To illustrate the different effects of diffused versus undiffused light, Figure 3 shows photos of the same steel surface under diffused and undiffused light. The stainless steel is polished to a pharmaceutical-industry common surface finish Ra (roughness) of less than 20 micro-inches (µin; roughly equivalent to 0.5 micrometers).

When the images are transformed into a high-contrast (binary) image (Figure 5), the reason for the wide spread in the histogram of the undiffused intensity distribution is related to all of the scratches present in the photograph in Figure 5b. By contrast, the diffused light image (Figure 5a) does not show as much variation (almost none of the binary image is white).

When an optic reflection model — called the Phong Reflection Model (box, p. 56) — is applied, then the mechanism for how undiffused light and diffused light behaves becomes more clear. The Phong Reflection Model is an empirical model for light reflection, which calculates the intensity of light using a number of inputs (see sidebar, below, for details). It is commonly used in reflection calculations for computer rendering [ 1 ].

Because no surface is perfectly smooth — even highly polished stainless steel has tiny hills and valleys on its surface — these imperfections affect the angle at which the light reflects [ 2 ]. The smaller the angle between the vectors, the more intense the reflection. The model predicts that the intensity of the diffused light will be constant for any viewer angle, and that undiffused light will reflect light more intensely in some areas when viewed at certain angles. 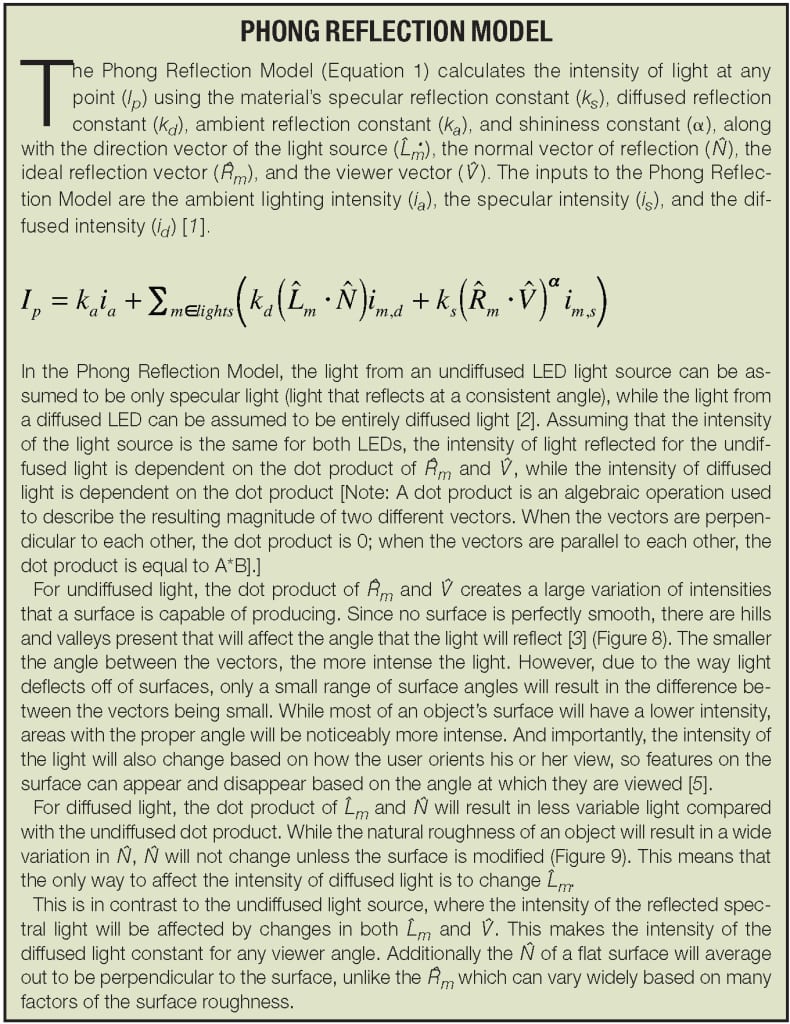 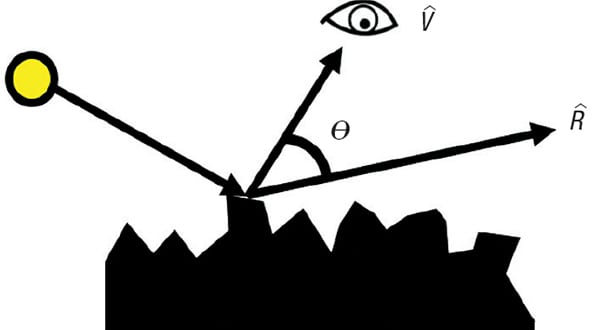 FIGURE 8. When spectral light reflects off of an uneven surface the difference between the reflection vector and the viewer vector affects the intensity of the reflected light 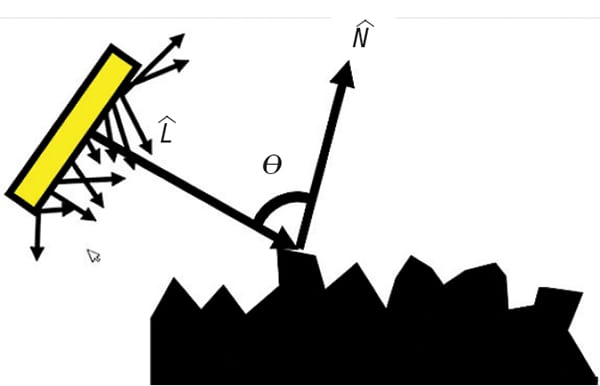 FIGURE 9. When diffused light reflects off of an uneven surface, the difference between the light vector and the normal vector affects the intensity of the reflected light

The difference between undiffused and diffused light on stainless steel does not end with how the light reflects off the steel. The geometry of the light source also affects the appearance of the steel surface. When the light source does not have an area much greater than the object it is illuminating, then hard light is produced [ 3 ] (Figure 6). The light-producing region of a typical LED is on the order of a square millimeter or less, which is relatively small. 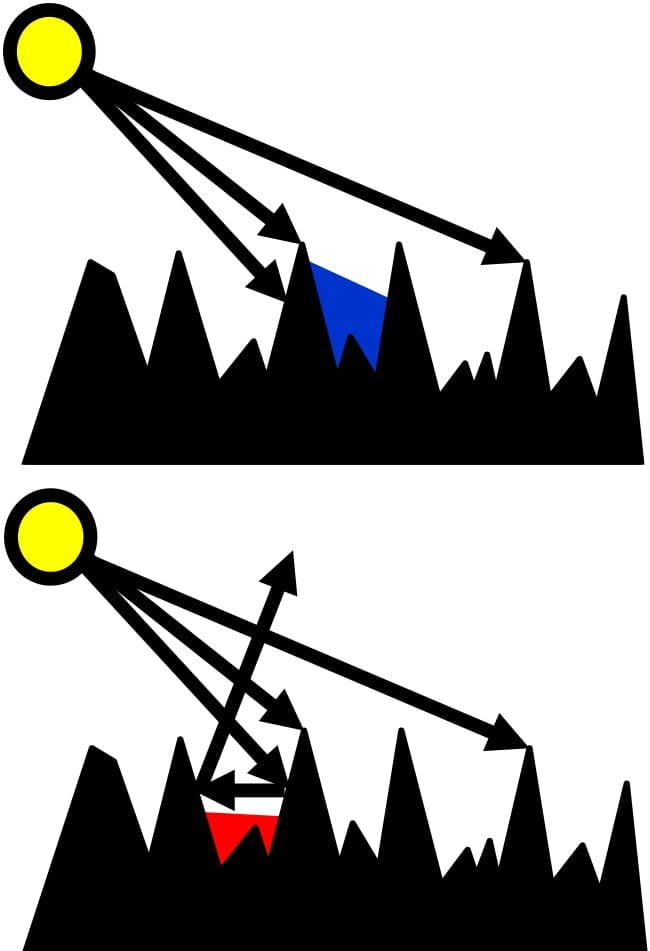 By contrast, soft light does not produce shadowing and masking, because the light hits the steel at a variety of angles.

Diffusers have a surface area that is measured in square centimeters, much greater than the imperfections on the surface of the steel, and therefore the light is soft. Soft, diffused light reduces the prominence of surface imperfections of steel through the reduction of both shadowing.

Mathew Hildner is a research and development engineer at L.J. Star, Inc. (same address as above). He holds a B.S. in mechanical engineering from Massachusetts Institute of Technology (MIT).