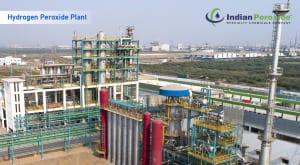 Along with new plant complex, IPL plans to invest Rs. 750 Cr in next 3–5 years including capacity expansion for other chemical units leveraging synergy with the new H2O2 plant. Located in industrial hub of Dahej, Gujarat, the manufacturing facility with a production capacity of 45,000 ton/yr of hydrogen peroxide started its first commercial delivery on October 10, 2018. The chemical complex sprawling across 150,000 m2 is one of the biggest hydrogen peroxide manufacturing facilities in India. Production process is based on patented, proprietary technology offered by EB Nuberg (Gunnilse, Sweden; http://ebnuberg.com).

The plant aims to serve the increasing local demand primarily for premium quality and high concentration grades of hydrogen peroxide used in demanding applications within the paper & pulp, textile and waste water treatment industries among other applications across different industries. The plant adheres to world class standards for health, safety and environment (HSE). With a focus on environment, Indian Peroxide Limited uses the Zero Waste Discharge Process. This process allows recycling of water and chemicals leaving no wastage of liquid in the whole production process. The chemical produced will be supplied through 35 and 50 kg carboys and tanker transport system of 20–25 ton capacity.

The new plant will help India in saving significant part of its hydrogen peroxide import bill. In 2017, India imported about 25% of its total hydrogen peroxide consumption. “IPL’s new hydrogen peroxide complex is a flagship project for Indian market to support its growing demand for premium quality and environment friendly hydrogen peroxide. With best-in-class engineering and technology, we will set standards in terms of product quality, efficiency and environmental friendliness. The Swedish technology used in the production process ensures high quality H2O2 that will help end users to deliver better quality products to their customers,” says AK Tyagi, chairman and managing director, Indian Peroxide Limited.