Turning Up the Heat on Valve Train Safety
Despite their nearly universal use in industrial combustion processes, valve…

Ion-exchange beads for lithium extraction
With lithium demand higher than ever, processors are increasingly turning…

Piloting a new sewage-treatment process to tackle emerging contaminants
As new types of water contaminants continue to emerge, such…

Industry Mentors: An Integral Part of Education
An experienced engineer who mentors young engineers and a student…
FEATURE REPORT

Steam Quality Considerations
Steam often provides the majority of heat, but its quality…
FACTS AT YOUR FINGERTIPS

Facts at your Fingertips: Nucleation Phenomena in Crystallization
Industrial crystallization processes are widely used in the chemical process…
TECHNOLOGY PROFILE

The launch of a next-generation ozone technology
After four years of development, this company is now launching… 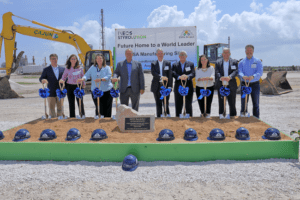 INEOS Styrolution (Frankfurt, Germany; www.ineos-styrolution.com) hosted a groundbreaking ceremony for its new ASA (acrylonitrile styrene acrylate) plant in Bayport, Texas. The development of the new site is part of a bigger expansion plan for the Americas, which includes increased ABS (acrylonitrile butadiene styrene) capacity at the Altamira site in Mexico, while transition the ASA production to the new site in Bayport.

The location of the new site was selected based upon its easy access to raw materials, being adjacent to the INEOS Styrolution’s styrene monomer plant, low cost utilities and proximity to major customer markets. The new site, which is designed for a production capacity of 100,000 metric tons per year (m.t./yr), is expected to be operational by 2021.

Speakers at the event included Kevin McQuade, CEO INEOS Styrolution. He emphasized the company’s ambitious plans for growth and INEOS Styrolution’s projects aiming at a circular economy for styrenics.

Alexander Glueck, President Americas at INEOS Styrolution, added: “I am excited to see us building the most efficient dedicated ASA plant in the world, here in Bayport. ASA is a versatile high performance styrenic resin. Its properties make it the material of choice for numerous outdoor applications. ASA performs greatly in exterior automotive and construction applications.”

Cathy Culpepper, Vice President Manufacturing Americas, summarized her presentation on manufacturing and project excellence at Styrolution in one sentence: “Operating in a safe, environmentally and socially responsible manner is part of INEOS Styrolution’s mission.”

The Big 6 level measurement technologies, where to use them and why

ON-DEMAND WEBINAR The Big 6 level measurement technologies, where to use them and why In this session, MS Sreekeanth, a Global Product Manager in ABB’s Measurement & Analytics business, will discuss the typical advantages and applications for…

Easy Installation of the AMS Asset Monitor
More from GEA