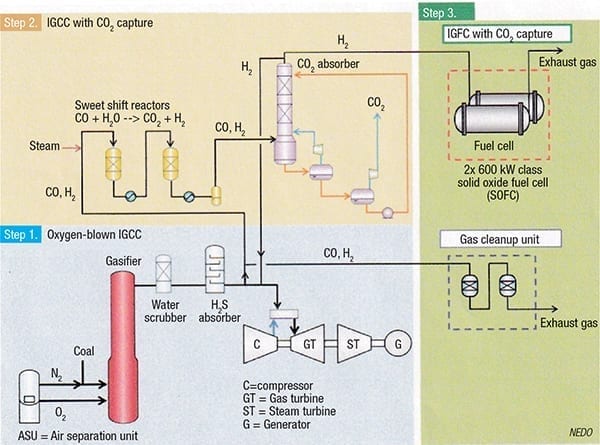 For the first step, a 170,000 kW-class demonstration test facility was constructed within the grounds of the Osaki Power Station of The Chugoku Electric Power Co. During the demonstration tests, coal particles were used to operate a 1,300°C-class gas turbine, while using the heat generated to operate a steam turbine for combined-cycle power generation. The performance, operability, reliability, and economic feasibility as a coal-fired power generation system was verified. The targeted thermal efficiency of 40.5% HHV was achieved for an O2-blown IGCC using a 100°C-class gas turbine. They are forecasting a net thermal efficiency of approximately 46% will be achieved for a commercial plant that uses a 1,500°C-class gas turbine. Based on these results, they are expecting to reduce CO2 emissions by about 15% compared to ultra-supercritical (USC) pressure pulverized-coal-fired power generation.

To demonstrate the second step, construction work on the CO2-capture unit was completed last summer, and testing started in December 2019 and will continue through 2020. Meanwhile, construction has also begun on the third step, in which the fuel cell will be added to the O2-blown IGCC to demonstrate the complete IGFC with CO2 capture, which should begin late 2021 and run through 2022. Ultimately, the project aims to achieve a net thermal efficiency of approximately 47%, while capturing 90% of the CO2, and a 40% of transmission end efficiency when applied to a 500-MW-class commercial unit.

Related Content
A Pt-free electrode promises to cut costs for fuel cells and metal-air batteries
Hiroya Abe and colleagues at Tohoku University (Sendai, www.tohoku.ac.jp) and Hokkaido University have developed a method to fabricate a highly…
Symmetrical fuel-cell design simplifies CO2 conversion
A new carbon-utilization technology developed by SeeO2 Energy Inc. (Calgary, Alta., Canada; www.seeo2energy.com) takes advantage of thermodynamics in a high-temperature…
Driving Toward a Hydrogen-based Economy
Technology developments are progressing towards large-scale production of ‘green’ hydrogen, along with improved methods for storage and transportation The world…
Electrochemical separation and compression of hydrogen
Hydrogen gas is used widely in industry, including in metal annealing, float-glass production and silicon wafer manufacturing, among others, but…
A methane fuel cell that operates at lower temperatures
Existing methane fuel cells typically require high (750–800°C) temperatures to activate methane in a separate methane reformer that creates hydrogen…