JDA to advance conversion of syngas to ethylene

The development project will involve Enerkem’s gasification process, which is capable of generating synthesis gas (syngas; CO and H2) from a wide range of feedstocks, including MSW, biomass and polymers, including polyvinyl chloride (PVC) and polyethylene terephthalate (PET). Enerkem’s gasification platform involves gasification of sorted feedstocks by thermal cracking in a bubbling, fluidized-bed gasifier, followed by purifying and separating the syngas (diagram). Currently Enerkem converts syngas to methanol and ethanol. 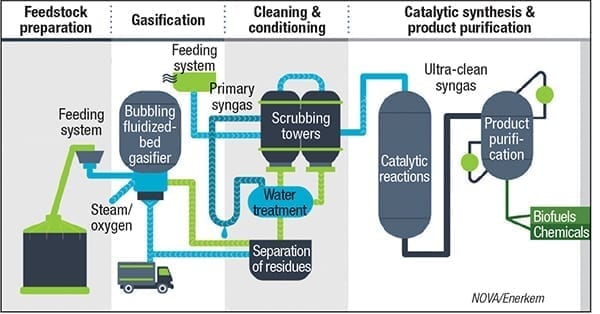 “By advancing recycling technology to transform syngas to ethylene, we aim to create a plastics circular economy that lowers the energy intensity and cost of the process compared to other routes, such as ethylene via syngas and ethanol,” says Sarah Marshall, director of sustainability at NOVA Chemicals. “A vital parameter is the carbon efficiency — the percentage of carbon in the plastic waste that is turned into useful product (preferably ethylene),” added Peter Nieuwenhuizen, Enerkem’s vice president of technology strategy and deployment.”

The research will be conducted at existing facilities — NOVA Chemicals’ research will be conducted from the Centre for Applied Research in Calgary, while Enerkem will be working at its facility in Edmonton, Alberta, with further expertise coming from its team in Westbury, Quebec. Pilot equipment is foreseen to be built in in Edmonton, NOVA Chemicals says, making use of Enerkem’s next-door Edmonton Alberta Biofuels (EAB) facility, which produces syngas from waste, to make biofuels.

“Project success relies not only on finding a technical pathway from syngas to ethylene, but also on achieving the economics to successfully scale the technology,” NOVA’s Marshall says.