A new membrane technology for separating carbon dioxide from exhaust gas will be scaled up for real-world testing under a project to evaluate low-cost CO2 capture at a coal-fired power plant. Design and testing of an engineering-scale CO2-capture system will be jointly overseen by GTI (Des Plaines, Ill; www.gti.energy) and The Ohio State University (Columbus, Ohio; www.osu.edu). The project aims to conduct tests on coal fluegas at the Wyoming Integrated Test Center.

The CO2-selective membrane, developed by Ohio State researchers, consists of a layer of non-volatile, amino-group-containing compounds coated onto a nanoporous polymer support. When CO2-containing fluegas contacts the membrane, CO2 molecules dissolve into the membrane by combining reversibly with the amino groups in the membrane to form protonated amine cations and bicarbonate anions. The ions are transported across the membrane via two separate routes in a “facilitated transport” mechanism — in the first, the CO2 molecule “hops” from one covalently bound amino-group site to subsequent adjacent sites, and in the second, CO2 reacts with a mobile carrier (an amino acid salt) that diffuses across the membrane (diagram). CO2 is released to the low-pressure side of the membrane when it desorbs from the amino sites, leaving them in the membrane. 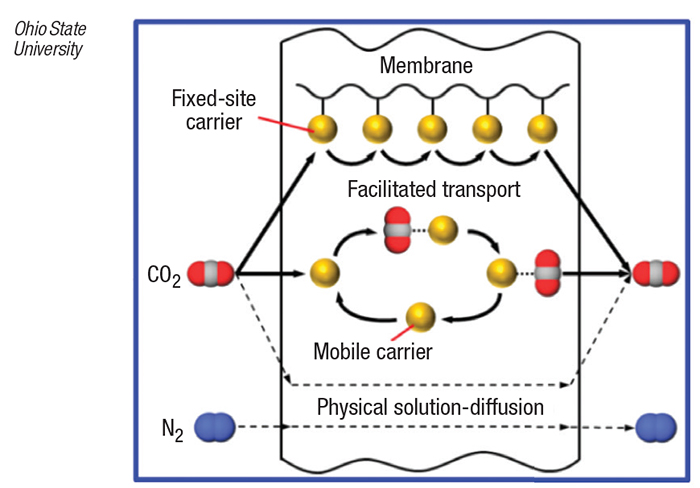 Since trans-membrane diffusion of other fluegas components (mostly N2, which cannot react with the amino sites) is extremely slow, the membrane can selectively separate CO2 from a fluegas stream.

Membrane-based CO2 capture has advantages, Ohio State professor Winston Ho explains: “The membrane combines the absorption and desorption of CO2 onto and off of the amino sites into a single step, so no amine regeneration is required as in conventional absorption-based technology. Therefore, we can avoid the ‘energy penalty’ that you would find for carbon capture based on amine solutions.” Further, the membrane system can operate continuously, while solution-based CO2 capture requires two stages: absorption and regeneration. “And by converting the amino groups to sterically hindered amines using bulky isopropyl groups, for example, we can increase the CO2 sorption capacity,” adds Ohio State research scientist Yang Han.

The Ohio State team has rolled the membrane material into 21-in. by 8-in.-dia. spiral-wound modules for inclusion in the test project, which has a goal of capturing CO2 at 95% purity and a cost of $30 per ton of CO2 captured. Performing engineering-scale studies and maturing technology in a real-world environment will help validate the system for market introduction and move it into utility and industrial use at new and existing facilities, according to the project coordinator, GTI’s Shiguang Li.

The project was selected for funding by the U.S. Department of Energy’s National Energy Technology Laboratory (Morgantown, W.Va.; www.netl.doe.gov).