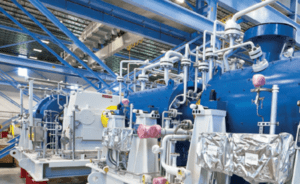 MHI Compressor International Corp. (MCO-I; Houston) will supply the compression for Gulf Coast Ammonia’s (GCA) new state-of-the-art ammonia production facility in Texas City. The equipment will be purchased by Air Products, which will build and operate the facility in parallel with its largest ever U.S. investment. The equipment on order includes two compressor trains: a Syngas Compressor Train and an Ammonia Refrigerant Compressor Train. Together, the two trains consist of four compressors and supporting auxiliary systems.

The compressors will be jointly built and tested by MHI Compressor Corp. (MCO) at its factory in Hiroshima, Japan and at MCO-I’s Houston facility. All trains are to be packaged at MCO-I.

The order further establishes MCO-I as a premier vendor for compression in ammonia applications. GCA’s ammonia facility will produce approximately 3,600 metric tons per day of ammonia, which will make it the world’s largest ammonia plant once fully operational.

Clayton Jurica, sales manager, MCO-I, says “MCO-I has successful and wide-ranging history of experience in large capacity ammonia, which contributed to the success of this order. This demonstrable expertise, coupled with MCO-I’s ideal location on the Texas Gulf Coast, approximately 40 miles from the future job site, made MCO-I the ideal candidate for the supply and long-term support of the equipment.”

Related Content
‘Green’ hydrogen to be converted to ammonia using Haldor Topsoe technology
The world's largest "green" hydrogen project — a $5-billion investment to be located in NEOM, Saudia Arabia — will use…
The World’s Largest ‘Green Hydrogen’ Project Will Supply 650 ton/d Hydrogen
Air Products (Lehigh Valley, Pa), in conjunction with ACWA Power and NEOM, announced the signing of an agreement for a…
Digitalization adds value to compressor and blower units
AERprogress is a suite of customized digital services for compressors and blowers from this company’s Delta series. With AERprogress, the…
Kobe Steel turns non-standard compressor affiliate in China into subsidiary
Kobe Steel, Ltd. (Tokyo, Japan) has turned its Chinese affiliate, Wuxi Compressor Co., Ltd., into a subsidiary after acquiring additional…
Siemens to supply compression equipment for Pertamina’s Balikpapan Refinery
Siemens Gas and Power GmbH & Co. KG (Erlangen, Germany) has been selected to supply a range of compression and…

The Big 6 flowmeter technologies: Where to use them and why

WHITE PAPER — The Big 6 flowmeter technologies: Where to use them and why Flow is one of the most frequently measured process variables throughout industry, and one where the choice in measurement technology is critical. In fact, no single flowmeter…