Temperature control under a pressure blanket
This company has expanded its product range for demanding temperature-control…
Highlights Recently Published Books for the CPI: May 2021Facts At Your Fingertips: Evaporator Equipment TypesFocus on Maintenance ToolsImmersive technologies advanceAdvanced Analytics for Process Safety

MOL Group (Budapest, Hungary; www.mol.hu) announced that it has completed a rubber bitumen plant at the Zala Site, representing an investment of around $10 million. The facility, built in one year, is capable of producing 20,000 metric tons per year (m.t./yr) of rubber bitumen. As well as recycling 8-10 percent of Hungarian domestic tire waste, the new plant will contribute to the efficient operation of the Zala Site and to the preservation of over 100 jobs.

3,000 tons of rubber scrap per year is used to produce rubber bitumen through the recycling of about half a million used tires, about 8-10 percent of the annual domestic tire waste. The new plant can produce about 96 tons of rubber bitumen per day, annually this translates into 20,000 tons of raw material for road construction, enough to construct a new 2×1 lane 200 km highway or to refurbish the upper layer of 600 km of a 2×1 lane highway. 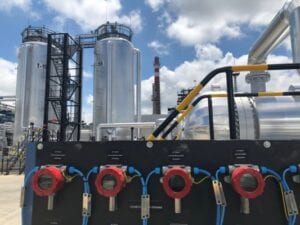 In 2012, MOL opened and successfully operated a pilot plant for rubber bitumen with an annual capacity of 5,000 tons at the Zala Site. In response to increased demand, MOL started building a new plant in the spring of 2019. The plant was completed in just over a year and, despite the COVID pandemic, continued to be built with the appropriate precautions in place. It is an important achievement that no working days have been lost during the project implementation.

“The 96 tons per day capacity is sufficient to meet the demand for bitumen for larger volumes of road construction works. What’s more, this amount also provides the possibility to exploit new business opportunities in surrounding countries. With chemically stabilized rubber bitumen being a MOL patent, the sale of the license could be an additional utilisation opportunity, for which the new plant serves as an excellent example. In the last 8 years, about 150 km of road sections have been built or refurbished in Hungary using rubber bitumen, which can now increase in volume due to the newly added production capacity. The production of 20,000 tons covers about 10-15% of the domestic bitumen demand. MOL Group is aiming to establish itself as the market leader for recycling in Central and Eastern Europe, on the way to deliver on the company’s “Enter Tomorrow 2030” strategy, the completion of this new plant is another building block on our way”- said Tibor Zsinkó, Vice President, MOL Hungary Downstream.

All the necessary conditions are in place for rubber bitumen roads to become more and more widespread. Hopefully, this will result in road conditions improving noticeably in the long run, as the excellent adhesion of the rubber bitumen to minerals reduces the chances of pot-holes forming and its higher load capacity will result in a lower likelihood of ruts appearing. Around residential areas, it can be an important consideration for construction companies to use this to achieve significantly lower levels of traffic noise, reducing environmental noise pollution.

75% of the about USD 10 million investment was provided by MOL from its own resources, and 25% was financed through state aid within the framework of the Large Enterprise Investment Support Program.

The Zala Site is located about 200 kms south-west of Budapest, the capital city of Hungary. MOL has been producing hydrocarbons in the Zala Region for over 80 years. For over 50 years MOL has also had refining activities in the region, which resumed in 2001. The former Zala Refinery was turned into a bitumen hub and serves as the production unit of regular, polymer-modified and rubber bitumen.

The new production technology for rubber grit from bitumen and waste tires was developed by MOL together with Pannon University. The chemically stabilized MOL Rubber Bitumen was patented in 2009 and was awarded the Environmentally Friendly Product trademark in 2014. MOL Rubber Bitumen has been recognised domestically and internationally. Among others, in 2015 it received the Environmental Innovation Award at the Hungarian Innovation Grand Prix competition, and in 2016 in Manchester it won the IChemE (International Institute of Chemical Engineers) “2016 Innovative Product” award in a strong international field out of twenty-three applicants. MOL started working on the domestic production of rubber bitumen in the 2000s, already in use abroad at the time. According to the definition used in the USA, rubber bitumen is produced at the road construction site, as it needs to be used within a few hours due to the precipitation of rubber particles, additionally, special equipment is required to produce the asphalt. In order to create a new product that could be used in the same way as normal road construction bitumen, MOL, with Pannon University, developed the chemically stabilized rubber bitumen. MOL’s patented technology ensures that rubber bitumen can be transported, stored and used at a later date. This means it can be produced on a large scale and applied further away from the production site.

Related Content
Technology Profile: Acrylonitrile Butadiene Latex Production
This column is based on “Acrylonitrile Butadiene Latex Production – Cost Analysis,” a report published by Intratec. It can be…
Enviro and Michelin sign definitive agreements on strategic partnership
Scandinavian Enviro Systems AB (Gothenburg, Sweden) and the French global tire manufacturer Michelin have today signed three definitive agreements that…
Greenergy selects Haldor Topsoe technology to produce low-carbon fuels from waste tires
Greenergy has announced that they will invest in Front End Engineering Design (FEED) of a project to produce low-carbon transportation…
Looking ahead
This has certainly been a year to remember, and as 2020 comes to an end this month, I expect we…
Royal DSM and Neste enter partnership for bio-based, high-performance polymers
Royal DSM (Herleen, the Netherlands; www.dsm.com), a global science-based company in nutrition, health and sustainable living, today announced that it…