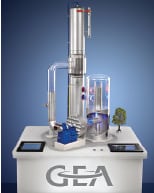 The operating costs of direct, steam-heated evaporators can significantly be reduced by revamping with mechanical vapor recompressors (MVRs), according to this company. For example, a four-effect, directly steam-heated evaporation plant, designed for 30 ton/h of water evaporation initially had a heating steam requirement of 8 ton/h of live steam. By revamping and heating with MVR, the energy demand could be reduced to 760 kW — an operating-cost savings of approximately €1.3 million/yr (based on prices of approx. €30/ton of steam and €0.1/kWh and about 8,000 h/yr operation). With an investment of less than €1.5 million, a return on sales after only 14 months is expected, says the company. This technology could be of interest for existing, as well for new evaporation plants. — GEA Wiegand GmbH, Ettlingen, Germany

Related Content
Evaporators: Energy Conservation Strategies and Process Control
Several strategies for improving energy consumption and process control in evaporation processes are presented here In industrial evaporation, a heat…
Hybrid wiped-film and fractionation systems
This company’s Hybrid Still technology (photo) is designed to separate extremely heat-sensitive fine chemicals and other substances. These systems combine…
Heat Transfer in Wiped Film Evaporators
Simulations demonstrate the complex, changing properties of materials within the evaporator. Such information can help in both designing and selecting…
Improve Efficiency with Better Evaporation and Drying Equipment
For every application, there’s an evaporator or dryer that can boost performance  In today’s economy, chemical processors must deliver high…
Evaporators designed for mining and water treatment applications
DriBoss evaporation equipment is designed for mining, water-treatment and oil-and-gas applications. The efficient DriBoss wastewater evaporator is supported by company-provided…