Drawing inspiration from the enzymatic breakdown of macromolecules in cellular systems, scientists at Ames Laboratory (Ames, Iowa; www.ameslab.gov) have developed a nanostructured catalyst that can break down high-density polyethylene (HDPE) and other polyolefins into a narrow distribution of diesel- and lubricant-range alkanes via selective hydrogenolysis. The development could be important in the quest for viable approaches to recycling single-use plastic waste. 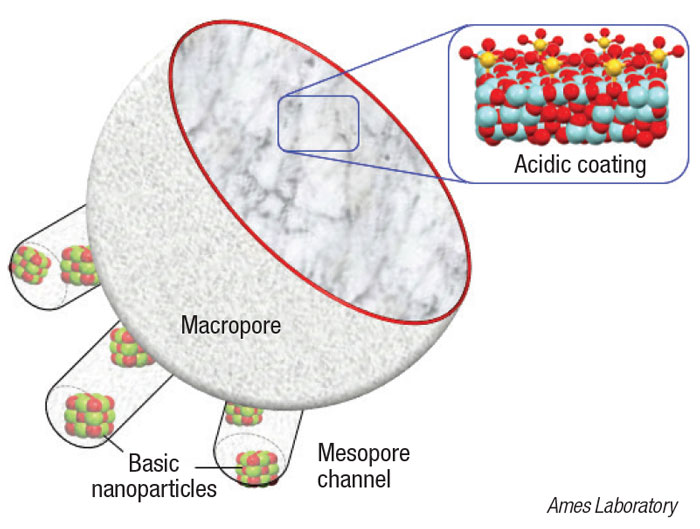 The newly developed nanocatalyst consists of a platinum core, surrounded by mesoporous silica nanoparticle channels (diagram). Long polymer chains thread through the silica pore channels to reach active sites on the Pt core. The catalyst’s structured design and size enable the nanoparticles to hold onto and cleave the longer polymer chains into consistent, uniform shorter hydrocarbons that have the most potential to be upcycled into useful end products.

“This type of controlled catalysis process has never before been designed based on inorganic materials,” says Wenyu Huang, associate professor of chemistry at Ames Lab.

Huang’s research team used solid-state nuclear magnetic resonance (NMR) to study the interactions between the polymer chains and the catalyst. As the team of scientists note, the NMR studies revealed that “long hydrocarbon macromolecules readily move within the pores of this catalyst, with subsequent escape being inhibited by polymer-surface interactions.”

This behavior resembles the binding and translocation of biological macromolecules in the catalytic cleft of processive enzymes (those that catalyze consecutive reactions without releasing the substrate, such as DNA polymerase). Simlarly, the hydrogenolysis of polyethylene with the new catalyst proceeds processively to yield a reliable, narrow and tunable stream of alkane products. “We were able to show that the catalytic process is capable of performing multiple identical deconstruction steps on the same molecule before releasing it,” Huang says.

This research project will be expanded and continued under the direction of the Institute for Cooperative Upcycling of Plastics (iCOUP), led by Ames Laboratory.