Analog and digital interface in a single sensor
Due to Dual Channel functionality —which enables sensor operation to…
Highlights Parallel Proceedings in the Aftermath of Industrial AccidentsWeathering the crisisProcess Changes: Understanding and Mitigating Fire-and Life-Safety Risk FactorsReliable and Cost-Effective Solids FeedingImproving Fire and Gas System Sensor Selection and Deployment for Tank Farms and Transfer Sites

A new project has been selected by the New Energy and Industrial Technology Development Org. (NEDO; Tokyo, Japan; www.nedo.go.jp) that aims to recover useful salts from desalination brine or seawater, as well as mineralizing CO2 into a useful product. The project is led by professor Takao Nakagaki, at the Faculty of Science and Engineering, Waseda University (www.waseda.jp), with industrial partners JGC Corp. (Yokohama; www.jgc.com) and Sasakura Engineering Co., Ltd. (Osaka; www.sasakura.co.jp). 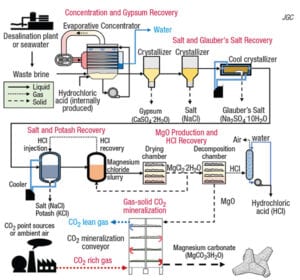 Among the goals of the project are to develop a technology to react CO2 with the magnesium recovered from seawater to produce MgCO3, a resource that can be used as a building material, such as the aggregate in concrete. If this technology is established and commercialized, it is expected to lead to a significant reduction in CO2 emissions while effectively utilizing waste.

Because seawater and desalination brine are abundant, this technology is expected to provide a significant amount of CO2 reductions. The other major ions in seawater and brine (calcium, sodium, potassium and sulfur) are also converted into industrial products (gypsum, salt, fertilizer, sodium sulfate and hydrochloric acid) without adding any additional chemicals. Additional fresh water is also produced. This production of multiple commodities increases profitability of the process.

Among the tasks for developing the overall process (flowsheet), Waseda University is responsible for: the development of a process to produce MgO from waste brine and MgO from MgCl2; the development of a process for gas-solid mineralization of CO2 using MgO; and the evaluation of MgCO3 usage in concrete. JGC will evaluate the usefulness of MgCO3, as well as study the feasibility for process scale-up and implementation. Sasakura Engineering will develop a low-energy nanofiltration (NF) method for producing MgCl2. NF membranes selectively allow monovalent ions, such as Na+ and Cl−, to pass through while preventing the transmission of divalent ions and pigments. This makes it possible to extract magnesium efficiently.