A new project is exploring a unique large-scale carbon-capture facility in the U.S. Technology developer Svante, Inc. (Burnaby, B.C., Canada; www svanteinc.com), is working with LafargeHolcim, Oxy Low Carbon Ventures, LLC and Total S.A., to evaluate the construction of a facility that will capture up to 725,000 metric tons per year of carbon dioxide from LafargeHolcim’s cement plant in Florence, Colorado. The facility would be the first large-scale commercial application of Svante’s carbon-capture process, which employs tailor-made nanomaterials instead of conventional liquid solvents.

“We are using nanomaterials called solid sorbents with a very high storage capacity for CO2,” explains Claude Letourneau, president and CEO of Svante. The company engineered these materials to capture and release CO2 in less than one minute, whereas traditional technology may take hours. According to Letourneau, this faster turnover time means that a much smaller volume of sorbent material is required, resulting in a much more intensified process and lower capital costs relative to traditional processes, such as liquid-solvents. Svante has also developed a rotating device with laminated filter structures to capture and release the CO2 and regenerate the sorbent in a single modular unit (diagram). This modular setup provides a smaller footprint than other technologies, which typically use three separate pieces of equipment.

Svante has patented the process, which is based on direct, rapid temperature-swing adsorption using fast kinetic materials and processes to control oxidation, water and CO2 degradation, along with avoiding the sorbent attrition associated with other adsorption approaches, says Letourneau. The company is currently using three classes of sorbent materials tailored for specific applications: silica doped with amines for natural-gas boiler fluegas; a metal organic framework (MOF) with high resistance to oxidation for cement applications; and a porous polymer network/MOF with high CO2 capacity at very low concentration for direct-air capture. Svante currently operates two pilot plants in Canada and one in France, the largest of which captures 30 tons/d of CO2. “We are currently designing a first-of-its-kind commercial-scale machine capable of capturing up to 325,000 tons per year,” adds Letourneau. 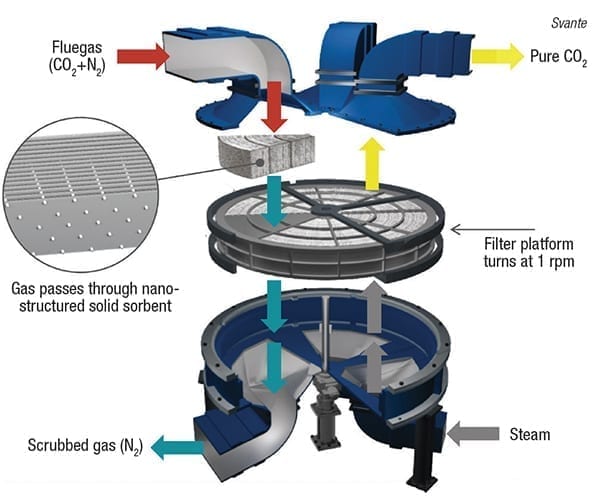