As long as fossil fuels are used for combustion processes — not only in power plants, but also furnaces in the glass and cement industries, boilers, steam reformers and others — the control of emissions from “traditional pollutants” will continue to be required. “NOx, SOx and H2S are the ‘bread and butter’ for companies like ours,” says Diego Tebaldi, general manager of the CR Clean Air Group LLC (Parsippany, N.J.; www.crcleanair.com). “There’s always a strong demand and repeat business from old systems that need replacing or renewing.

CR Clean Air Group has thousands of installations across the world addressing these core contaminant applications,” he says. The company designs and offers wet scrubbers, packed-tower scrubbers, and high-energy Venturi scrubbers to meet a variety of applications, ranging from arsenic and zirconium tetrachloride to chemicals like trimethylamine and dimethylamine, says Tebaldi (Figure 1). 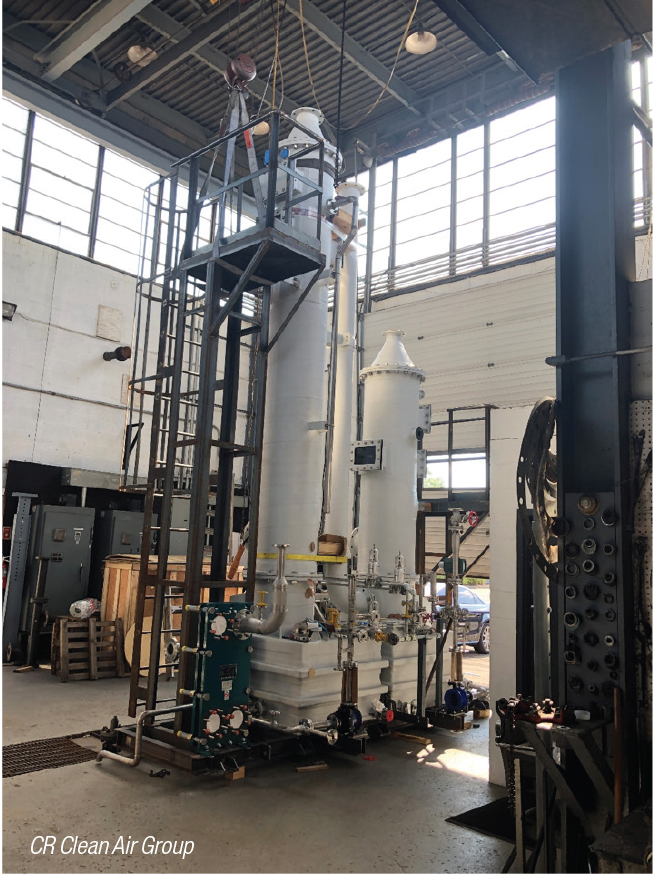 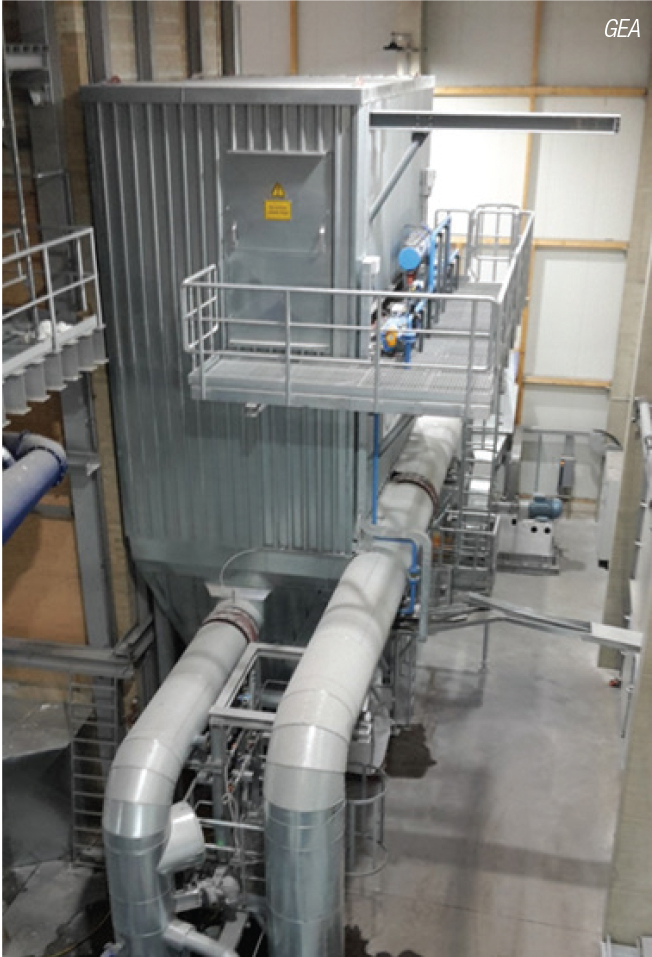 Particle separation takes place with the aid of filter elements made of mineral fibers. These ceramic candles are well proven and very flexible to use even with regard to modifications of operating parameters, especially at high gas temperatures. No cooling of fluegases is required and no thermal heat energy is wasted. Filter elements are cleaned from separated dust online during operation by means of separate, compressed-air jet pulses. The single or multi-sectional housings allow a maximum filter length of 6 m. Inorganic pollutants, such as HF, HCl and SOx can also be absorbed. Applications include the cement and glass industries, incinerators, petroleum refineries and roasters.

Haldor Topsoe A/S (Lyngby, Denmark; www.topsoe.com) has also been making progress on treating multiple pollutants. The company’s SNOX fluegas-desulfurization (FGD) process removes SO2, NOx and particulate matter from fluegas. The sulfur is recovered as commercial-grade concentrated sulfuric acid and the NOx are reduced to free N2. The catalytic process does not consume water or adsorbents, and generates no waste except the separated dust.

The SNOX process includes the following steps: dust removal; catalytic reduction of NOx by adding NH3 to the gas upstream from the selective-catalytic reactor (SCR); catalytic oxidation of SO2 to SO3 in the oxidation reactor; and cooling of the gas to about 100ºC whereby the H2SO4 condenses and can be withdrawn as a concentrated sulfuric acid product.

Last April, the Thai Oil Public Company Ltd. (Thaioil; www.thaioilgroup.com) signed an agreement for Topsoe’s SNOX process to remove sulfur, NOx and dust emissions from its Sriracha Refinery in the Chonburi province in the east of Thailand. This is part of Thaioil’s $5-billion Clean Fuel Project to produce cleaner transport fuels in a more environmentally friendly way. The Sriracha Refinery’s new energy recovery unit will use three parallel SNOX lines to remove SOx, NOx and dust from the new circulating fluidized-bed boilers.

Another focus of GEA is to recover valuables out of waste gas streams, explains Palinski. “By achieving much lower emission values through more efficient gas-cleaning devices, the concentration and quality of the eliminated substance is becoming much higher and allows users to sell the product at better prices, for example sulfuric acid with a high purity,” he says. The company will soon introduce its new, more-efficient Linear Flow Scrubber to meet these trends.

TopClaus also significantly reduces a petroleum-refinery’s CO2 footprint because it eliminates the need to incinerate tailgas. In addition, the WSA unit recovers as much as 90% of the process heat as valuable, superheated, high-pressure steam. The steam can be used in other refinery processes or for generation of electricity. This results in much lower operating costs compared to any conventional amine-based technology that uses steam for amine regeneration and requires tailgas incineration.

Instead of treating the fluegas directly, the Laminol technology removes sulfur components from the distillation overhead gas containing up to 60% H2S before it is combusted in the process furnace. Treating the waste gas in a stand-alone modularized unit meant that the unit was much easier to integrate into the existing refinery facility, says the company. The gaseous sulfur removed is converted into elemental sulfur in solid form.

“Laminol is a highly effective, and economically attractive, method for deep H2S removal at high concentrations,” says Lennard Spit, gas treatment specialist, Frames. “And unlike many other removal systems, the technology is robust and capable of infinite turndown and handling feed-gas fluctuations that are more representative of ‘real world’ refinery waste streams.”

Frames’ Laminol technology is the result of an in-house R&D program initially developed and applied in the biogas market where it provides a cost-effective alternative to conventional biogas sweetening processes. The Laminol technology is capable of selectively removing H2S from CO2-rich gas streams to a few parts per million (ppm) even at near atmospheric gas pressure and is suitable for treating any gas stream.

“Lately we have seen an area of further attention, which is more focus and activity to do with ethylene oxide and propylene oxide (EO/PO) contamination,” says Clean Air Group’s Tebaldi. “The company has one of the leading install bases for this, and we’ve seen renewed interest from existing and new customers as there are discussions about tightening regulations.”

“Our primary R&D [research and development] focus this year (2020), which will become operational in Q1 2021, is an improvement to the current handling of ethylene oxide and propylene oxide (EO/PO),” continues Tebaldi. Essentially, most uses of this come from either chemical process, medical sterilization or production. “Our current systems achieve 4-nines or even 5-nines removal rates with ease when it’s at high concentration, but we’ve noticed as regulations tighten, we’re seeing applications where a high level of CFM [cubic feet per minute] and very low level of contamination are prevalent. We’re close to finalizing a system that addresses that economically. All current systems, including ours, become economically unfeasible when you have over 10,000 ACFM [actual CFM] of flow, with low concentration levels. CR Clean Air Group is excited to help our customers address this particular need with our new systems in 2021. Once commercial, we’ll look at NOx and other areas for improvements,” he says. 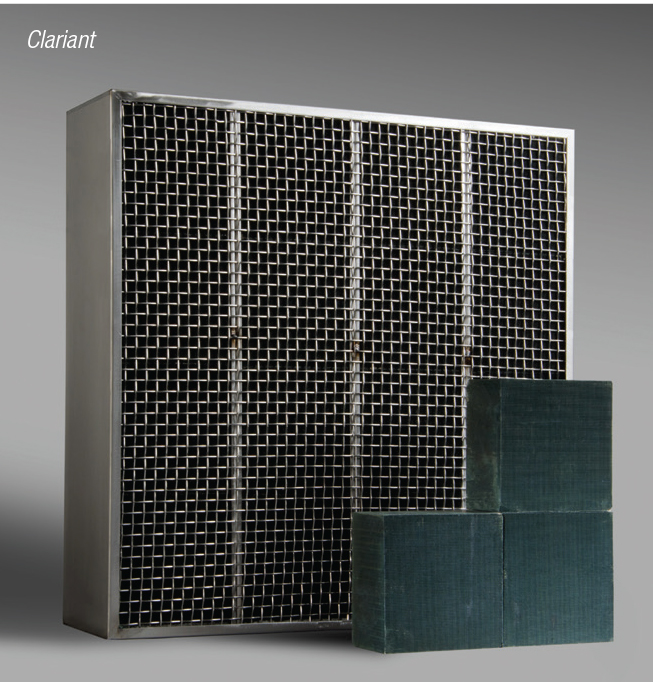 Figure 3. Clariant’s EnviCat VOC catalyst is being used to control emissions at a phthalic anhydride plant in China

Clariant’s extensive experience in off-gas treatment catalysts has resulted in the development and widespread use of its high-performance EnviCat VOC. The catalyst is proven to effectively remove both VOCs and CO with an excellent conversion efficiency of up to 99% and above. It operates at up to 400°C lower temperatures compared to other off-gas purification methods, such as recuperative thermal oxidation. This greatly reduces fuel consumption and equipment stress, leading to potential significant economic, operational, and safety advantages, says Clariant.

“Jiangsu Jinneng and Clariant have collaborated in off-gas treatment in China for over 10 years. We strengthen each other’s advanced technologies to offer each plant operator the ideal solution for their company and the environment,” says Chen Min Dong, general manager at Jiangsu Jinneng.

“The biggest upcoming megatrend is CO2 reduction by energy saving, such as using waste heat recovery,” says GEA’s Palinski. “In many industrial processes, thermal energy is released to the atmosphere unused and this so-called ‘waste heat’ can be made available by a waste-heat-recovery system (WHRS), and utilized for different purposes, such as electric power generation via an ORC (organic Rankine cycle),” he says.

According to Eric Meyer, Combustion Solutions consultant at Yokogawa Corporation of America (Sugar Land, Tex.; www.yokogawa.com/us), CO2 has been categorized as a pollutant due to the potential as a greenhouse gas. As such, most European countries have adopted carbon taxes ranging from under $1 per ton to over $100/ton. Canada has also adopted a carbon tax that will be $40/ton in 2021. The U.S. does not currently have a nationwide carbon tax but a few states have cap-and-trade schemes, says Meyer.

Large consumers of fossil fuels are looking to reduce their carbon footprints by improving process efficiency, reducing fuel consumption, improving use of waste fuels or by broadening their portfolios to include carbon-free production methods. Improving combustion in large consumers of fossil fuel can lead to a great deal of fuel savings, as well as a reduction of the carbon footprint, explains Meyer. If done properly, it can also lead to improved specific consumption for that unit. For example, the fuel savings that results from just 1% less stack oxygen in a typical steam methane reformer (SMR) can exceed $1 million year-over-year, and the reduction in carbon emissions would be over 27,000 tons per year. In Canada, that would be worth another $1 million per year in carbon tax. “The good news is that we typically see a sustainable improvement that is two to three times as much,” claims Meyer.

Yokogawa has a unique technology, CombustionONE (Figure 4), which can help fossil fuel consumers reduce fuel consumption, reduce carbon footprint, improve process stability, utilize waste fuels better, improve catalyst life and improve tube life. This is accomplished by an in-depth analysis of the furnace, resolution of issues that will prevent sustainable operation, and the application of improved instrumentation such as tunable-diode-laser spectrometers (TDLS). A TDLS allows rapid analysis of excess O2 and CO, realtime measurements of fuel density and combustion air flow, and the application of improved control logic. The result is sustained operation at 1% excess O2. “This is in stark contrast to the operation prior to the application of the solution, where we have seen excess O2 levels in the range of 3 to 7%,” says Meyer. 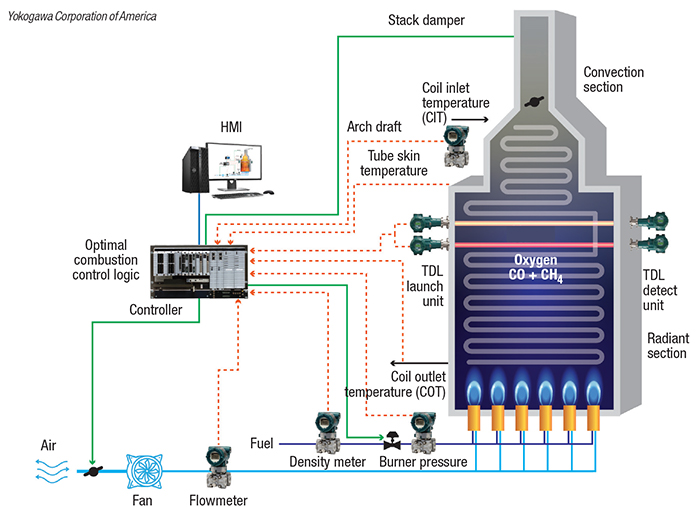 Figure 4. CombustionONE is a comprehensive and collaborative approach to fired asset management that includes an engineering analysis of the fired asset and the resolution of performance and safety issues by the strategic application of hardware, software and turnkey project services with a quantifiable return on investment

Burner Technologies and Concepts: Meeting Emissions-Reduction Goals
To meet bold sustainability targets, new burner technologies and control configurations are being developed to help significantly reduce NOx emissions…
A step closer to transition-metal catalysis with aluminum
Chemists from the Institute of Inorganic and Analytical Chemistry at the University of Freiburg (Germany; uni-freiburg.de) have synthesized a cationic,…
A ‘liquid’ platinum catalyst outperforms solids at low temperature
Platinum is widely used for many catalytic reactions, and because the precious metal is so expensive, efforts have been ongoing…
Iron catalyst shows promise for improving economics of metathesis reactions
The olefin metathesis reaction produces new carbon-carbon double bonds by swapping the carbon atoms in olefins, and is important for…
New catalyst geometry poised to re-shape ethanol-to-ethylene conversion
As chemical manufacturers continue to seek renewable alternatives for fossil-fuel feedstocks, bio-based ethanol is poised to be a crucial raw…