Non-Invasive Temperature Measurement in the CPI

While thermowells have become well-established, they have potential drawbacks that can affect their performance. The benefits of alternative non-invasive temperature sensing is presented here

Temperature is one of the most important parameters for industrial processes, providing a key indicator of system safety, product quality and overall process efficiency, as well as equipping operators with the information they need to ensure their plant is running at optimum performance. As such, temperature should ideally be measured as widely as possible to provide the best possible overview of process conditions.

This article discusses the limitations of conventional thermowell technology and how non-invasive temperature measurement has advanced to become a cost-competitive alternative.

In the chemical process industries (CPI), thermowells are often selected as the preferred method for temperature measurement. Essentially metal sheaths that protect the measurement sensor against the process being measured, thermowells have become commonplace throughout the CPI, being used in everything from food-and-beverage through to oil-and-gas processing. While thermowells can be effective in protecting the temperature sensor, their use is not without problems. 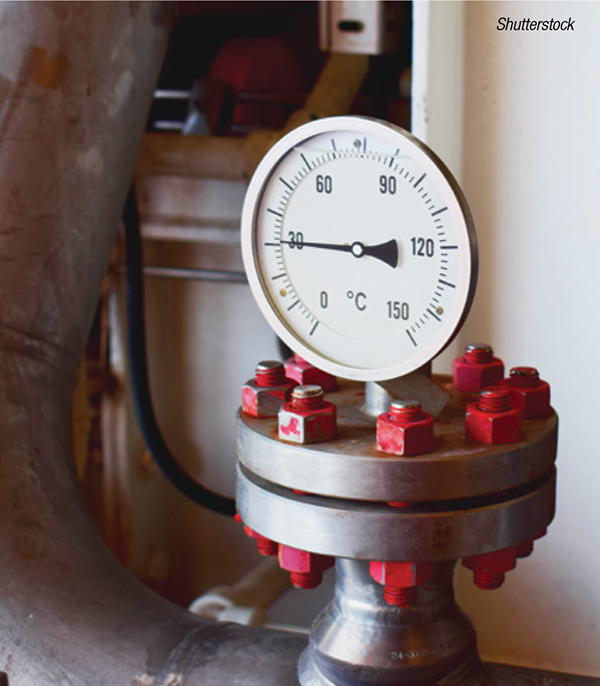 FIGURE 1. Thermowells require boring a hole in the pipe and bolted flanges to support the temperature sensor

Foremost among these problems is the need for them to be in physical contact with the process medium, which means first shutting down the pipeline and then drilling a hole through which the probe can be inserted (Figure 1). This may also require the addition of flanges or fittings to help maintain pipeline integrity and satisfy safety requirements. While these devices have typically offered accurate and reliable performance, the time, cost and disruption associated with their installation has tended to limit the widespread measurement of temperature in a process.

Aside from cost and time, the installation of thermowells can also pose safety risks, especially in applications where liquids may be flowing at high speeds, high pressures or both, which could cause injury if the pipeline is not properly shut down.

Another challenge has been the potential complications arising from the characteristics of the medium being measured. Substances can be liquid, gaseous or in viscous or semi-viscous states, or, in some cases, a combination of these, flowing at different rates. These substances can vary in their characteristics, ranging from benign liquids, such as water, to aggressive chemicals or abrasive mixtures. In each case, the design of the temperature device used needs to be able to withstand the rigors of the application to provide reliable and safe operation.

Where thermowells are used to protect temperature sensors, they must also be designed for the characteristics of the medium being measured to help safeguard the temperature sensor against chemical and mechanical stress. An example is abrasive components suspended in a process. When moving through piping at high speeds, abrasive particles can subject the thermowell to scouring that can reduce its operational life over a prolonged period. While using special thermowell materials can help to tackle this, it can also add substantially to the overall price tag. To protect against the effects of abrasive and chemically aggressive media, thermowells must be regularly inspected and replaced if necessary.

To avoid problems such as premature wear and potential failure, thermowells must be regularly inspected and replaced if necessary, adding to the costs. These inspections require at least a partial shutdown, usually requiring complete emptying of the system. Thermowells also need to be cleaned, which can incur further costs, including those resulting from having the pipeline shut down while the probe is removed.

In addition to increased costs, using thermowells can also have safety implications. A thermowell placed in flowing media, for instance, can begin to vibrate due to vortex formation. In extreme cases, this vibration can lead to the thermowell breaking, which can have dramatic consequences, not only for the system, but also for the whole operating environment.

Consequently, the standards governing the stability of thermowells, such as ASME PTC 19.3 TW-2016, have become ever more restrictive, increasing engineering costs and restricting the ability to use conventional thermowells in some cases.

FIGURE 2. Unlike thermowells, non-invasive temperature sensors are mounted outside the pipe, so there are no issues related to contact with the fluid inside the pipe

Given these factors, it may come as a relief to know that a thermowell may not even be necessary in many cases, due to non-invasive sensor technology (Figure 2).

To understand how non-invasive temperature measurement technology works, it is necessary to first understand the physics of a typical pipe line where a liquid or liquid-like mixture is flowing. The behavior of a flow in a pipeline is known as the flow profile. There are three main categories of flow profile, each related to the velocity of the liquid. These categories are termed as laminar, transitional and turbulent.

Laminar flows occur at stable, low flowrates, with the fluid moving in the same direction at a constant speed. The fluid settles into streamlined tiers, which are prevented from moving by the viscous forces within the liquid, and the flow velocity increases in a well-known parabolic profile from the wall to the center of the cross section, with a relatively distinct boundary layer.

Transitional flows occur when the increased velocity of the fluid causes distortions in the flow, leading the tiers within the fluid to become mixed. This mixing causes the flow to show both laminar and turbulent characteristics at different points in the pipeline.

Turbulent flow occurs at faster flowrates, where eddies and whorls cause mass distortions by forming their own separate sub-distortions. These mass distortions cause the tiers within the fluid to blend. The resulting average velocity profile is constant across the majority of the cross section with a very small boundary layer thickness.

In a simplistic manner, the temperature difference across the cross section of the fluid follows the general flow profile. The difference between the bulk fluid temperature and the inner wall of the pipe is largely determined by the boundary layer thickness.

Engineering tools that can be used to calculate the temperature difference between the surface and the medium are now available [ 1]. Advanced features enable factors such as the effect of flow, density viscosity, pipe diameter and even ambient effects to be included to help determine how good a surface measurement can be.

The benefits of non-invasive

Devices to measure the surface temperature piping are not new. So-called “skin temperature” sensors, for example, which measure the temperature at the pipe wall, have been available for a while. These devices typically employ either thermocouples or resistance temperature detectors (RTDs) that can be mounted on the pipe surface. While these can be effective, their performance tends to be hampered by poor design, poor location, or bad installation, reducing their accuracy and response times. If not properly insulated, they can also be sensitive to ambient conditions that can affect their measurement accuracy. Improving performance also dictates a mounting along the pipe under the insulation. In contrast to thermowells, this can make it even more difficult and costly to investigate or replace sensors in the field.

Achieving a true surface measurement calls for something that can factor out the potential errors that can affect the temperature reading and some means of being able to simplify mounting and maintenance of the sensors. This is now possible with the latest generation of surface-mounted temperature-measurement technology. One commercial non-invasive temperature solution, for example, uses the same sensor and transmitter technology as in a thermowell installation, but with a model-based approach that digitalizes the actual thermowell itself. 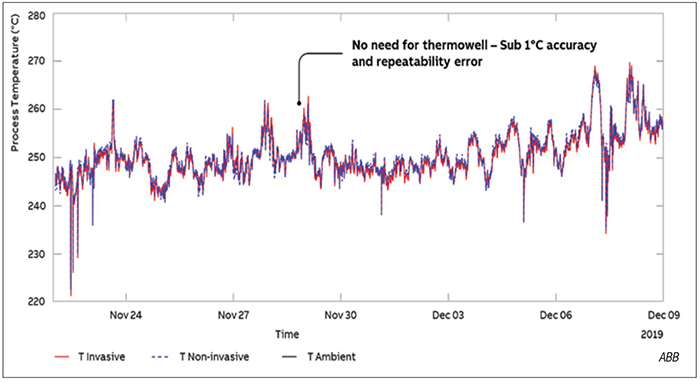 The effectiveness of this technique compared to a conventional thermowell has been demonstrated in thousands of installations across the world. The availability of performance-prediction models show the efficacy of the principle for measuring a wide variety of processes. From simple auxiliary fluids like cooling-water monitoring on heat exchangers to high-temperature, high-pressure steam measurements (Figure 3), the use of the non-invasive sensing is broken down into two simple steps. The first is to check the expected performance of a surface measurement using online prediction tools (input common process parameters such as flow, density, viscosity and so on). If the difference is applicable and acceptable, the second step is to use an accurate, repeatable, robust measurement device that compensates for common errors in surface measurements.

Save time and cost

The advantages offered by this new generation of non-invasive temperature sensor offers the potential for significant cost savings compared to a classic thermowell installation. Savings of at least 30% can be achieved by either minimizing or eliminating much of the time and effort required to plan, design and install a conventional invasive temperature sensor (Figure 4). 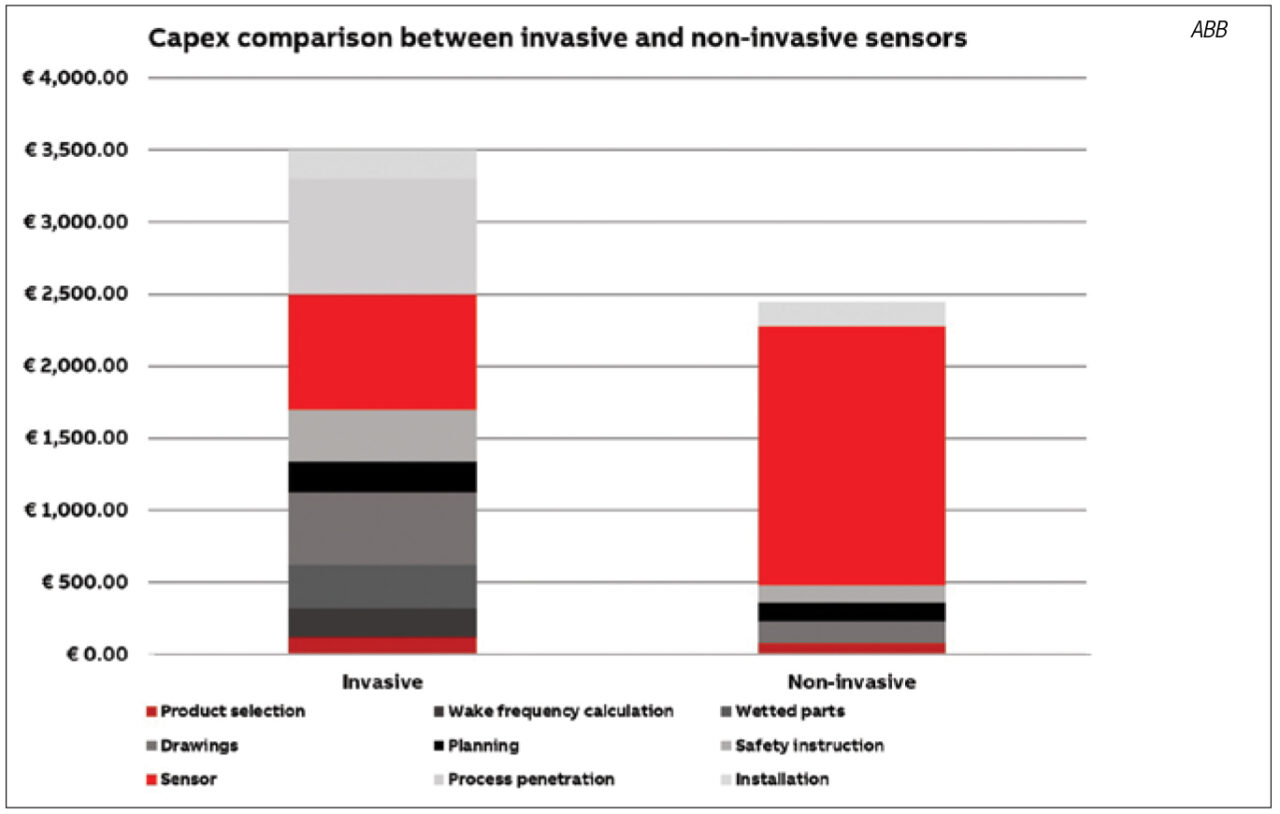 FIGURE 4. New-generation non-invasive temperature sensors can achieve cost savings of at least 30% by either minimizing or eliminating much of the time and effort required to plan, design and install a classic thermowell instalation

Much of this can be attributed to the easy-fit nature of the sensor. The sensor is designed to be mounted on the surface of a pipe, avoiding the time, cost and disruption involved in fitting a conventional temperature sensor. There is no need to drill into the pipelines, because the sensor is attached to the pipe by two clamp collars. This installation arrangement also helps to reduce the amount of insulation needed, with just the foot of the device needing to be covered. As a result, the sensor can typically be installed in under an hour, enabling operators to quickly get up and running.

There is also little of the work associated with specifying and installing a thermowell, which can often take several weeks from start to finish. One major area that is eliminated is the need to carry out wake frequency calculations, which are needed for invasive installations to assess the design of the thermowell device including its size and the type of material needed to withstand the impact of the process medium. The need for such calculations, together with the associated process adjustments, can typically increase the total price tag of thermowells by two to three times over and above their material cost.

While temperature may be one of the oldest process measurements, it doesn’t follow that the way that it is measured must stay the same. When it comes to temperature, the conventional approach to measurement is increasingly being challenged by the new possibilities that digitalization is bringing to all areas of industrial measurement.

Advances in temperature measurement technology, particularly when it comes to digitalization, are presenting new opportunities for disruption that can benefit the vast majority of companies operating processes with turbulent flows. By switching from analog to digital, companies can benefit from the integration and application of process data across the plant, enabling them to make informed decisions on everything from plant operation through to maintenance.

Going forward, developments in non-invasive temperature measurement will enable companies to transform their ability to measure an expanding range of flow regimes and fluids with more complex heat-transfer behavior, such as gases, with the same levels of accuracy, reliability and responsiveness as themowells.

Guruprasad Sosale is the global product manager for non-invasive and wireless technologies at the ABB’s business unit Measurement & Analysis Technology (Landsberger Strasse 320, Munich, Germany 80687; Phone: +49-89-58005-0). Prior to assuming this role in October 2022, he was senior scientist, Industrial Sensing Technology, at ABB’s Corporate Research Center in Ladenburg, Germany. The focus of his R&D activities were wireless and autonomous sensors, and then non-invasive sensor technology, which also includes temperature measurement using ABB’s NiTemp. He was part of the NiTemp development team and now has the role of bringing this technology to market. Sosale earned his Ph.D., M.Eng. and B.Eng. degrees in mechanical engineering from McGill University (Montréal, Canada).