In designing and sizing relief-device and effluent-handling systems, one commonly overlooked aspect of the performance is examining the potential for low temperatures that can cause the components of the system to reach temperatures below their respective, minimum-design metal temperatures (MDMT), which may result in brittle fracture with subsequent loss of containment. This article points out limitations of the typical overpressure-protection-analysis philosophy, discusses common sources of low temperatures for further investigation, and addresses possible design remedies for MDMT concerns. The primary objectives of a process engineering evaluation of an effluent handling system (such as a flare system) include ensuring that operation of the pressure relief devices discharging into the collection system (flare headers, for example) is not adversely affected; and that the effluent handling equipment are properly designed to perform safely. The results of an overpressure-protection design are the primary input for this engineering evaluation; however, there are several potential gaps in the ability of these data to identify situations in which the MDMT may be exceeded.

Common practices for pressure relief and effluent handling are found in numerous references [ 1–5]. The processes for estimating a discharge temperature and performing the outlet pressure-drop calculations in the pressure-relief-device discharge piping are limited in their ability to accurately predict flowing temperatures for many situations. First, the discharge calculations are quite often only performed for the controlling contingency for which the pressure relief device was sized, which does not necessarily represent the most likely cause of overpressure or the cause resulting in the lowest discharge temperatures. Second, the outlet pressure-drop calculations for individual pressure relief valves consider the outlet discharge piping and potentially exclude the remaining, downstream piping system. This practice can result in a temperature discontinuity between the calculated discharge temperature for the individual relief device and that calculated for the same section of piping considering the entire downstream piping system using an effluent-handling hydraulic model. Third, the temperature estimates are typically made for isothermal pressure-drop equations and do not account for effects like retrograde condensation. Fourth, some simplifications of the calculations that are used for the purposes of estimating the outlet pressure drop do not represent flashing effects (for example, highly subcooled flashing liquids are often choked at the bubblepoint; therefore, the sizing of the valve may assume the backpressure is at the bubblepoint). Finally, the temperature estimates tend to be based on either relieving temperatures or isenthalpic flashes from relief conditions, which do not account for kinetic energy effects. These effects can be substantial if the developed velocity in the outlet piping is high and can be compounded when there are multiple relief devices discharging simultaneously into a collection system, or when large diameter differences exist between the tail-pipe and the main effluent header. 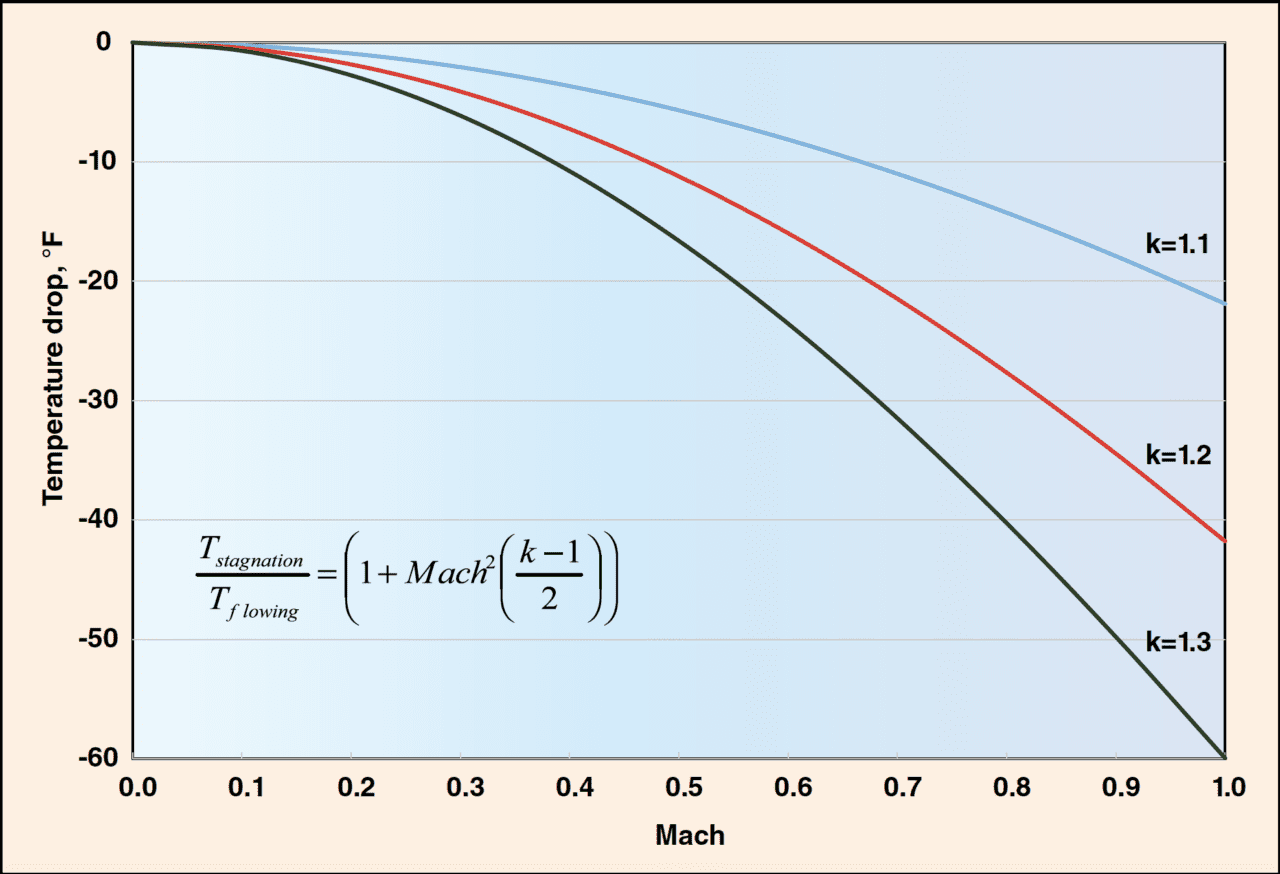 Figure 1. Temperature drop relative to stagnation as a result of flowing

Additional limitations. Additional gaps in the overpressure protection analysis include the common practice of not considering the potential for pressure relief valves to leak, or the effects of other inputs to the effluent handling system (such as pressure control valves, depressuring valves, pump seals and manual purge valves). A leaking pressure-relief valve is typically considered an operational and mechanical issue, not a cause of overpressure that needs to be evaluated for the sizing of the pressure relief valve or for the effects on the downstream collection system; however, many of us in the warm Gulf Coast region of the U.S. recognize an ice-covering as indicative of a leaking valve, and the fluids used in the evaluation of the pressure-relief-device sizing may not be representative of the normal process fluid (for example, the external fire case, which is a common design basis). Pressure control valves may also be called upon to “relieve” fluids, yet are commonly not accounted for in overpressure protection studies based on the desire to not include the positive response of control systems in preventing overpressure. In actual situations, the basic process-control systems are expected to function as intended, and thus represent a more likely source of fluid input to the collection system. In addition, these control valves are not necessarily sized to handle the full flow of an overpressure scenario, resulting in flow from both the control valve and the pressure relief valve, thereby exacerbating velocity effects. Finally, depressuring is a dynamic process, releasing fluids of different pressures and temperatures as a function of time. Considering the most likely behavior of a depressuring system to be an isentropic expansion of the residing fluid, the inlet fluid temperatures can drop significantly as the depressuring progresses.

Design considerations. Based on recent evaluations of several natural-gas processing facilities with ethane recovery capabilities, the authors have identified several common areas of concern that may provide a starting point for other gas processors’ investigations into this aspect of collection system design, as well as for process piping. These areas include the following: multiple inputs (such as pressure relief devices or control valves) discharging into subheaders having diameters close in size to the individual discharge piping diameter; flashing liquid relief (unstablized condensate, natural gas liquids [NGL] or liquid propane); internal-boundary-failure cases (tube rupture, for example) in gas chillers; cryogenic drain operations (such as draining expander casing for maintenance); pressure-relief-device MDMT specifications not commensurate with discharge piping MDMT; and pressure relief devices or vents on the outlet of cryogenic cold-box sections where the normal process fluid is at elevated temperatures, yet during process upsets may experience significantly lower temperatures. Figure 2 provides an overview of these common areas of concern related to low flowing temperatures. NGL and propane processing-and-storage equipment are examples of commonly overlooked systems that can achieve low flowing-discharge temperatures. These equipment usually have pressure relief devices that are sized based on an external fire case, yet also have the potential for relieving the liquid either due to blocked discharges, leaking relief valves or depressuring. 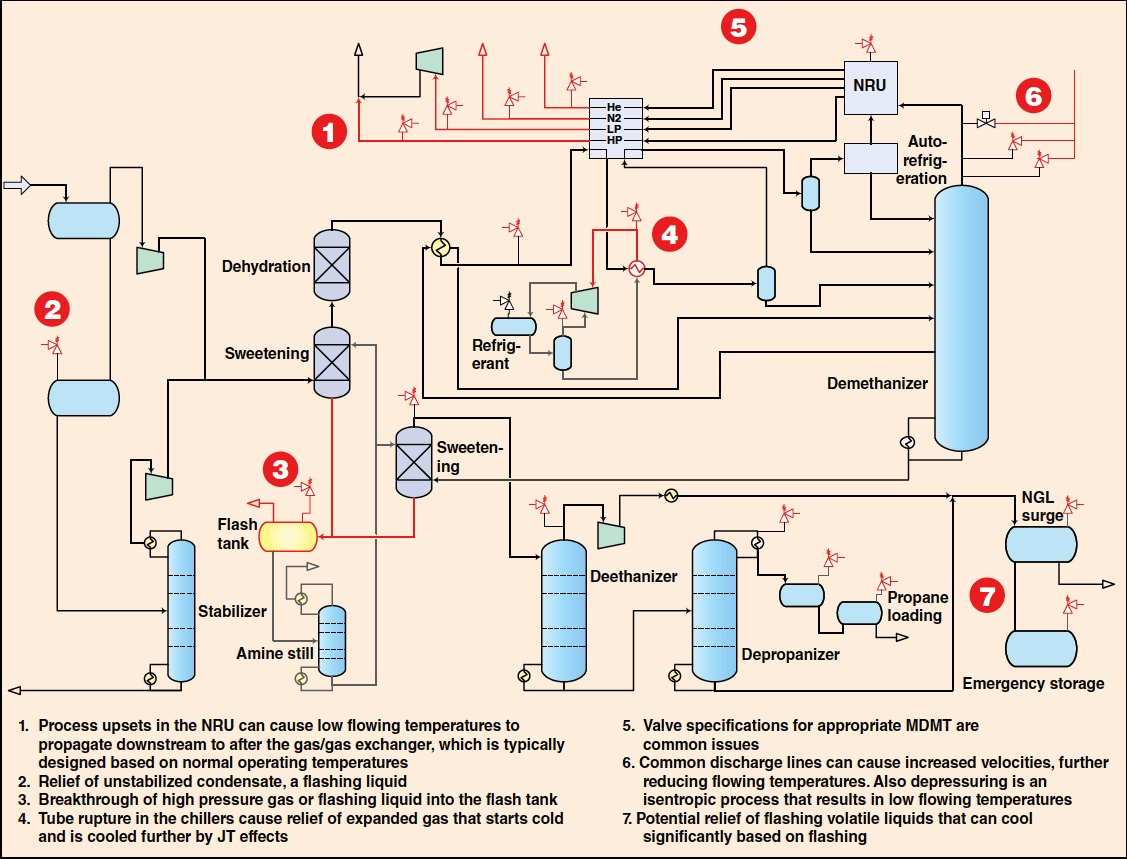 Alternative solutions. While the design issues related to low flowing temperatures can be dealt with by specifying appropriate metallurgy, there are other alternatives for consideration. These alternatives can include identifying ways to eliminate the cause of overpressure in the first place (for example, prevention of overfilling of vessels), mitigation of relieving conditions causing the low temperature excursion via safety instrumented systems (SIS), performing mechanical stress analyses to establish a better estimate of the MDMT per ASME B31.3 (with replacement of components not covered by stress analysis as needed), adding supplemental fluid (such as gas or methanol) to raise the stagnation temperature, rerouting the discharge to a different location (such as to the atmosphere), or conducting Charpy testing on the piping in question to establish the actual MDMT. For potentially leaking pressure-relief valves, the options also include recognizing the additional consequences in a risk-based inspection protocol, installing rupture disks, or adding skin thermocouples and low temperature alarms on the discharge piping to notify personnel of leakage before the MDMT is crossed.

In summary, established overpressure-protection-analysis philosophies are not well suited to identify possible material concerns as a result of process fluid flashing and depressuring. Relief-device and effluent-handling sizing conventions and simplified calculation methodologies limit the ability of the designer to recognize potential MDMT concerns. Understanding the inherent limitations of current overpressure-protection-analysis practice is key to developing a more robust overpressure protection analysis heuristic, which more fully recognizes the effects of low temperature flashing on material design. It is the experience of the authors that modification of the typical overpressure-protection-analysis philosophy to identify and propose alternative solutions for conditions resulting in excursions beyond MDMT is prudent in promotion of enhanced facility process-safety management.

The views in this paper are entirely the authors and do not necessarily reflect the views of BP America Production Co. or its affiliates.

4. Coats, and others, “Guidelines for Pressure Relieving Systems and Effluent Handling”, 1st Ed., Center for Chemical Process Safety of the American Institute of Chemical Engineers, 1998.

Aubry Shackelford is a principal engineer for Inglenook Engineering, Inc., which provides process engineering consulting with a specific focus on process safety management (15306 Amesbury Lane, Sugar Land, TX 77478; Email: aubry@inglenookeng.com; Phone: 713-805-8277). He holds a B.S.Ch.E. from Northeastern University and is a professional engineer licensed in the state of Texas and the province of Alberta (Canada).

Brian Pack is the area engineering-support team leader for the Mid-Continent operations area in North America gas region for BP America Production Co. (501 Westlake Park Blvd., Houston, TX 77079; Email: brian.pack@bp.com; Phone: 281-366-1604). He holds a B.S.Ch.E. from the University of Oklahoma and is a professional engineer licensed in the states of Texas and Oklahoma.

Focus on Valves
Rotary valve controls the flow of powders and granules The Coperion ZRD Heavy-Duty Premium rotary valve (photo) is designed for…
Reactive Chemistry in the CPI
Reactive chemicals and intermediates are used extensively in the chemical process industries (CPI). Hazardous chemical reactivity can be defined as…
Rupture discs now available in Iconel
This company has expanded its Atlas rupture-disc product line to include Inconel 625 material of construction. The material will now…
Install these rupture discs where atmospheric discharge occurs
The WMP (welded muffled plug) rupture-disc assembly is a single-use unit that is threaded into a pressure system. Designed to…
Runaway Reactions: Ignore the Chemistry at Your Peril
Click here for full pdf version of this article - includes all graphs, charts, tables, and author information