A desalination process that pumps ions instead of water
Researchers from Indonesia’s Bogor Agricultural University (Bogor, Indonesia; www.ipb.ac.id), the…

Chementator Briefs
Li2CO3 from brine Purities of greater than 99.9% for battery-quality…

Handle heavy slurries with this portable pump unit
The SludgeKat is a self-priming, positive-displacement, hydraulic-piston pump (photo) that… 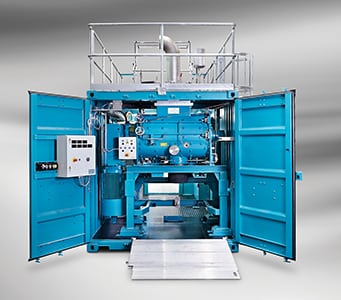 A mobile version of this company’s FKM 600 ploughshare mixer, dubbed Mixer in the Box (photo), was specially designed for users in heavy-duty industries, providing the ability to perform practical wear tests directly on their premises. Completely mobile and installed in a 40-ft standard container, the fully assembled machine has a drum volume of 600 L. Suitable for mixing heavy and coarse products, the Mixer in the Box is constructed of highly durable materials with a replaceable rubber lining to protect the cylindrical container and front plates from wear. The mixing mechanism itself has shovel armor plating made of tungsten carbide, which significantly increases service life. — Gebr. Lödige Maschinenbau GmbH, Paderborn, Germany