A catalytic process to selectively break carbon-carbon bonds within the polymer chains of polyethylene and polypropylene could allow the use of waste plastics to make biodegradable surfactant molecules. Researchers led by the Institute for Cooperative Upcycling of Plastics (iCOUP) at the U.S. Department of Energy’s Ames National Laboratory (Ames, Iowa; www.ameslab.gov) developed the process, which catalytically cleaves polymer chains into shorter units by introducing organo-aluminum end groups. The scientists can then functionalize these end groups to make biodegradable fatty alcohols, carboxylic acids or other derivatives. 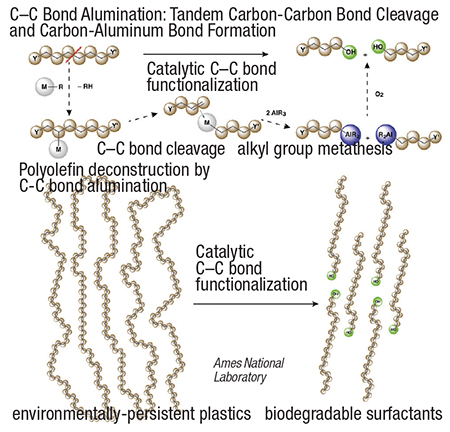 The transformation (diagram) is enabled by C–H bond activation and ß-alkyl elimination reactions, in which a silica-supported zirconium catalyst forms a metal-alkyl intermediate that breaks C–C bonds within the polymer chain. Then, the complex is treated with tri-alkyl aluminum, forming shorter chain fragments with a triethylaluminum or tributylaluminum group at one end. The carboaluminum species can be derivatized using oxygen or other reagents to make fatty alcohols or carboxylic acids.

“Using Zr catalysts that are dispersed on a silica surface, we can essentially reverse the mechanism used to polymerize olefins into plastics — instead of forming new C–C bonds, we are cleaving them,” explains Aaron Sadow, iCOUP director. “The alkyl-aluminum species that are formed allow upcycling of waste plastics, because they can be functionalized using known methods.”

A technoeconomic analysis conducted at Argonne National Laboratory suggests the costs of producing fatty alcohols from waste plastic would be comparable to conventional synthesis of these molecules. At iCOUP, fatty alcohols have been synthesized using polyethylene shopping bags with no pre-treatment.

The research team is exploring how the design of the catalyst and support can be used to control the distribution of chain lengths in the fatty alcohol products. “We are trying to figure out how to maximize yields of C10–C20 chain lengths, because there is an existing market for those,” Sadow says, “But there also could be new markets in the future for longer-chains, like C30s, because you could produce them from waste plastic at costs similar to conventionally made C12 chains, for example.”