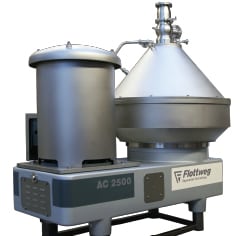 To be introduced next month at Brau Beviale 2012 (Nuremberg, Germany; November 13–15), the AC2500 beer clarifier processes up to 600 hL/h of beer, making it suitable for big breweries. The AC2500 can be used flexibly for pre-clarification before filtration, green-beer clarification and for turbidity adjustment in the case of cloudy beer, such as wheat beer. Like its smaller predecessors, the AC2500 features the SoftShot bowl discharge system, in which yeast is separated from beer and collected in the solids chamber of the bowl. The system automatically recognizes, by turbidity monitoring, when the bowl is completely full. The feed system, valves and discharge system have been optimized to minimize the impact of shear forces. — Flottweg SE, Vilsbiburg, Germany

Related Content
Facts at your Fingertips: Centrifuge Separation Capacity
This one-page reference describes how to measure the capability of a given centrifuge to separate solids from a liquid phase.…
New disc technology boosts centrifuge separation capacity
UniDisc (photo) is this company’s latest innovation for disc stack separators. This new disc technology is said to increase separation…
Launch of a new generation of decanter centrifuges
This new generation of decanter centrifuges (photo) will complement this company’s existing A-series for industrial, F-series for food and D-series…
This high-speed separator also discharges quietly
The AC separator (photo) is said to reach far higher speeds than other centrifuges, such as the decanter centrifuge. The…
A new decanter for smaller- scale sludge dewatering
The C2E decanter centrifuge (photo) was developed specifically for the dewatering and thickening of smaller sludge burdens. The machine consists…