During my career, I have seen several massive centrifugal pump failures caused by pump users attempting to operate pumps in parallel without the proper equipment review, procedural review or instrumentation. Parallel pump operation happens when two centrifugal pumps are installed side by side with common suction and discharge headers (Figures 1 and 2). In an ideal scenario, if both pumps have essentially identical head flow characteristics, then each pump should contribute equally to the total flow going into the discharge header, barring any unexpected line restrictions. However, problems often arise when operators assume that both that the pumps are identical in head, and that flow characteristics and flows will remain similar throughout the pumps’ lifetimes. 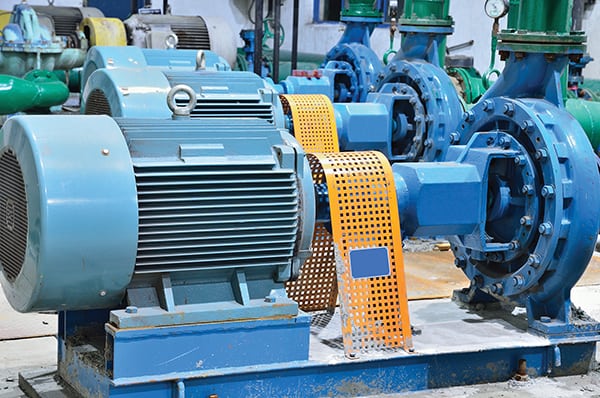 Figure 1. When parallel pumps are installed and operated in parallel, individual pump flows are additive, but pump heads are not. Problems often arise when operators assume the pumps are identical in head and flow characteristics and that flows will remain similar throughout the pumps’ lifetimes 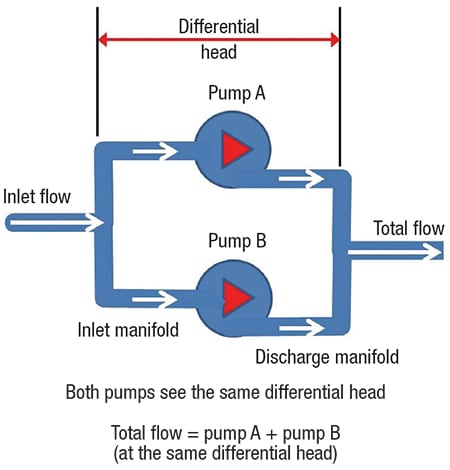 If these pumps have best efficiency point (BEP) flows of 400 gal/min, then the first pump is running at 75% of its BEP flow, and the second pump is operating at 78.8% of its BEP flow. This example probably represents a typical situation in which pumps provide similar head flow characteristics to the job at hand.

When centrifugal pumps are operated in parallel, individual pump flows are additive, while pump heads are not. After studying Figure 3, the reader will surmise that, when operated in parallel, individual pump flows add to the right of the head-flow curves while the head that each pumps experiences remains the same. For example, as shown in Figure 3, at a value of about 288 ft of head, each pump delivers about 400 gal/min, yielding a total combined flow of 800 gal/min. Remember that this example assumes identical pumps are piped in parallel — which is rarely the case in the real world. 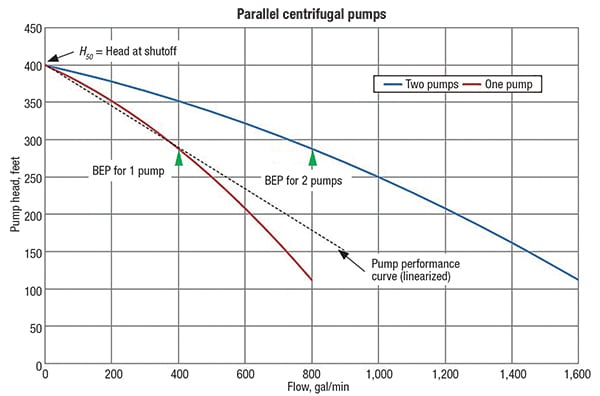 Figure 3. Shown here are performance curves where pump head is plotted against flow for a single centrifugal pump, and for two identical centrifugal pumps operating in parallel

Now, let’s look at a situation where one of the pumps operating in parallel has some wear. For example, Figure 4 shows the pump curves for a healthy and a worn pump on a single plot. For simplification, the pump curves have been linearized. As seen in Figure 4, the worn pump produces less head at all flows. As the wear becomes more and more severe, there will be a flow value where the healthy pump will completely overcome the worn pump and cause its flow to drop to zero.

A zero-flow condition occurs because, even at shut-in flow conditions, the weaker pump can no longer generate sufficient head pressure to overcome the discharge header pressure and open its discharge check valve. It goes without saying that zero flow is very bad for centrifugal pumps.

It has been well-documented in the literature that operating centrifugal pumps at low-flow conditions relative to their BEP can lead to excessive vibration, pressure pulsations, accelerated bearing and seal wear, and rapid internal heating. We also know that prolonged operation of centrifugal pumps at very low or zero flow can lead to rapid catastrophic failures, which can result in expensive pump repairs, product releases and fires.

Looking at the upper left of the two curves in Figure 5, one can imagine a triangle comprised of the healthy pump curve, a horizontal line that intersects the pump head axis at the location of the worn pump shut-off head ( H so), and the pump head axis (the ordinate). The orange oval shown in Figure 5 highlights a closeup of the low-flow regions of the performance curves. 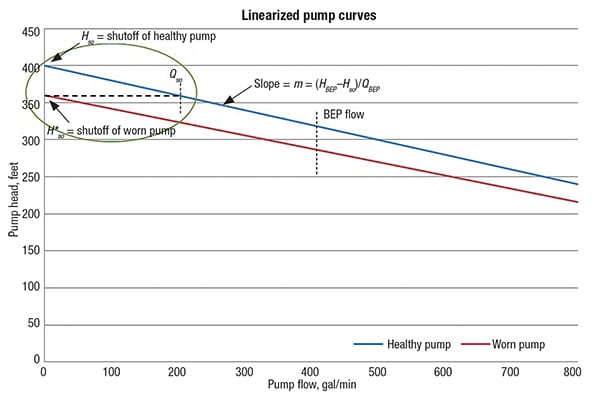 By observation, the slope of the healthy pump curve can be written as follows:

Here we assume the pump curve is fairly flat and can be reasonably estimated by a straight line, where:

By inspection, we can write the following relationship to define the “pump shut-off triangle”:

H * so = Head at shutoff of the degraded pump

Setting these two equations equal to the slope m, we arrive at the following:

If we solve the new relationship for Q so /Q BEP we get:

The term Q so /Q BEP is the flow ratio that will result in the shutoff of the degraded pump.

We will run through a few examples to better understand the value of this new equation.

Example 1. Let’s assume that one of the pumps is 100% healthy and the sister pump has degraded to the point where it is producing only 90% of its original head. After doing some research, you find that the ratio of the head at BEP and shut-off head ( H BEP /H so) is 0.8. If we plug this information into the Q so /Q BEP equation we get the following:

The result means that for this set of conditions we can expect the “weaker” pump to experience a shutoff condition when the “healthier” pump reaches a flow of 50% of its BEP.

Example 2. Now, let’s assume that one of the pumps is 100% healthy and the sister pump has degraded to the point where it is producing only 95% of its original head. After doing some research, you determine that the ratio of the head at BEP and shutoff head ( H BEP /H so) is 0.85. If we plug this information into the Q so /Q BEP equation we get the following:

In this example, we see that we can drop the flow on the “healthy” pump down to 33.3% of the BEP flow before a shutoff flow conditions is experienced.

Example 3. Finally, let’s assume that one of the pumps is 100% healthy and the sister pump has degraded to the point where it is producing only 95% of its original head. After doing some research, you find that the ratio of the head at BEP and shutoff head ( H BEP /H SO) is 0.7. The reader will notice that the Q SO /Q BEP ratio is much lower in this example, which means that this pump curve has a higher head rise to shutoff. If we plug this information into the Q so /Q BEP equation we get:

Notice that when there is a larger head to rise to shutoff, a lower “healthy” pump flow can be tolerated before a shutoff condition is reached. The converse to this statement is that pumps with flat head-flow curves are much more sensitive to flow imbalance when internal wear occurs.

When multiple pumps are run in parallel, there is a very real likelihood of experiencing imbalanced flows during the course of their operation. Pump manufacturing differences, internal pump wear, large swings in process conditions, internal pluggage and asymmetrical piping designs can all contribute to unbalanced pump flows. No matter how hard you try, there will always be a possibility that a laggard pump could one day crash if performance degradation goes unnoticed before a shut-in condition occurs. The safest philosophy is to assume there will always be some level of pump flow imbalance, so operators should continuously monitor individual pump flows as a means of avoiding catastrophic low-flow conditions.

Here are some guidelines for designing parallel pump installations:

The thoughtful design and careful installation of a parallel pumping system (Figure 6) will greatly increase the chances of reliable operation for years. Remember to train operators to treat parallel pumps with extra care and to keep an eye out for signs of early trouble, such as increased vibration or pressure pulsation levels. Plant personnel are the eyes and ears of your organization. n 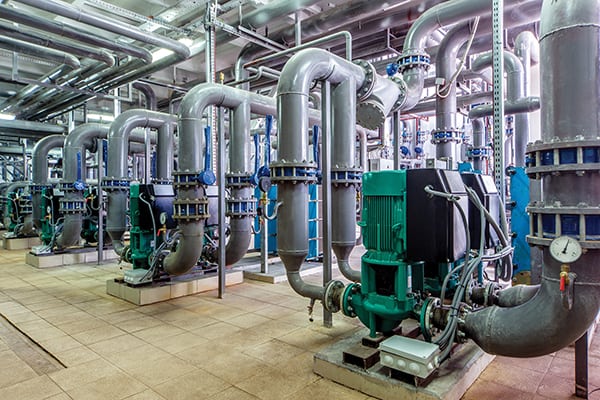 Robert X. Perez is currently employed by a pipeline company in San Antonio, Tex. (Email: rxperez@pumpcalcs.com; Phone: 210-262-3298). He has more than 30 years of rotating equipment experience in the petrochemical industry. He earned a B.S.M.E. degree from Texas A&M University (College Station), a M.S.M.E. degree from the University of Texas at Austin, and is a licensed professional engineer in the state of Texas. Perez served as an adjunct professor at Texas A&M University-Corpus Christi, where he developed and taught the Engineering Technology Rotating Equipment course. Perez has authored four books (including Ref. 1 and 2), and coauthored four books in the field of machinery reliability. Perez has also written numerous machinery reliability articles for technical conferences and magazines.