Facts at your Fingertips: Removal of Particulate Matter from Industrial Processes

Particle loading in the fluegas from any industrial process is measured in grains/dry std. ft3 (grains/dscf) or mg/dry std. m3 (mg/dscm) or mg/normal m3. The particle loading in the gas will vary widely depending upon a number of factors, including the gas velocity, particle size, particle density and the nature of the upstream process and feedstock. The smaller the particle, the more easily it is carried by the fluegas, even at relatively low gas velocity. As the gas velocity increases, larger particles can be carried by the fluegas stream, and the number of particles of all sizes that can be carried increases.

Electrostatic precipitators (ESPs). ESPs use static electricity to remove soot (carbon from incomplete combustion) and ash from exhaust gas. Dirty gas is passed between two sets of electrodes in the form of metal plates, wires or bars. One electrode is charged with a negative voltage, which imparts a negative charge to solid particles being carried in the exhaust. A second set of electrodes is positively charged, and attracts the negatively charged pollutant particles, separating them from the exhaust gas stream. In a dry ESP, the removed particulate matter builds up on a collector surface, and is removed by mechanical vibration. In a wet ESP, the collecting electrodes are sprayed with water to remove the solid pollutants.

Wet scrubber.Wet scrubbers remove pollutants primarily through the impaction, diffusion, interception or absorption of the pollutant (either particulate matter or acid gases) onto droplets of liquid. The liquid containing the pollutant is then collected for disposal. An ionizing wet scrubber (IWS) combines the concepts of the ESP and the wet scrubber.

Venturi scrubbers. Venturi scrubbers are a type of wet scrubber that uses high-velocity streams of exhaust gas and water to atomize the liquid into fine droplets, which capture small particulate matter. Intensive mixing of the gas and liquid occurs in the throat of the venturi tube. The solid pollutant material is collected along with the liquid, while the cleaned gas escapes. With regard to particulate emissions, venturis tend to have limited ability to remove fine particles, and they experience exponentially higher pressure drops when forced to remove particulate matter. In recent years, with tighter U.S. Environmental Protection Agency (EPA) limits, the use of venturis as a standalone particulate-removal device has fallen out of favor.

Cyclones. Cyclone separators operate by creating a spiraling vortex of dirty gas inside a chamber. Solid particles carried by the gas are forced outward by centrifugal force as they travel around the chamber in a spiral pattern. Particles contact the walls of the cyclone and are collected at the bottom of the chamber, while cleaned gas leaves out of the top of the cyclone chamber. 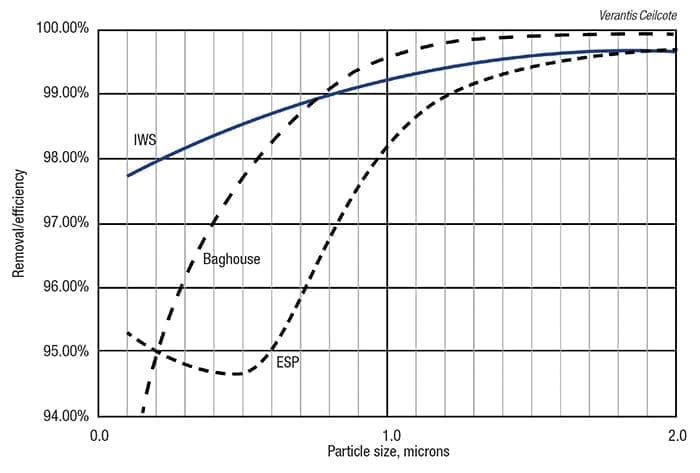 Figure 1. In this graph of particle size versus removal efficiency, three of the most commonly used air-pollution control devices experience a decline in collection efficiency as the particle size of the pollutants falls. This phenomenon is least pronounced for the ionizing wet scrubber (IWS)

Each pollution-control device has its own characteristic operating curve. Figure 1 provides a comparison for an ionizing wet scrubber, filter baghouse and dry ESP. Note that the collection efficiency for all of these devices begins to fall off for smaller particles, with the ionizing wet scrubber having the least-rapid decay of its efficiency curve. Ionizing wet scrubbers are frequently used in series with two or three in a row, in part, to maintain removal efficiency during their required periodic wash cycle (a downstream unit operates while the upstream unit is being washed down).