The CEO of Repsol S.A. (Madrid, Spain),  Josu Jon Imaz, announced two pioneering industrial decarbonization projects that the company will undertake with the participation of prominent Spanish and international partners. The facilities, to be located in the port of Bilbao and its surrounding area as a first option, will represent a combined initial investment of approximately 80 million euros. 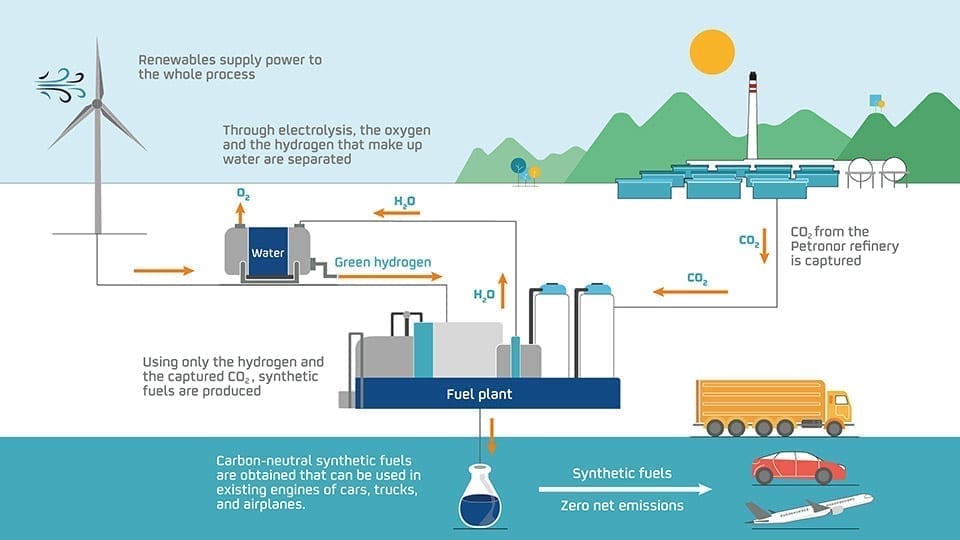 With these projects,  Repsol continues to take decisive steps to lead the energy transition and towards the goal of becoming a net zero emissions company by 2050. The initiative represents a new example of the public-private collaboration needed to address challenges such as the fight against climate change and to promote the value-added industrial sector as one of the keys to achieving a rapid economic recovery.

The first project, in which 60 million euros will initially be invested, involves building one of the largest net zero emissions synthetic fuel production plants in the world, based on green hydrogen generated with renewable energy. The main feature of these new fuels is that they are produced using water and CO2 as the only raw materials. They can be used in the combustion engines that are currently installed in automobiles in Spain and the rest of the world, as well as in airplanes, trucks, and other machinery.

Repsol’s partners include Petronor, one of Spain’s principal industrial centers; and the Energy Agency of the Basque Government (EVE), a public-sector leader in the energy transition.

The facility, which will be fully operational within four years, will set a new benchmark in Europe thanks to the cutting-edge technology applied and the use of CO2 captured in the nearby Petronor refinery. Its development represents a first-order technological challenge that will be led by the Repsol Technology Lab research center. It will combine green hydrogen—a 100% clean energy generated from renewable sources—with CO2 as the raw materials in the process, and it will position Repsol on the leading edge of the development of net zero emissions fuels.

In the first phase, which will be scalable in a later commercial stage depending on the results obtained, 50 barrels of synthetic fuel will be produced per day, with net zero emissions of CO2 in the entire production cycle. Conceptual engineering will begin this year. Petronor is the only refinery in the Iberian Peninsula and one of few in Europe that has integrated the process of capture, storage, and use of CO2, and it is expected to be able to capture the CO2 directly from the air.

The second project, which will be located next to the first one, also with the port of Bilbao and its surrounding area as the priority option, will represent an initial investment of 20 million euros. Led by Petronor, it will consist of a plant for generation of gas from urban waste. The generated gas will be used to replace part of the traditional fuels that the Basque refinery, one of the largest in Spain, currently uses in its production process.

This second initiative aligns with Repsol’s strategy of promoting the circular economy which is applied in many phases of the company’s production cycle through technology and innovation. Repsol has already implemented over 200 projects in this area which it has identified as one of the key levers for achieving net zero emissions by 2050.

In its first stage, this pyrolysis plant will be able to process around 10,000 tons of urban waste a year, and its capacity could be increased in later stages to approximately 100,000 tons a year, equivalent to all the urban waste produced in the surrounding area. 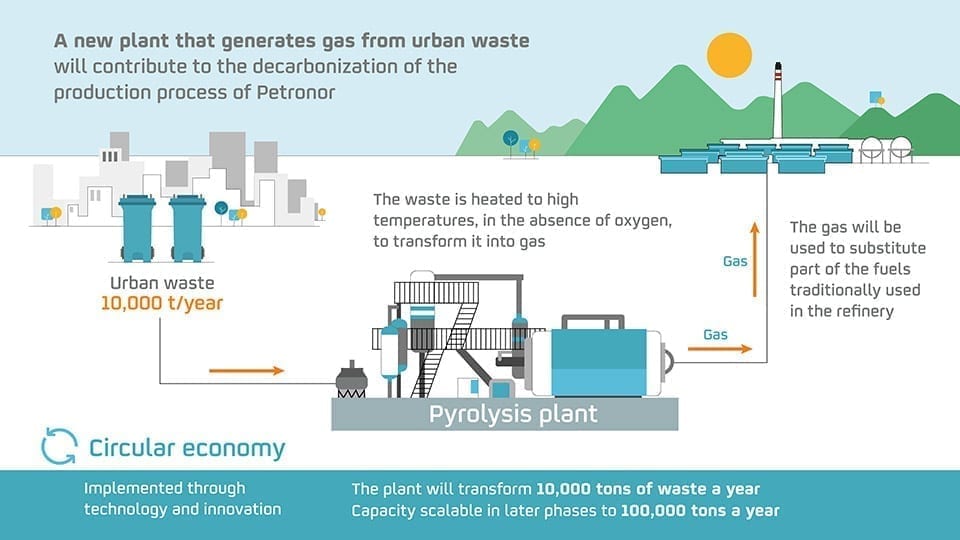 The initiatives presented today will represent a major boost to the technological and industrial developments associated with the decarbonization plans that are vital in the current context of economic recovery and of focus on the sectors that offer greater added value.

According to Josu Jon Imaz, “these projects highlight the importance of maintaining technological neutrality in the search for the alternatives necessary for decarbonization, taking into account all possible technological solutions for achieving success in the fight against climate change, without prejudices, committing to those that contribute to reaching our goals in the most efficient and sustainable way possible and supporting our industry.”

“Spain must base its decarbonization strategy on its technological and industrial capabilities. The production of green hydrogen in combination with the capture and use of CO2 to produce net zero emission fuels is part of the industrial decarbonization strategy of Repsol. With this project, the Spanish industry is positioning itself to become a leading European player in reducing emissions”, said the CEO.

To Imaz, “all forms of decarbonization are valid and complementary, and incentivizing them so that all of them can contribute, without exception, will accelerate the progress of the energy transition while also helping us, as a society, to emerge from the crisis caused by COVID-19 as rapidly as possible.” The CEO of Repsol reaffirmed the company’s commitment to “leading the energy transition even in these times of economic uncertainty in which we also want to strengthen our role as a company that contributes to the country’s industrial development.”

Emiliano López Atxurra, Chairman of Petronor, a company that is part of the Repsol Group, said that “the project unifies three important characteristics in the current situation: a commitment to reduce the carbon footprint and the technological neutrality as a lever; the challenges that the industry and technology are facing in relation to the energy transition; and public-private partnerships as a smart tool to realize an industrial development that will help us consolidate a sustainable welfare society.”

On December 2, last year, Repsol announced that it was orienting its strategy to become a net zero emissions company by 2050, in accordance with the Paris Agreement, making it the first company in its sector to adopt this ambitious goal.

This year, the company will reduce its Carbon Intensity Indicator by 3% with respect to the 2016 benchmark, by reducing CO2 emissions in all businesses and significantly increasing its renewable generation capacity.

In its announcement on December 2 last year, Repsol emphasized the circular economy as a tool for the efficient use of resources and announced that it will double its production of high-quality biofuels from vegetable oils (HVO) to 600,000 tons by 2030, half of which will be produced from waste before 2025.

Repsol has also indicated that it will integrate renewable energy into its refining operations through the production of green hydrogen and the use of electricity of renewable origin in its industrial processes.

Repsol has consolidated itself as an important player in low-carbon power generation. Today it has nearly 3,000 megawatts (MW) in operation and another 2,000 MW under development. Additionally, in 2019, it surpassed the one million electricity and gas customer mark, an increase of 31% since it entered the market, and it has launched innovative solutions for self-consumption and distributed generation.

This past April, the company began construction of its first solar farm, called Kappa and located in the town of Manzanares (Ciudad Real). This facility will have a total installed capacity of 126 MW and represent an investment of 100 million euros. It is expected to begin producing electricity at the beginning of next year.

Kappa is one of seven renewables projects that Repsol is pursuing on the Iberian Peninsula and the second to break ground in Spain. The first was the Delta wind project, located in the provinces of Zaragoza and Teruel, where construction began in December last year and is still ongoing. It will have a total installed capacity of 335 MW, represents an investment of 300 million euros, and is expected to come into operation at the end of this year.

Repsol has been awarded the highest certification – “A” Label – by The National Commission on Markets and Competition (CNMC), in recognition of the environmentally friendly origin of the electricity that it commercializes: 93,5%

Air Products to start construction of second liquid hydrogen plant in Rotterdam
Air Products (Lehigh Valley, Pa.) announced plans to start construction of a second hydrogen liquefaction plant in Rotterdam, the Netherlands.…
KBR and Giammarco-Vetrocoke sign master services agreement for carbon capture technology
KBR Inc. (Houston) announced that it has signed a master license and engineering agreement with Giammarco-Vertrocoke S.R.L. for KBR to…
Brooge Energy and thyssenkrupp Uhde collaborating on green-hydrogen project
Brooge Energy Ltd., an infrastructure provider, announced that it has engaged thyssenkrupp Uhde to undertake the technical study of its…
Schlumberger and Aramco to collaborate on digital decarbonization platform
Schlumberger (Houston) and Aramco (Dhahran, Saudi Arabia) have announced plans to collaborate and develop a digital platform that will provide…
NextChem announces €194-million grant for waste-to-hydrogen project in Rome
Maire Tecnimont S.p.A. (Milan, Italy) announces that its subsidiary NextChem has been assigned a €194 million grant for the development of a waste-to-hydrogen plant as part…