Most chemical processes are born in the laboratory. The challenge for engineers is to then convert the laboratory method into a large and economically sound industrial process. Unfortunately, many promising technologies never see the light of day; some because of perpetual piloting programs aimed at solving minute process issues, others due to unanticipated technical problems resulting from fast-tracking the technology to full-scale. Both of these scenarios lead to cash burns that can eventually kill the project.

A systematic approach to the early technical development of a new process can be achieved through fundamental and empirical approaches. This typically involves process-modeling and computer simulations that have been previously validated by laboratory and bench-scale testing. Subsequent pilot plants and cold-flow mock-ups provide additional process and engineering knowledge. But once all the pilot systems are successful, the desired cold-flow mock-ups completed and all the simulations validated, the true challenges of scaleup decisions begin. Further development to demonstration or commercial scale does not involve only technical decisions, but also requires compromises of both engineering and business considerations, since there are always restrictions on time and money.

The expectation of new learnings is the main reason for a staged scaleup strategy. However, collective experience shows that the most common and difficult challenges encountered during chemical process scaleup are particle formation, liquid/liquid separation, agitation and the presence of trace impurities [1]. Buildup of contaminants in the process impacts the performance of full-scale industrial units much more than at pilot scale, where concentrations are typically lower. Reactors that involve complex kinetics also cause major scaleup problems, as do processes involving liquid and solid reactants [2]. Process conditions also tend to change, as size-related impacts, such as wall effects and mixing quality, influence reactions. For example, a familiar truism is that reactions take longer and run hotter in the commercial plant than at pilot scale [1]. Despite best efforts in piloting, there are still typically many unforeseen issues that present themselves during the commissioning of commercial processes.

There are also many practical aspects to scaling a process. At the pilot scale, one of the biggest challenges that engineers encounter is equipment selection. The large variety of technologies for pumps, valves, heat exchangers and other components are often unavailable at small scale. This is particularly true for high-pressure and high-temperature applications. Also, because these pilot projects typically consist of one-off builds, vendor support is limited.Thus, engineers must sometimes force the use of available technology into unintended applications, which can create process problems and operational difficulties that would not exist at a larger scale. Additionally, this can lead to a process design that is ultimately so dissimilar to the eventual commercial process that the intended proof-points are not achieved.

The notion of process integration is also important. In a demonstration plant, it is typically desired to close mass balances around operations in order to gain a better understanding of the process. This requires additional instrumentation and waste recovery not seen at commercial scale. Heat recovery is also required, since frequently the demonstration’s objective is to estimate process economics.

Finally, the proper design of containment and relief systems is critical not only to the safety of personnel, but also ultimately to the success of the project. Chemical buildup, unanticipated reactive chemistry, inappropriate materials of construction and other failure modes can cause industrial accidents that, even at a smaller scale, can rightly lead to inquiries, re-designs and management concerns that may delay or even cancel a project.

The capital expense required to build pilot- and demonstration-scale plants can be significant, ranging from the low single-digit millions to several dozen millions of dollars. Because these plants are not commercial and generally do not produce revenue, financing can be challenging, particularly for startups in capital-intensive industries. Sometimes these plants are dismantled or abandoned after they have served their purpose. Obviously, the larger the scale, the larger the cost — but the relationship between scale and cost is not linear, instead roughly following the sixth-tenths factor rule [3]. Equation (1) illustrates this rule, where the subscript A represents the pilot-scale parameters and the subscript B represents the scaled-up parameters.

Not only are capital costs inordinate at pilot scale, but operating costs are higher per unit volume than a commercial facility because of the lack of economies of scale. Direct production costs, such as feedstock and labor, are proportional to plant capacity, so larger demonstration plants drive operating costs higher. These increased costs can be absorbed in large multinational companies, but can be problematic for smaller firms.

Overall, however, the most important aspect for new process development is the time to commercialization. Delays in revenue generation can lead to project cancellation due to fluctuations in economic conditions and the loss of first-mover advantage. Also, managers can change priorities and investors can lose interest. The latter is a crucial concern, particularly for pre-revenue startup firms with high cash-burn rates. In these cases, it is often required to accept faster scaleups and higher scaleup factors, with implied higher technical risk, in order to commercialize sooner and generate cash-flow.

All projects have risks and uncertainties that must be evaluated and mitigated. This is particularly true for new processes. The goal in assessing risk is to compare options on an objective basis so that a suitable strategy can be developed. While a qualitative risk assessment of technology using subject-matter experts can be helpful, it can lack objective evaluation and comparison. Quantitative risk analysis, on the other hand, provides cost/benefit assessment of different options, resulting in a more objective decision-making process — one based on supportable facts rather than oft-differing opinions. Additionally, since many key variables usually change together, a quantitative risk analysis can efficiently correlate the various risks.

The quantitative risk analysis process consists of listing all project risks, namely, those related to technology, commercialization and execution. These risks are then assigned, by subject-matter experts, a probability of occurrence. For each of these risks, the statistical average and standard variation is calculated. Finally, a Monte Carlo simulation is conducted on the data. The end result is an average outcome with a given probability distribution. Different scaleup strategies, with their own individual risk profiles, can thus be objectively compared. Comparisons are generally based on net present value (NPV) of the scaleup option, which takes into account capital expenditures, operating cost and revenue, as well as the timing of these cash flows. This can be a powerful tool for management review and decision making.

When evaluating scaleup options, the most significant project risks are relatively predictable — total capital expenditure, the process unit’s ability to operate, basic technology performance, including yields and sensitivity, and project scheduling are all of significant importance [4]. Risk-mitigation activities, such as equipment testing, cold-flow models and validated process simulations, will lower the various risks’ probabilities, thus directly impacting the quantitative risk analyses’ results and the project’s NPV. As such, the risk analysis is not a static model, but is rather used to identify the key risks that impact results, directing the risk-mitigation efforts. 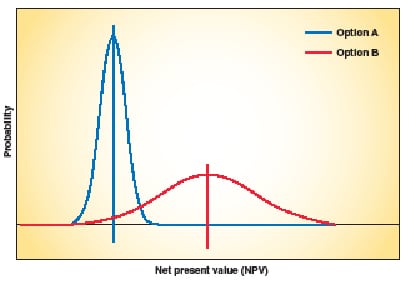 Figure 1 shows an example of a risk assessment of two distinct commercialization strategies. Option A consists of multiple pilot programs and a fully integrated demonstration facility. Because most technical risks, both large and small, have been resolved, the risk assessment would show a fairly tight distribution of outcomes. However, the capital requirements are much higher, not only from direct expense of pilot and demonstration facilities, but more importantly, because of the delay in reaching commercial scale and generating revenue. The result is a low NPV. Alternatively, Option B calls for fast-tracking the project to commercial scale. More technical unknowns remain, and a smooth startup is less certain, resulting in a wide distribution of outcomes, but less capital deployment and a quicker time to market result in a higher average NPV than the seemingly “more certain” Option A.

Admittedly, Option B is riskier in that the outcome is rather unpredictable. Solving technical issues at the industrial scale is obviously the most costly option, because of the higher cost of the the larger equipment and longer time required to make repairs, but also due to the high cost of having a large industrial complex sit idle as the process is re-engineered. Although more commissioning issues are expected, the cost to correct these may still be lower than the time and money required for a lengthy scaleup, resulting in the higher overall NPV. Under these conditions, it is possible that the risk/reward analysis leads to a decision to fast-track the project and entirely forego a demonstration build by immediately constructing a commercial plant.

Most importantly, the information derived from the assessment will identify the biggest risk drivers, and engineers can then focus on the risk-mitigation activities that will have the biggest impacts in tightening the distribution of outcomes without taking excessive time. With targeted efforts on the key scaleup issues, many startup problems can be avoided. The resulting NPV and distribution would fall somewhere between Options A and B, and may very well be the most palatable plan to management and investors.

Scaleup is defined as the successful startup of a commercial size unit based upon testing at smaller scale. Scientific approaches, both fundamental modeling and experimentation, are typically used in the early stages of process development. Once the process is deemed commercially viable, engineering and business criteria determine the scaleup strategy, eventually arriving at full commercialization. Often constrained by cost and time, engineers must take calculated risks in bringing a process to industrial production. These risks must be evaluated in terms of financial consequences and compared with the inherent costs required by additional testing at an intermediate scale to further increase process and scaleup knowledge.

Mike Simard, P.E. is currently engineering director at Renmatix Inc. (660 Allendale Rd., King of Prussia, Pa. 19406; Phone: 484-751-4000; Email: Mike.Simard@renmatix.com), where he has has helped in leading the design and engineering aspects of the commercialization of the Plantrose process. He also managed the bricks-and-mortar implementation from procurement to construction for Renmatix’s BioFlex Conversion Unit and D3K demonstration plant. He also worked in the building materials and power-generation industries with GE. Simard holds an M.S. degree in mechanical engineering from the University of Montreal and an M.B.A. from Simon Fraser University.