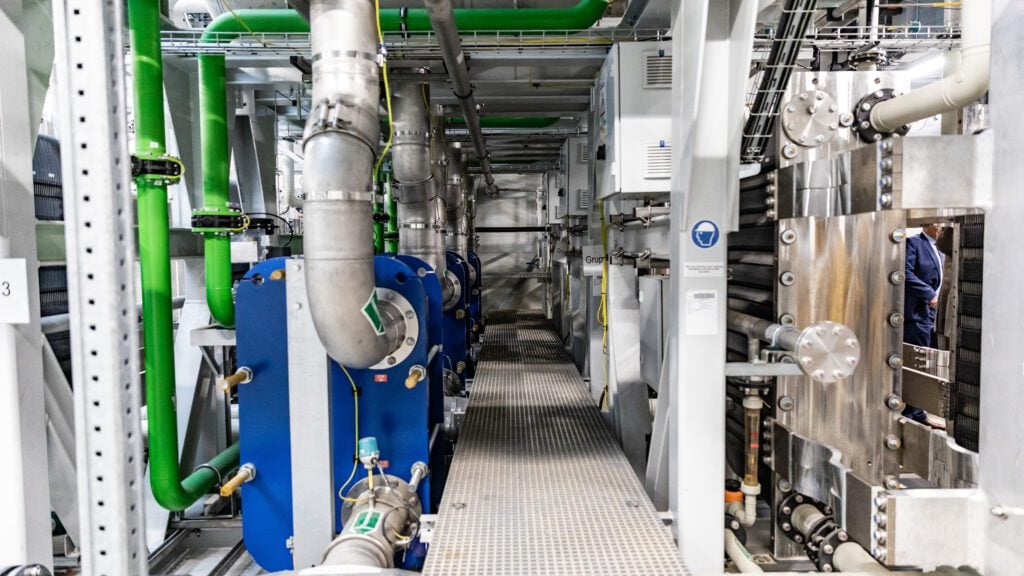 Up to 1,350 ton/yr of green hydrogen can now be generated from renewable solar and wind power in the Wunsiedel Energy Park. Hydrogen is generated by an electrolyzer — with a total capacity of 8.75 MW — from Siemens Energy’s latest and most powerful product line. The “Silyzer 300” is based on proton exchange membrane (PEM) technology, which is optimally suited for operation with renewable energies. The hydrogen will be used primarily in the region’s industrial and commercial enterprises, but also in road transport. With this amount of hydrogen, 400 40-ton hydrogen-powered trucks could — assuming a regional distance of 150 km/d — drive for an entire year without emitting any CO2. By using the hydrogen generated in Wunsiedel and the related replacement of fossil fuels, annual CO2 emissions can be cut by up to 13,500 tons.

As general contractor, Siemens Smart Infrastructure is responsible for the construction of the hydrogen plant and the creation of an intelligently monitored and controlled power grid. The customer for green hydrogen is the regional business community — encompassing everything from the glass and ceramics industry to transport companies, automotive suppliers and the neighboring sawmill. The hydrogen will be distributed by truck trailers on a decentralized basis to end customers mainly within a radius of around 150 to 200 km (Northern Bavaria, Thuringia, Southern Saxony and Western Bohemia). In addition, following the construction of an H2 filling station at the Wunsiedel Energy Park, scheduled for completion in 2023, the regional fleet of commercial vehicles can be decarbonized.

“With global warming, energy dependency and rising costs becoming increasingly pressing issues, real-world solutions for the future of energy are crucial,” said Matthias Rebellius, Member of the Managing Board of Siemens AG and CEO of Smart Infrastructure. “The Wunsiedel project is an excellent demonstration of how vision and initiative combined with the right technology and financing can drive forward the development of a carbon-free power supply.”

Siemens Financial Services is supporting the project with an intelligent financing concept and holds a 45% stake in the operating company WUN H2. Rießner-Gase, located in Lichtenfels also holds a 45% stake and the utility company Stadtwerke Wunsiedel (SWW) the remaining 10%.

“Future-oriented projects need a solid financing basis,” said Veronika Bienert, CEO of Siemens Financial Services, the financing arm of Siemens AG. “In Wunsiedel, we teamed up with an external lender, the UmweltBank in Nuremberg, to implement the first non-recourse project financing — in other words, financing without counter-liability to the shareholders — for such a plant in Germany and thus demonstrate the project’s economic feasibility.”

In Wunsiedel, the energy transition is already a reality. The energy used by the community of 10,000 is 100% climate neutral. Wunsiedel also generates its own electricity and heating. The hydrogen generation plant will be linked to Siemens’ existing battery storage facility and with neighboring industrial enterprises, which can use, for example, its waste heat or the oxygen split off during electrolysis. Hydrogen also plays a major role in Germany’s decarbonization strategy to make transportation, steel production and the chemical industry carbon- neutral, since it can be used to implement many processes previously dependent on fossil fuels, without releasing CO2 in the reconversion into energy. Hydrogen is also an important storage provider for renewable energies. By 2030, 10 million tons of green hydrogen are to be generated annually in the European Union alone.

With the commissioning of the hydrogen generation plant, the commercial production of the energy source H2 in Wunsiedel will begin. Talks regarding the expansion of the plant’s capacity to 17.5 MW are already underway.