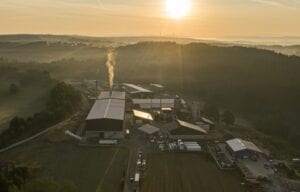 Siemens Smart Infrastructure (Zug, Switzerland) and WUN H2 GmbH signed a contract to build one of the largest hydrogen production plants in Germany. It will be built in Wunsiedel in the north of Bavaria. With a power intake of 6 MW in the initial development phase, the plant will run solely on renewable energy and will be CO2-free. The electrolysis plant from Siemens Energy will have the capacity to produce over 900 ton/yr of hydrogen in this first phase. When fully expanded, it will be able to supply up to 2,000 ton/yr. Groundbreaking is scheduled for the end of this year and commissioning at the end of 2021.

Germany has pledged to be greenhouse gas-neutral by 2050. To this end, all sectors that use energy, such as transportation and industry, must press ahead with decarbonization. The plant in Wunsiedel will serve as a model for all of Germany. It will convert the renewable energy available in this region, for example, from photovoltaics and wind power, into storable hydrogen, making it available for applications in mobility and industry. This is especially useful when, on sunny and windy days, more energy from renewable sources is produced than needed.

The electrolysis plant will be built in the Wunsiedel Energy Park next to the Siemens manufactured battery storage facility already in operation, complementing the forward-looking energy concept. “This project is another element of a successful technology partnership between Siemens and SWW Wunsiedel GmbH. We want to achieve locally already today what Germany is targeting for 2050, namely a complete energy transition across all sectors,” stated Uwe Bartmann, CEO of Siemens Germany and CEO of Smart Infrastructure Regional Solutions & Services Germany.

The project will give the northern Bavaria region its very own hydrogen source. Until now, gas for end customers had to travel a relatively long way. The hydrogen will be filled into gas cylinders for local distribution and shipped by truck to local and regional end customers, mostly in Upper Franconia, the Upper Palatinate, southern Thuringia and Saxony, as well as Western Bohemia (Czech Republic). The plant will also help ease grid bottlenecks and provide flexibility for the grid. A public hydrogen filling station for trucks and buses may be added later at the same location to aid the conversion of heavy-duty traffic and public transportation to CO2-free drive technology.

When hydrogen is produced from water electrolysis using only power from renewable energy sources, it is known as “green” hydrogen. A Silyzer 300 from Siemens Energy will be used in Wunsiedel. The plant will feature high efficiency at high power density as well as low-maintenance and reliable operation – without chemicals. The PEM electrolysis process will be applied, in which electricity is used to split water into hydrogen and oxygen. The PEM, or proton-exchange membrane, allows protons to pass through but stops gases such as hydrogen or oxygen. In an electrolytic process, the membrane functions as a separator, among other things, and prevents the resulting gases from mixing. Compared to traditional alkali electrolysis, PEM technology is ideally suited for utilizing fluctuating wind and solar electricity because of its highly dynamic method of operation.

“For the first time, the oxygen and the low-temperature waste heat generated during production are planned to be reused by nearby industrial operations. This will result in maximum energy efficiency and a plant that is unique because all element flows will be utilized. In addition, electrolysis is an important building block toward implementing the ‘WUNsiedeler Weg – energy’, where we make sustainably energy use and climate protection a reality,” explaines Marco Krasser, CEO of SWW Wunsiedel GmbH.