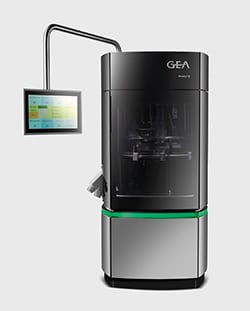 This company’s “next-generation” tableting technology will be showcased at Interphex (April 26–28; New York, N.Y.). Launched last year at Achema 2015, the Modul Q rotary tablet press (photo) features the company’s Exchangeable Compression Module (ECM). The new version of the ECM is even more convenient to use and offers a higher level of containment performance. With easier access for cleaning and set-up operations and improved functionality, the Modul Q also incorporates the Exchangeable Die Disc, which was only previously available on the Performa P press. Operationally, the Modul Q has a bigger pitch diameter and, in terms of size, will be positioned between the Modul P and Modul S. The use of A-type tooling is now possible, which allows 51 punch stations to be incorporated and an output of up to 367,200 tablets per hour to be achieved. — GEA Group AG, Düsseldorf, Germany